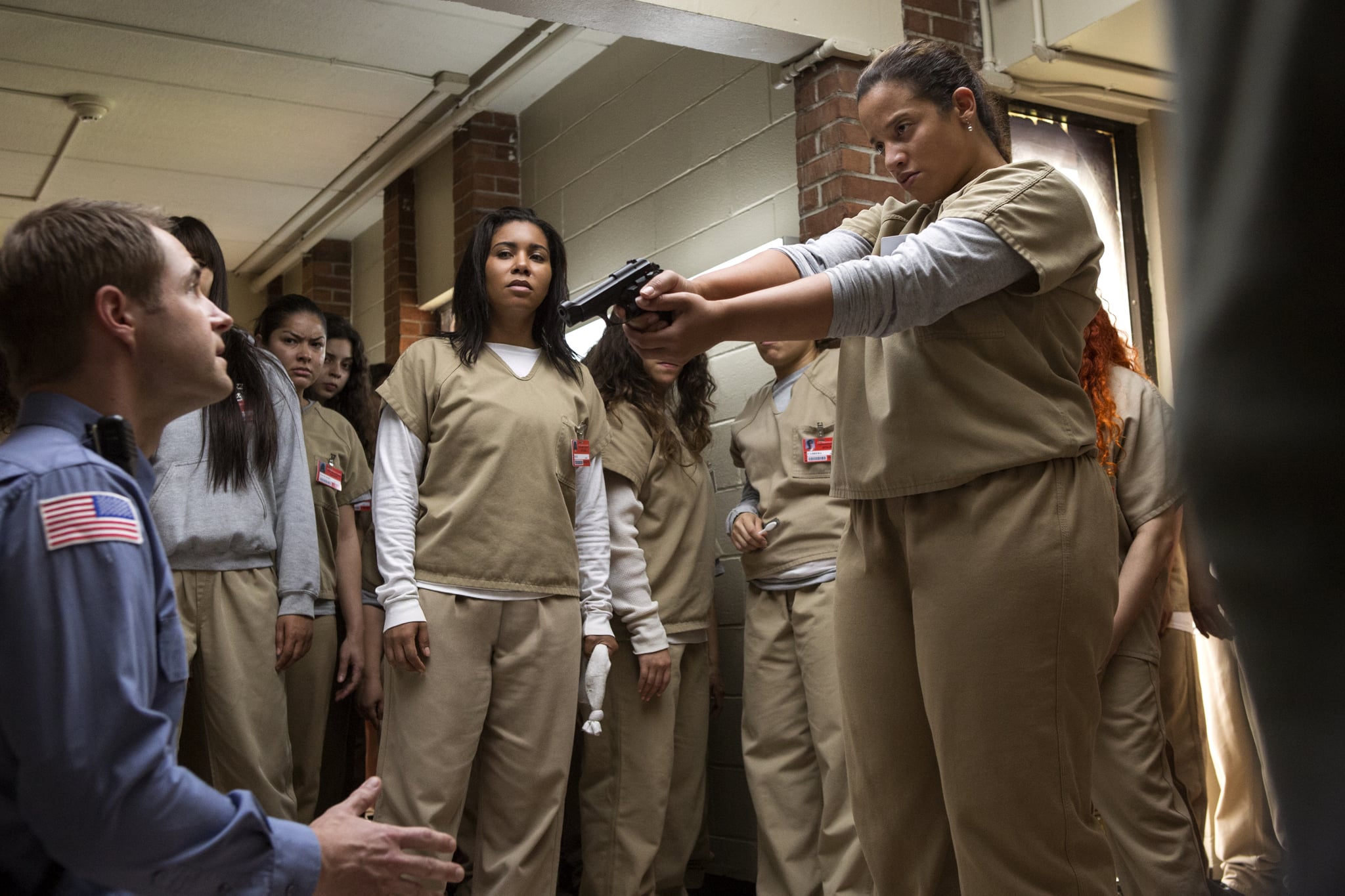 The new season of Orange Is the New Black definitely didn't disappoint. We're still freaking out about all the shocking moments; chief among them are the deaths of two characters. The first one you probably suspected was coming, but the second one comes out of nowhere (and made us that much more excited for season six)! Deep breath, everyone. Here's how the fatalities go down.

At the end of season four, we were left with a serious cliffhanger. The inmates have had enough of the conditions and treatment at Litchfield Penitentiary, and the last straw is Caputo failing to properly acknowledge the death of Poussey Washington on television. They begin a riot, charging the hallways in anger. Though it's against the rules of the prison, Corrections Officer Thomas Humphrey (Michael Torpey) brings in a gun. He reaches for it during the uproar but drops it . . . and Daya picks it up. A huge crowd surrounds Daya as she holds the gun on Humphrey, who is kneeling in front of her. He pleads for his life by telling a childhood story, probably to humanize the situation. But when he switches to speaking in Spanish and doesn't shut up like Daya says, she shoots him in his upper thigh. Little does he know that she's basically the only Latina in the prison who doesn't speak Spanish.

We're not saying he deserved it, but we aren't sad to see him go. Remember how he holds a gun on Maritza and forces her to choose between eating 10 flies or swallowing a live baby mouse in season four? Many people would agree that he was on a serious power trip and used his authority to treat inmates inhumanly. 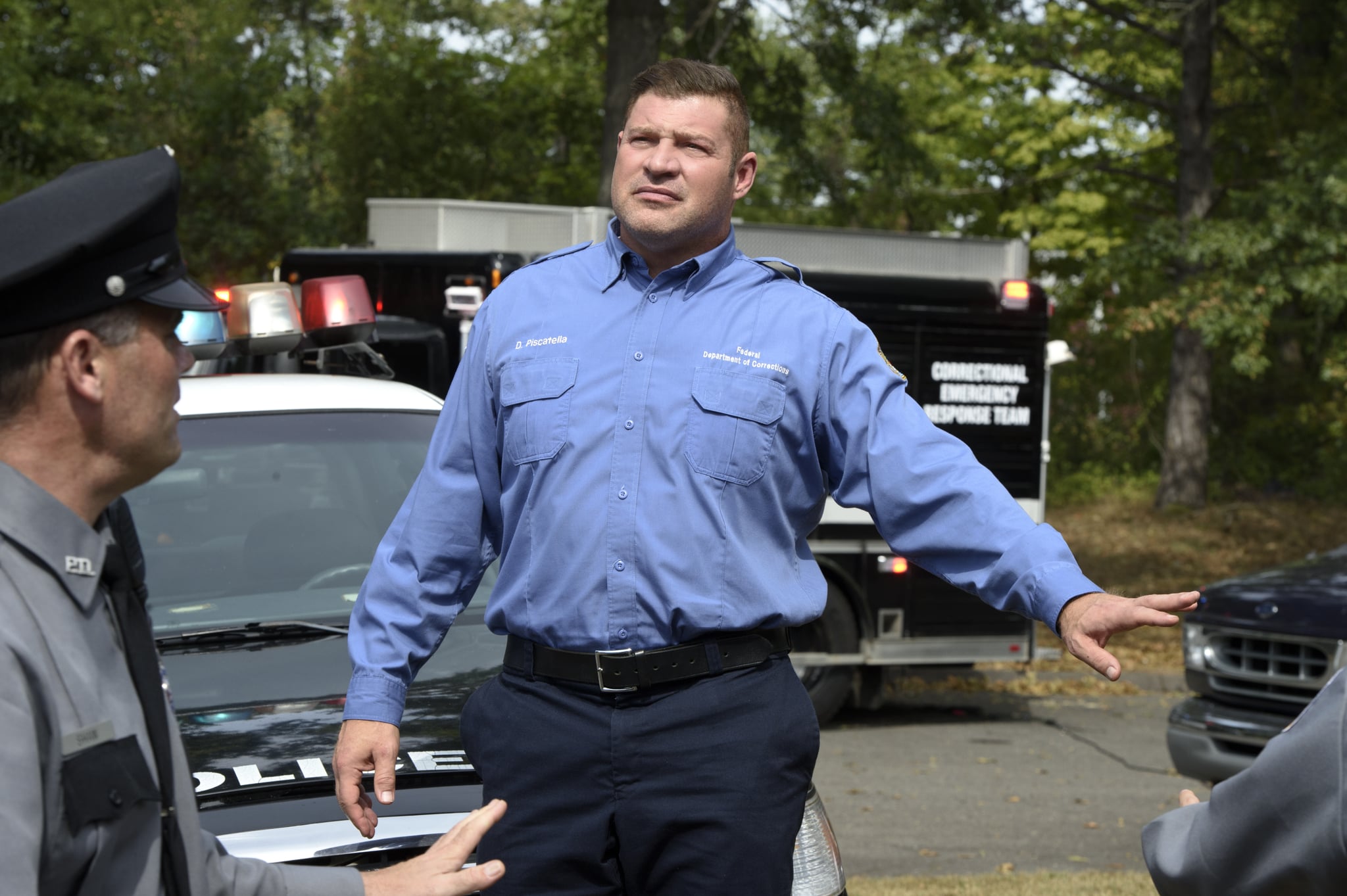 This is the one that we didn't see coming. We first meet Desi Piscatella (Brad William Henke) in season four, where he is a guard for the maximum-security facility on the Litchfield property, and right away we knew he's not playing around. When the general population needs some order, they bring in Piscatella and the inmates get a rude awakening.

In season five, he sneaks into the prison during the riot and causes even more chaos. One by one, Piscatella starts capturing women. He ties up Piper, Alex, Boo, Nicky, Blanca, and Red and keeps them in a vacant room in the prison away from the other inmates. During this time, he cuts off Red's hair, breaks Alex's arm, slaps Nicky across the face, and spews out heinous statements. We learn Piscatella's brutal backstory throughout, and it alludes to his current violent behavior.

So, how does he die? Other inmates hear Piper screaming and devise a plan to attack Piscatella, and it works. The captured women are freed, and they tie him up. In the last episode of season five (after all the other inmates have been evacuated from the prison besides those women), Red decides to let Piscatella walk out of the facility by himself. At the same time, the SWAT team is closing in on the remaining inmates. When Piscatella steps out into the dark hallway and is in the process of identifying himself, one of the younger SWAT team officers shoots him in the head. It's quick, jaw-dropping, and totally unexpected.

Hulu
This May Be Shrill's Final Season, but We'll Jam to This Soundtrack For Life
by Amanda Davis 2 hours ago

Nostalgia
The One Where They Get Back Together: Watch the First Teaser For the Friends Reunion
by Monica Sisavat 8 hours ago