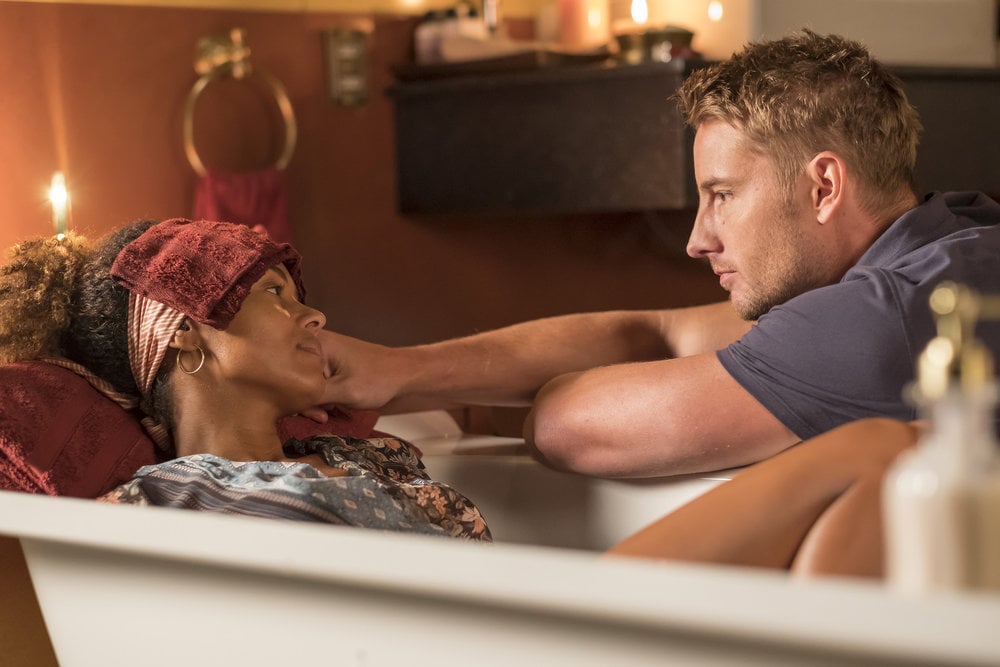 There are some pretty iconic romances on This Is Us, but one that took us by surprise was Zoe and Kevin's. This season, we've seen their relationship blossom as they lean on each other, help each other through personal struggles, and ultimately begin to fall in love. In episode seven, the couple grow even closer when Zoe eats some "bad bat" during their trip to Vietnam. While her sickness could be passed off as food poising, a lot of fans began to wonder: is Zoe pregnant?!

It also didn't help that after the episode, actor Justin Hartley shared a side by side photo of Kevin comforting Zoe and Jack comforting Rebecca during her pregnancy writing, "Like father, like son." While it would be an unexpected twist for Kevin and Zoe to have a baby together, what if the real twist is that they decide to give it up for adoption?

Related:
Get to Know Beth's Cousin on This Is Us, Because You'll See a Lot of Her This Season

Shortly after the episode aired, a few Reddit users theorized that Kate might have another miscarriage and end up adopting her brother's baby. That way, she would still have a "piece of Jack" like she always wanted since the baby would biologically be Kevin's. Other users went even further, theorizing that Kate and Kevin might actually raise the baby together.

In the flash-forward, Toby isn't wearing a wedding ring, leading many people to think he and Kate eventually get a divorce. If Kate and Toby do go their separate ways, she could be longing to have a family of her own. Maybe after Zoe finds out she's pregnant, she decides that she doesn't want to raise a kid with Kevin, so Kate offers to help.

Chrissy Metz did say that Toby and Kate would have "an unconventional parenting situation." "Not unconventional in that people aren't doing it, but not what I think either of them ever had in mind," she told Entertainment Weekly. It doesn't get more unconventional than raising a baby with your brother. She added that the development in her character's story has been scary but exciting. "It's something I don't think we've ever seen, at least not on network television."

Eric Dane
Nate's Dad's DVD Is Missing on Euphoria — Who Took It?
by Toria Clarke 11 hours ago

Identity
Why Do Latinx Shows Keep Getting Canceled?
by Johanna Ferreira 12 hours ago

ABC
Will the Queens Make Another Comeback For Season 2?
by Njera Perkins 14 hours ago