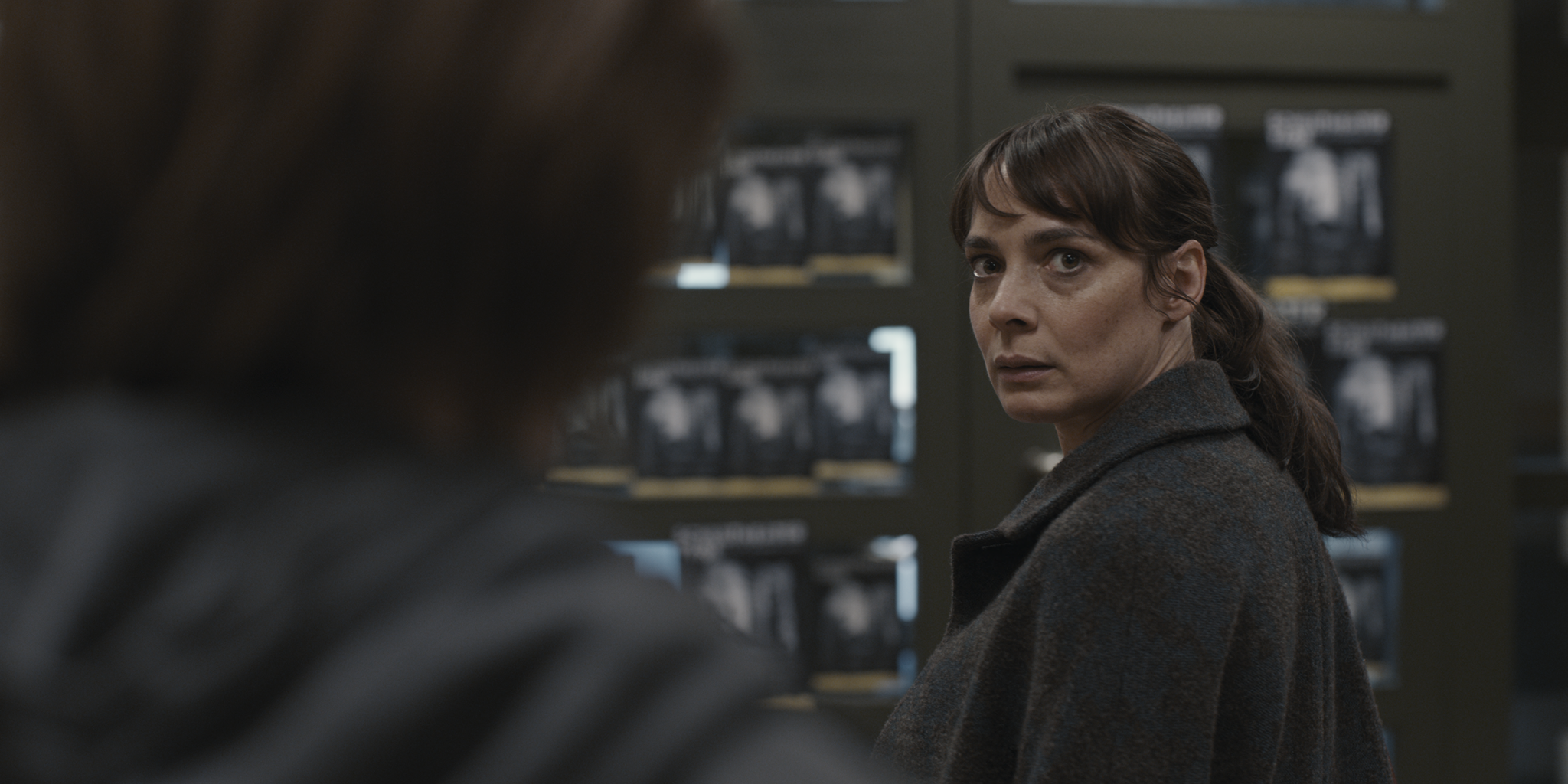 Season three of Netflix's Dark has finally hit the streaming service (on the day of the fictional apocalypse!), and reader, things in Winden are more confusing than ever. One of the most mind-blowing concepts of season three? That Hannah Kahnwald, Jonas's mother, becomes pregnant, not once but twice . . . in two different realities.

In addition to the three main decades involved in the show's never-ending time loop, at the end of season two, we were introduced to an alternate Martha Nielsen, who explains that she comes from another reality. If this first world is Adam's world — Adam being the Sic Mundus "traveler" who Jonas eventually turns into — alternate Martha's reality is Eva's world. Eva — the woman Martha eventually becomes — is the puppeteer of this world, which is also plagued by reoccurring time loops involving most of our characters. And in both worlds, Hannah is expecting, though in completely different circumstances.

Keep reading to find out how Hannah's pregnancies play out in both realities (but be warned, there are major spoilers ahead!).

In season two, we left Hannah in 1954, where she decided she'd stick around after getting some pretty hefty revenge on Ulrich Nielsen, who'd been locked up in jail for months thanks to a young Egon Tiedemann. As it turns out, Hannah ends up sticking around with Egon, whom she begins an affair with under the name Katharina. Hannah becomes pregnant, and once a panicked Egon suggests she "take care of it" because he's still married to Doris, Hannah leaves. She nearly has an abortion but decides against it after meeting a young Helene Albers and introducing herself as Katharina (which we know Helene then goes on to name her daughter).

We don't see Hannah again until much later in the season, when she uses the time machine she still has in her possession to visit the Sic Mundus headquarters (the Tannhaus property) in 1911 with a 5- or 6-year-old daughter. She meets Bartosz Tiedemann in front of the property, where he, Franziska Doppler, Magnus Nielsen, and Jonas — who has become a young Adam by this point — have been since 1888, where they traveled to at the moment of the apocalypse in 2020. It's here that Bartosz recognizes Hannah's daughter as Silja, though he met her as a young adult 21 years prior. (Reminder: we first meet young adult Silja in the final moment of season one in the year 2052, when she welcomes 2019 Jonas to the future and promptly knocks him out.)

It's unclear where — or when — Hannah gives birth to Silja, but those details aside, by this point in the season, we know Silja actually has a much larger role in the time loops beyond being a half sister to Jonas and the lovechild of Hannah and Egon.

Related:
Netflix's Dark Finally Revealed the Origin of the Time Loops, and My Head Is Still Spinning

In Eva's world, Mikkel Nilsen never goes missing, therefore Michael Kahnwald doesn't exist, so neither can Jonas. Although Ulrich and Katharina still marry and go on to have their three kids in Eva's world as they do in Adam's world, this alternate version of the couple ultimately splits up, and Ulrich goes on to marry Hannah (though Ulrich is still a cheater, this time with Charlotte Doppler). In 2020, the pair are living in Ulrich's home and expecting a baby together soon.

While the apocalypse occurs on June 27, 2020, in Adam's world, Eva's world doesn't see its demise until November 2020. As this parallel apocalypse is going down at the end of episode six, we see Hannah sitting at her and Ulrich's dining room table with a gun in her hand. During the montage of preapocalyptic events slotting into place, we see Hannah suddenly stand, her dress bloodied from the hips down. It's unclear what's happening to her and whether this is occurring naturally or as a result of the apocalypse's events, but either way, Hannah's final view before the world is destroyed is old Egon, who was sent into this time period by Eva to "create your past and preserve your family tree." He walks into the dining room as Hannah is holding her pregnant stomach — they aren't shown perishing in the apocalypse, but we don't see them again.

Although it appears as though it should be impossible that Hannah conceived Silja in Eva's world at all, because the father of her child is Ulrich, not Egon, Silja still has to exist in order to give birth to Agnes, who gives birth to Tronte, who has Ulrich, and so on. It's likely that old Egon brought Hannah back to the past to have the same affair with a younger Egon as she did in Adam's world, but we'll never know for sure. The particular dynamics of this loop seemingly go unanswered, like so many of Dark's finer details.