Sweet boy. The fastest brain in the game. Your creativity, endless. Immortal. Rest in power. I can’t even explain the sadness.

Halsey is remembering her late friend Juice Wrld. On Tuesday night, the 25-year-old singer dedicated her song "Without Me" to the rapper while performing at a Pandora Live concert in NYC. Halsey and Juice Wrld collaborated on the remix back in January. "The remix of this song is the better version of this song," she told the audience. "And I think everybody knows that deep down inside. But I really want to play it tonight for him."

"So, while we have every single one of us together in one place, I just wanted to take a moment to remind you guys that life is short," she continued. "We should appreciate every single moment that we have together. Promise me to sing along loud?"

Juice Wrld (née Jarad Anthony Higgins) died after suffering a medical emergency at Chicago's Midway International Airport on Dec. 8. He was 21. Halsey previously paid tribute to him with a photo of the two on Instagram. "Sweet boy. The fastest brain in the game," she wrote. "Your creativity, endless. Immortal. Rest in power. I can't even explain the sadness." Watch Halsey's emotional performance ahead. 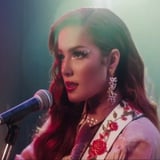