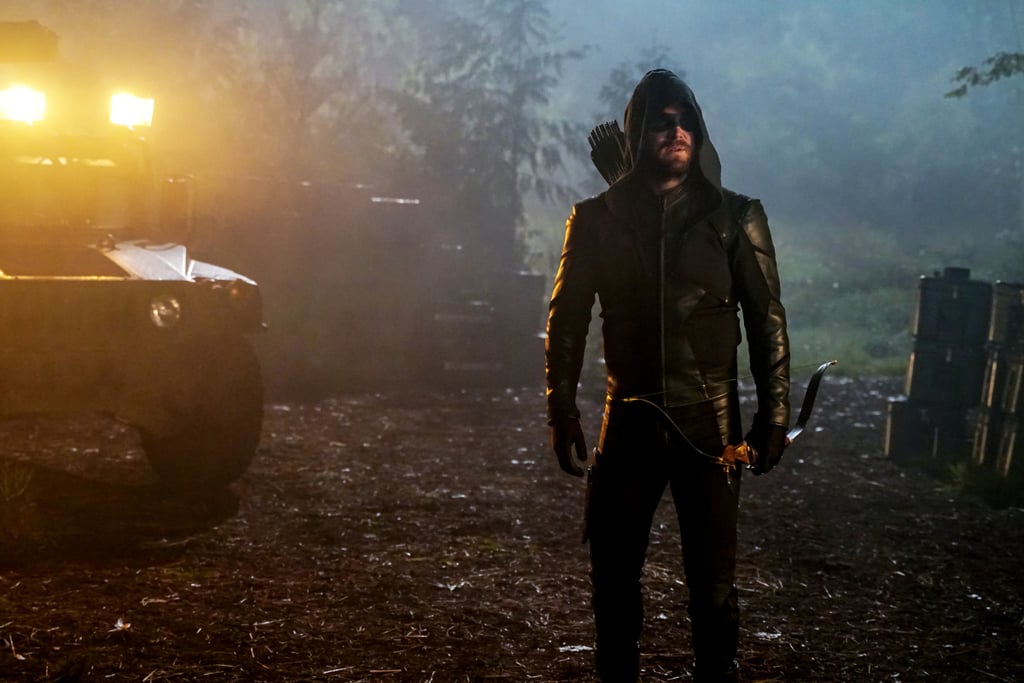 The CW's Crisis on Infinite Earths event wrapped on Jan. 14, and it confirmed what fans have known for years: when Arrow comes to an end, Oliver Queen (Stephen Amell) won't make it out alive. Over the course of five episodes, we watched our favorite heroes from Arrow, The Flash, Supergirl, Legends of Tomorrow, Black Lightning, and Batwoman battle the Anti-Monitor to save the multiverse — and they did. But, fittingly, it came at the cost of Oliver's life.

After sacrificing himself to save Earth-38 in part one of the crossover, the archer was initially brought back, thanks to the Lazarus Pit. But, as fans remember from characters' previous experiences with the pit, Oliver's lost soul is irredeemable. His cause, however, is not. So when Jim Corrigan (Stephen Lobo) shows up in the afterlife to bestow a cosmic power onto Oliver, the green crusader accepts, becoming Spectre. He uses his newfound abilities to help his superhuman friends endure the Speed Force — taking us on a trip down Arrow's memory lane — before combating the big bad leader of the shadow demons. Spectre manages to overcome the monstrous creature, help defeat the Anti-Monitor, and transform into a spark that kickstarts a world-renewing flame. But, of course, the conflict leads to Oliver's final death.

Related:
Arrowverse Heroes Suit Up to Defend the Multiverse in "Crisis on Infinite Earths" Photos

We've seen Oliver seemingly die over and over again, but it definitely seems like this one will stick. "Yes, he is really dead this time," showrunner Beth Schwartz confirmed to The Hollywood Reporter. "Because the whole point of this death and the culmination of what brings us to the crossover is that everything he's learned throughout the series and these past eight years has led him to this moment to give the ultimate hero's sacrifice. And that's his life — to save everyone else."

The lingering question now is how the rest of Arrow's eighth and final season will address Oliver's death. In season seven's flash-forward, Felicity (Emily Bett Rickards) — who will return for the series finale — is joined by adult William (Ben Lewis) and Mia (Katherine McNamara) as they visit Oliver's grave. She prepares to leave the safehouse where the trio is hiding from Ninth Circle agents and says an emotional goodbye to her children, hinting that she won't be returning. After she leaves, she meets up with The Monitor who tells her, "Where I'm taking you, there is no return." Adamant about journeying to a place unbeknownst to viewers, she replies, "I have waited a very long time to see him. I'm ready."

We don't quite know how that will tie back to the recent events, but we do know that the hero who started it all — the founder of the Arrowverse — is gone. Naturally, fans are emotional and have taken to Twitter to express their sorrow and gratitude for the Green Arrow. Look ahead to read some of the best reactions.

Related:
Say Your Goodbyes — These 38 Shows Are All Ending in 2020
Previous Next Start Slideshow
ArrowFall TVTVTwitter ReactionsCW