John Boyega is getting candid about his experience playing Finn in the Star Wars franchise. In his first major interview since completing the film series, Boyega spoke to British GQ about some of the challenges he faced as a Black man, both on and off screen. He recalled working with a stylist who cringed at the clothes he wanted to wear during press tours and noted that a hairdresser who didn't know how to do his hair "still had the guts to pretend." Eventually, the 28-year-old star recognized the importance of knowing his worth. "During the press of [The Force Awakens] I went along with it," he said. "And obviously at the time, I was very genuinely happy to be a part of it. But my dad always tells me one thing: 'Don't overpay with respect.' You can pay respect, but sometimes you'll be overpaying and selling yourself short."

Boyega then spoke on some of the issues surrounding his character development, or lack thereof, while portraying Finn in 2015's The Force Awakens, 2017's The Last Jedi, and 2019's The Rise of Skywalker. "It's so difficult to maneuver," he said. "You get yourself involved in projects and you're not necessarily going to like everything. [But] what I would say to Disney is do not bring out a Black character, market them to be much more important in the franchise than they are and then have them pushed to the side. It's not good. I'll say it straight up." He expressed the same concern for other cast members of color, including Naomi Ackie (Jannah), Kelly Marie Tran (Rose Tico), and Oscar Isaac (Poe Dameron), noting the restructured character echelon of The Last Jedi.

"[But] what I would say to Disney is do not bring out a Black character, market them to be much more important in the franchise than they are and then have them pushed to the side."

"Like, you guys knew what to do with Daisy Ridley, you knew what to do with Adam Driver," he said. "You knew what to do with these other people, but when it came to Kelly Marie Tran, when it came to John Boyega, you know, f*ck all. So what do you want me to say? What they want you to say is, 'I enjoyed being a part of it. It was a great experience . . .' Nah, nah, nah. I'll take that deal when it's a great experience. They gave all the nuance to Adam Driver, all the nuance to Daisy Ridley. Let's be honest. Daisy knows this. Adam knows this. Everybody knows. I'm not exposing anything." The actor went on to defend director J.J. Abrams after The Rise of Skywalker received mixed reactions. "Everybody needs to leave my boy alone," he added. "He wasn't even supposed to come back and try to save your sh*t." 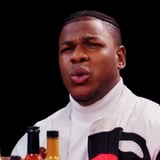 Hot Ones: John Boyega Says Anakin Is a Better Jedi Than Rey and Nearly Loses His Mind

Boyega's sentiment affirms many of the experiences Black Hollywood stars grapple with. While grateful for onscreen opportunies, the actor acknowledges that there's still work to be done to make the industry more inclusive and characters of color more valued. Boyega's stance on racial equality struck a particular chord in June when he delivered an emotional speech at a Black Lives Matter protest in London. "Black lives have always mattered," he told a crowd at Hyde Park. "We have always been important. We have always meant something. We have always succeeded regardless . . . I need you guys to understand. I need you to understand how painful this sh*t is. I need you to understand how painful it is to be reminded every day that your race means nothing. That isn't the case anymore. That is never the case anymore."

The actor reflected on the demonstration in British GQ, saying he intended to "protest quietly." But when the Black Lives Matter organizers asked him to speak, he stepped up to the plate with an emphatic speech. "I feel like, especially as celebrities, we have to talk through this filter of professionalism and emotional intelligence," he told the outlet. "Sometimes you just need to be mad. You need to lay down what it is that's on your mind. Sometimes you don't have enough time to play the game."