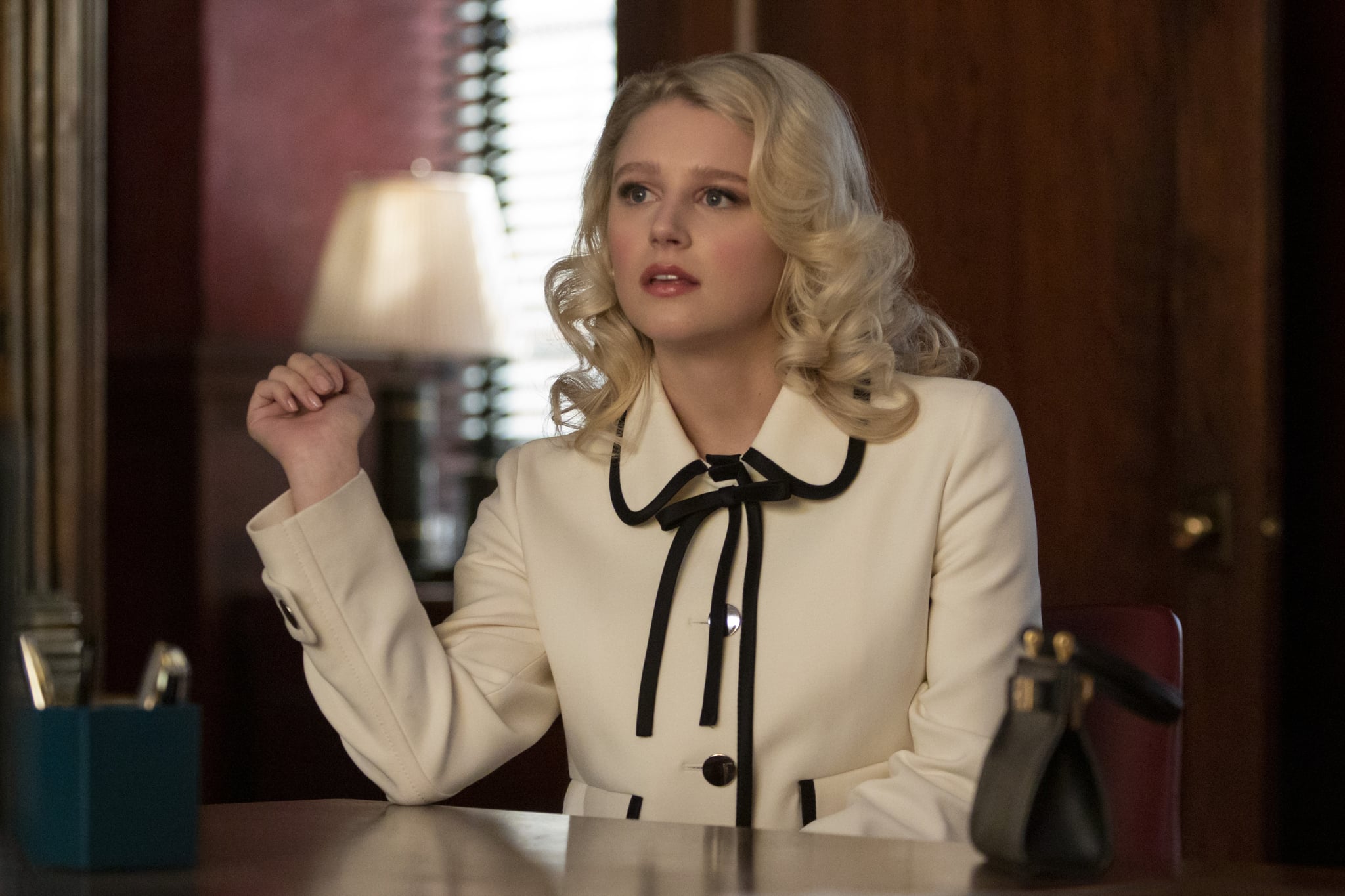 When you think of political power couples, you think of people like John F. Kennedy and Jacqueline Kennedy or Barack Obama and Michelle Obama. The Politician's power couple is the determined Payton Hobart (Ben Platt) with the effervescent Alice Charles (Julia Schlaepfer) by his side. While their relationship often takes a back seat to Payton's political ambitions, it's their "will they/won't they" charm that had me rooting for them throughout seasons one and two.

I consider myself a big shipper of Payton/Alice — however, by the end of season two, I was a bigger fan of Alice than I was of the couple. If anything, I feel that's probably the most telling difference between Julia Schlaepfer's portrayals of high-school Alice and young-adult Alice. In the beginning, she's just another background player, tossed to the side whenever it suits Payton. By the end of season two, she's still holding onto a relationship that doesn't quite work but is beginning to look inside herself to find out what she wants from her life, not what Payton wants.

I've been obsessed with The Politician since the first episode, so it was my pleasure to speak with Schlaepfer about what drew her to the project, how she identifies with Alice, and what she wants people to take away from her portrayal. And, of course, it wouldn't be an interview about Alice if we didn't talk about her outfits! Keep reading to see exactly which one was Schlaepfer's favorite.

Related:
Unfortunately, We'll Likely Have to Wait a While For The Politician Season 3

POPSUGAR: What was it that drew you to The Politician?

Julia Schlaepfer: Ryan Murphy was always my dream person to work with. I think that he is such a visionary and he's always kind of ahead of the times and focused on what the world is talking about. He's very progressive in that way with his shows and his work. When I read the script and it was about these really smart, progressive young people, I was so excited because I felt like it was so relevant for our times. It also has this really amazing classic Ryan Murphy quirkiness to it. And the cast was just stellar from the get-go. So, I mean, it was just a dream project looking at it as a whole.

PS: When coming back for season two, how much closer did the cast get?

"Coming back to season two, we had this comfortability with each other that we could totally trust each other."

JS: We're all obsessed with each other and really good friends. We would spend an entire day on set and then be like, "Okay, what are we going for dinner?" We couldn't get enough of each other. It was also cool because during the first season most of us were newer to television work, so we would spend every day in fear a little bit that we were messing up which had us joking about that a lot. Coming back to season two, we had this comfortability with each other that we could totally trust each other. It was amazing to just be there with some of my best friends and get to do what I love.

Image Source: Netflix
PS: How much of yourself do you see in the Alice from season one, versus how she's grown as a person in season two?

JS: I definitely recognize a part of my high school self in Alice, especially in season one, because she's trying so hard to appear perfect to the outside world. I feel so much of her puts on this facade with the lower voice and her little outfits. I think that's something that a lot of us can relate to at some point in our life. When I was in high school, I felt this need to show up every day looking perfect, having my hair done, and doing my makeup to figure out who I was. I think that part of her is what really resonated with me.

"I think it's so important for women to be speaking up and using their voices, especially right now."

In season two, it was so awesome to see the growth that they wrote for her; for her to finally be able to come into her own, find her voice, and find that empowerment. It was all something that I didn't relate to initially because I was very shy growing up. I didn't like to speak up too much in class because I always thought that I didn't have anything worthwhile to say. So for me, that journey for her was really powerful. I think it's so important for women to be speaking up and using their voices, especially right now. It was awesome that Alice finally kind of got that moment, particularly at the end of season two.

Related:
The Politician Only Has 2 Musical Moments This Season, but They're Both Pretty Meaningful

PS: By the end of season two, Alice seems to have finally figured out what she wants from her relationship with Payton and her life. What's something you'd want to see in a season three?

JS: I hope that we get to watch her continue to blossom and grow as her own person. I totally agree I think we've seen her revolve around Payton for, definitely season one and most of season two. I think in the end she's come back to him but she's come back on her terms. I want to see her demand a lot more out of him as a partner in an equal relationship. If he doesn't deliver, then she can get out of there. I'm okay with that happening because I think it's a really important journey for her to know her worth outside of Payton.

PS: One of the other things I liked about season two is how Astrid (Lucy Boynton) and Alice bonded after they both became pregnant due to Payton and Alice bringing Astrid into their relationship. What would you like to see happen with this bond between Astrid and Alice in a season three?

"It's great in today's world to see women who come from very different places, who may not agree on everything, lifting each other up."

JS: I love their relationship and their support for one another. Lucy and I are really close friends, so we were so excited to shoot those scenes that we had together. We both would always joke about how fun would it be if they ran away to a cult and stayed there forever together. I think again, Alice's world has revolved around Payton and you don't see her with many other of the characters because she is there for him. I think having these two women who are very different people and who believe very different things, support each other is such an important thing. It's great in today's world to see women who come from very different places, who may not agree on everything, lifting each other up. So, I would love more Alice/Astrid shenanigans.

PS: Was it difficult to shoot the scenes in their commune? It seems so ridiculous seeing it play out on screen!

JS: It was honestly so fun. We went up to that farm for one day so it was kind of amazing because usually we're in such perfect prim and proper outfits, then suddenly we're wearing these like huge white sacks. We were just running around, cracking up all day long. It was honestly really hard to get takes with Lucy. Afterward, we were like, "Oh, I wish we had another day of this work." Because it was just so totally in the opposite direction of anything else we had ever done for the show. We had the time of our lives. It was amazing.

PS: Speaking of going from those prim and proper outfits to those very Midsommar-esque, white dresses — do you have a favorite outfit that you've worn as Alice?

JS: Oh, my gosh. Yes. I mean, it is so hard for me to choose but, that seafoam green jacket with the white Gucci tights that I wore in the Central Park scene with the top-knot pony-thing, was my favorite thing in the world. I loved that outfit. I could live in that outfit. They didn't want me to wear that, because they knew I would be outside and they didn't want me to get cold, but I was like, "No, we have to use this outfit here because it'll really be on display and everyone needs to see this coat."

PS: One last question, what is something that you would like people to take away from the show and Alice, as a person?

JS: I hope that people take her as an example of strength and see that your life doesn't have to revolve around one person. You can stand on your own and can be your own person. That your voice matters and not to let yourself be underestimated. As young people in the world right now, we're seeing this movement happen and I think it's really important that young people are speaking up and realize that they have a lot to say and that they should say it.

The Politician seasons one and two are currently streaming on Netflix.