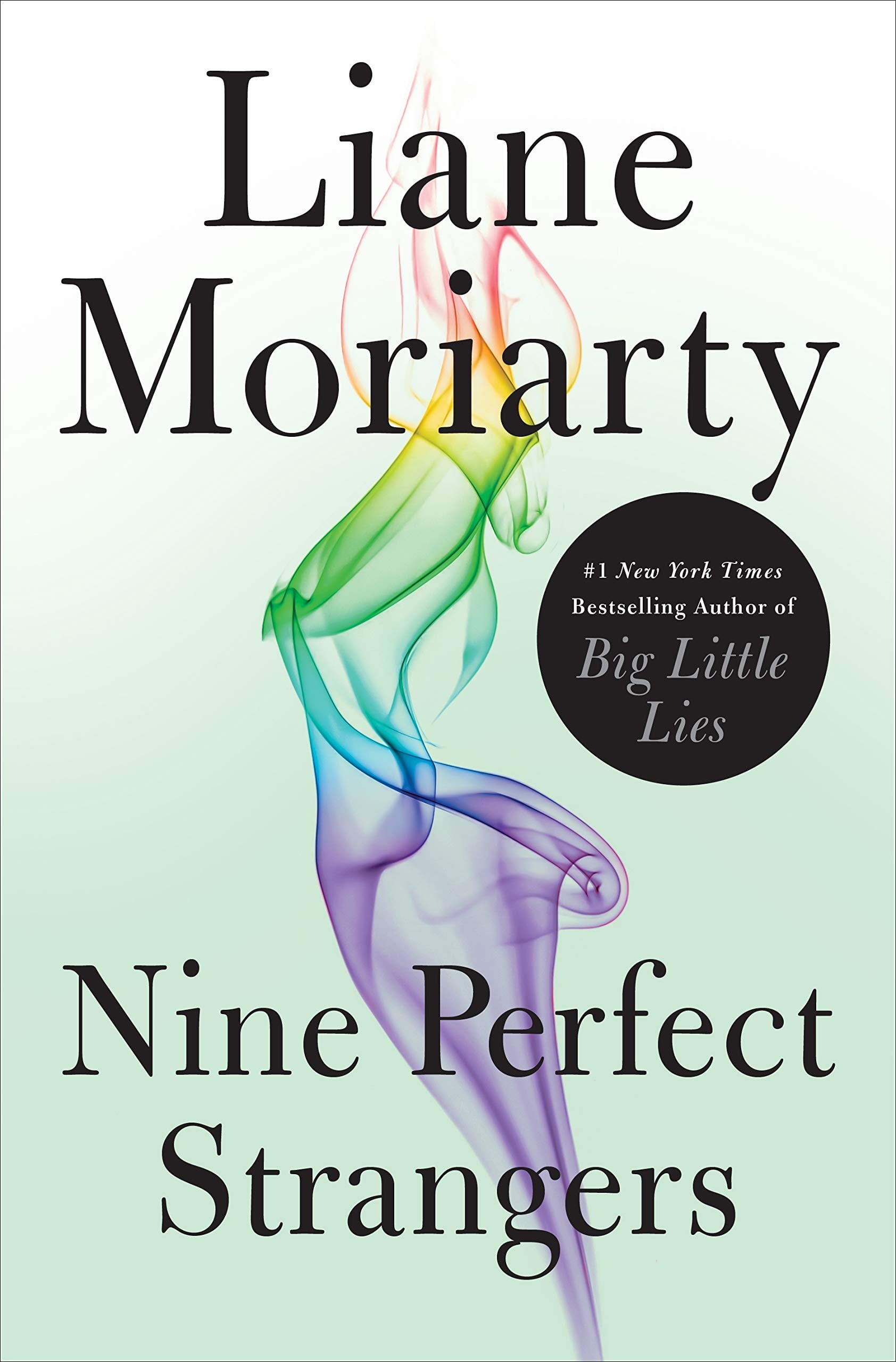 When Liane Moriarty writes a book, I'm the first in line to buy it. As the author of the wildly successful Big Little Lies — as well as a few of my other favorites like The Hypnotist's Love Story and What Alice Forgot — Moriarty is a master of delightfully relatable characters and page-turning suspense. That's why I'm so excited that her latest novel, Nine Perfect Strangers, is being adapted as a Hulu miniseries by David E. Kelly and Nicole Kidman. This novel is about a very unique health resort, led by Masha (played by Kidman) and featuring nine unsuspecting guests. The movie also stars Melissa McCarthy, Michael Shannon, Luke Evans, Bobby Cannavale, Regina Hall, and Samara Weaving.

If you are as excited as I am about this gripping new release, then take some time to read (or re-read) Nine Perfect Strangers. Although the adaption may be different from the upcoming miniseries, there could still be similar plot points. Here's a refresher of what happens in the book, below!

Nine Perfect Strangers starts from Yao's perspective. He is a trainee paramedic, treating an overweight corporate bigwig named Masha, who went through cardiac arrest and had to be rushed to the hospital. Fast-forward ten years later, and we're introduced to 52-year-old Frances Welty, a former bestselling romance novelist who is suffering from back pain, a terrible cold, and depression after finding out she was just conned from her fake internet boyfriend named Paul. She's on her way to a relaxing retreat at the "boutique health and wellness resort" called Tranquillum House. Frances signed up for the Ten-Day Mind and Body Total Transformation Retreat along with eight other guests.

Lars Lee is a 40-year-old divorce attorney and health retreat junkie who regularly attends these as part of a wellness routine. Ben and Jessica Chandler are a young couple who are always fighting and decided to go to the retreat to fix their marriage. Ben is obsessed with sports cars and Jessica is obsessed with her looks, and both of them have a hard time understanding each other after winning the lottery. Napoleon Marconi, his wife, Heather, and their daughter, Zoe, are a tall, beautiful family who are at the resort together to get through the anniversary of when Zoe's twin brother, Zach, died by suicide. Carmel Schneider is a 39-year-old divorced mother of young children with low self-esteem due to sharing her kids with her ex-husband and his new girlfriend. Tony Hogburn is a grumpy 56-year-old divorced man who doesn't talk to his kids much and is here for weight loss.

Also at the retreat is the therapist, Jan, the wellness consultants, Yao and Delilah, and the director, Marsha Dmitrichenko, who is now fit, healthy, and believes herself to have died and been born again after her cardiac arrest. She loves running the health retreat, but hates that clients keep coming back. She is deciding to try something new with this group, to help them find the healthy path forward with a new protocol.

From the very beginning, Tranquillum House seems a little weird to Frances. Her bags have been searched, with all her emergency wine and chocolate confiscated. She had blood taken as part of a comprehensive medical exam, and she is a little fearful about the upcoming five days of "noble silence" that all the guests must partake in to clear their thoughts. The guests all meet each other and Masha at their guided meditation, which is in a room with no windows or natural light that Frances describes to herself as a "dungeon on an isolated property with a group of strangers, at least one of whom was a serial killer." Although the last bit was definitely an exaggeration (the man was gruff and offered to help her in the midst of one of her hot flashes), it is a bit creepy. Masha lets the guests know that they will be different people when they leave, with unexpected changes and surprises along the way.

At mealtimes, each guest receives a different meal tailored to them, along with smoothies delivered to them throughout the day. The first night, the guests are woken up in the middle of the night for a starlight mediation, followed by a dawn tai chi class, walking meditations, exercise, remedial massage, more guided mediations, yoga, and free time. When the staff meet to discuss the next steps, Yao is willing to do anything Masha wants because he's secretly in love with her, whereas Delilah is a little more worried about it.

When the silence ends on the fifth day, the guests finally introduce themselves. They recognize Tony as a former athlete, and Zoe reveals that her brother hanged himself. Then, Heather realizes something is not quite right and asks Masha if she's been medicating them. Masha admits that she's been "microdosing" her guests with a tenth of a normal dose of LSD in order to heighten their creativity, focus, and spiritual awareness and lower their inhibitions. But the last smoothie she gave the guests had both a dosage of LSD and a liquid form of psilocybin, known as "magic mushrooms," and she gave Ben and Jessica ecstasy. The guests are about to embark on the next stage of the experience, which they've never done before, called psychedelic therapy.

Everyone's thoughts are getting jumbled and confused, and the wellness consultants are directing the guests to lie down and put on headphones with classical music. The guests seem to be having a breakthrough, with Zoe and Heather admitting that they felt responsible for Zach's death, Ben and Jessica kissing, and Carmel starting to appreciate her own body image. But nothing is as Masha planned when things start to take a turn. Jessica reveals she's pregnant, Napoleon is full of rage with his family's secrets, and all the guests wake up to discover they've been locked in the meditation studio.

After the guests had been fasting and locked in the room for 48 hours, Delilah decides to grab her stuff and leave. She feels weird about drugging the guests and knows that any "breakthroughs" are manufactured and not real, so she takes Ben's Lamborghini and escapes. Meanwhile, Masha and Yao are getting increasingly frustrated that the guests are not having a transformative experience like they themselves did when they tested this therapy. They also haven't solved the puzzle that will allow them to escape.

When Frances thinks about looking up, they discover a hidden package in the rafters. Inside is a Russian doll, but the last doll is missing. From Masha's office where they are watching the guests, Yao is confused why the last doll with the code isn't there. The guests are supposed to discover it, escape, and be treated to a feast where they can all share their experiences. But instead, Masha had an epiphany and decided that she wants the guests to surrender and accept that there is no solution to their situation. She believes that terrifying them is the only way to help them, and she creates a "dark night of the soul" that they must go through in order to be reborn.

Dark Night of the Soul

The lights are suddenly turned out, and everyone gets scared when Masha greets them on a large video screen. Yao is slumped over not moving on Masha's desk, and she tells everyone that Delilah has left — so the nine guests are alone with Masha. She tells them that they are going to play a game called Death Sentence, where they have to pretend they are sentenced to death on Death Row and they have a chance at clemency and have to argue for their lives. She then gives each guest a lawyer who will defend them to Masha.

Back in her office, Masha is reflecting on her past, and her 11-month-old baby who died many years ago in his crib and the pain it still causes her. She is hurting and not herself, since she also took LSD. She is feeling crazy and having a hard time differentiating reality from her trip with no one to watch over her, since Yao is sedated. She takes out a cigarette lighter and is playing with it while listening to the guests fighting for their lives. Right before the video screen goes black, she asks them if they can smell the smoke.

The guests start gathering towels to wet as they prepare for a fire that will soon engulf them. They are panicking as they hear the fire above them. As they huddle in the corner together, they realize something strange: the fire-cackling sounds keep repeating. It sounds like it's just a recording — there's no real fire after all! Frances decides to try the door again and it opens; it's been unlocked and they are free.

There is no fire, so all nine guests simply walk out the door and up the stairs. Yao approaches them with a huge platter of fruit and lets them know they have breakfast prepared. Everyone is confused, why is he acting so normal? Then Masha appears, and Heather starts threatening her, so she attacks her with a letter opener. Napoleon leaps in front of her and Frances drops a candelabra on Masha's head to stop her. A policeman shows up — it is Jan the therapist's boyfriend. She called him because she had weird suspicions about Tranquillum House after the rest of the staff had been asked to leave in the middle of the retreat. More policemen show up and discover illegal drugs on the premises. An ambulance takes Masha to the hospital. Because it's late, the guests spend another night, where they host an impromptu party for Zoe with cake and pizza and wine.

Later, Jessica discovers she isn't pregnant, and she and Ben get an amicable divorce. Carmel realized that she doesn't actually miss her ex-husband and does get along with his new girlfriend, who works out a co-parenting plan with her to help with the kids, offering Carmel some relief. Lars decided to go through with having a baby with his long-time partner, Ray. Frances starts writing again and decides to try out a relationship with Tony. Zoe and Heather seem more at peace, and Napoleon has been seeing a psychiatrist to help him work through his depression. After spending 14 months in prison, Yao is now happier with his own 2-year-old daughter. Masha achieved fame after writing a book about her experience and is now running tailored programs in secret. Finally, Frances and Tony get married, and Frances's latest book is a success, giving her the happy ending she deserves.

Hulu
"The Bear" Star Ayo Edebiri on Cooking, Grief, and Chopping All Those Onions
by Victoria Edel 1 week ago