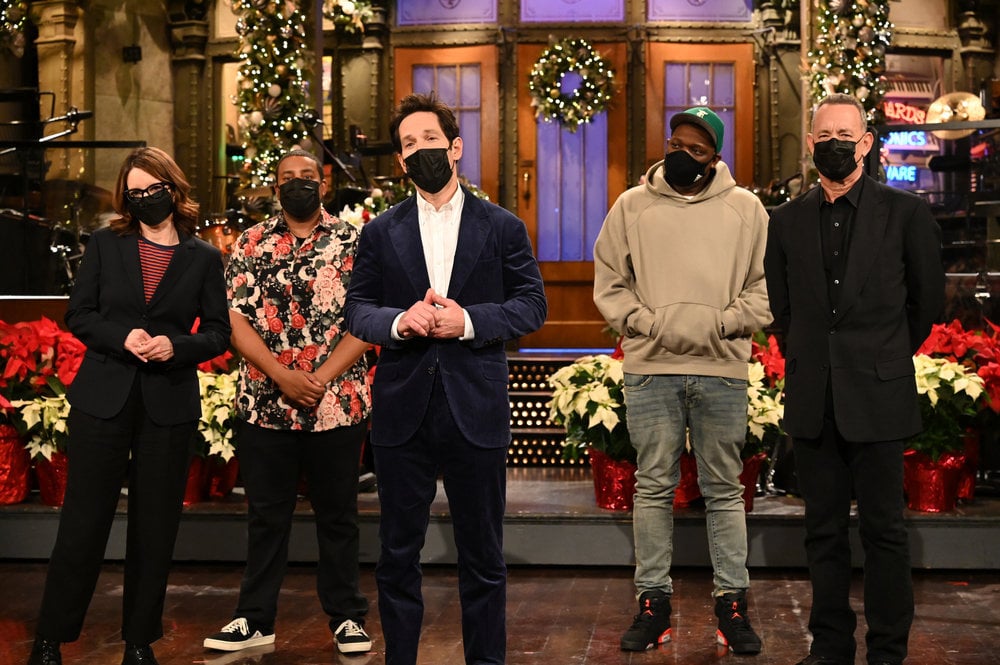 Live television shows no mercy. Whereas scripted series benefit from being able to stop and start production around inconveniences, live television is a roaring freight train without a final destination. And as the global population approaches its third year of the pandemic, the entertainment industry has gotten savvier at mitigating risk and establishing protocol, but amid breakthrough infections and surges, setbacks still happen. When do real-world curveballs take the fun out of spontaneity?

As it prepares to resume its 47th season following an annual holiday hiatus, Saturday Night Live is scrambling again. Roddy Ricch was scheduled to perform on the upcoming Jan. 15 episode, with Ariana DeBose hosting, but days before, the rapper had to pull out due to a COVID-19 exposure on his team. "I'm working with the SNL team to lock in a new date," the rapper wrote on his Instagram Stories. Bleachers was quickly announced as the replacement.

The news is the latest in a series of last-minute cancellations and replacements. At the start of the pandemic, the variety show went into lockdown after the Daniel Craig-hosted episode on March 7, 2020. The 45th season wrapped up with three episodes filmed remotely, resulting in an earnest yet ultimately saddening attempt: Saturday Night Live at Home.

The following 46th season brought cast members back to Studio 8H with quarantine protocol, regular rapid testing, smaller staff meetings, and masked audience members. Despite a smooth premiere, the second episode was reconfigured when musical guest Morgan Wallen was seen partying at a crowded bar a week before his scheduled performance on the Oct. 10, 2020, episode hosted by Bill Burr.

The country singer was pulled for violating protocol, but following an apology tour, Wallen was invited back soon after for Jason Bateman's episode, which included a sketch poking fun at the controversy. "My actions this past weekend were pretty shortsighted and they've obviously affected my long-term goal and my dreams," Wallen wrote after the initial firing. "I have some growing up to do." A few months later, TMZ released a video of Wallen yelling the n-word at friends.

There have also been smaller stressors, like when, earlier this season, Ed Sheeran announced he had tested positive for COVID-19 two weeks before his performance on the Nov. 6, 2021, episode hosted by Kieran Culkin. Despite having "really, really, really bad symptoms," Sheeran was cleared to perform in time. He later told Howard Stern that he hadn't feared his appearance was in jeopardy. "Everyone was saying they were scrambling to find a replacement," Sheeran said. "I was always playing that."

Related:
For COVID Long Haulers, It Can Feel Like the Pandemic Will Never End

Then, as cases surged due to the more contagious Omicron variant, the Dec. 18, 2021, episode faced major rewrites. Host Paul Rudd delivered his monologue in person, but the majority of the episode consisted of prerecorded and vintage sketches. Michael Che and Kenan Thompson were the only two cast members on set and there was no live audience. Charli XCX's musical performance was also canceled. "I am devastated and heartbroken," she wrote. "It can't happen this time, but I'll be back! I am verdantly safe and healthy but of course very sad."

As it's unclear how or when the pandemic will reach a manageable state, it's understandable that industries would want to adapt and move forward. We've seen this play out on the global stage, like with the 2020 Summer Olympics that ended up taking place in 2021, and on a much more intimate scale: the postponed wedding, the delayed first year of preschool, the career move that didn't quite feel like the right time. But does that same heartbreak need to be replicated weekly by a major television network?

Lorne Michaels thinks the laughter is worth it. "It's difficult, but we've done difficult a lot of times. Comedy, when there's a little danger involved, it doesn't necessarily suffer," the SNL creator and executive producer told The New York Times in 2020. "Obviously, I take my responsibility for people's health and lives very seriously. But we did a show with anthrax in the building. We did a show after 9/11. That's what we've always done. To our audience, it's really important we show up."