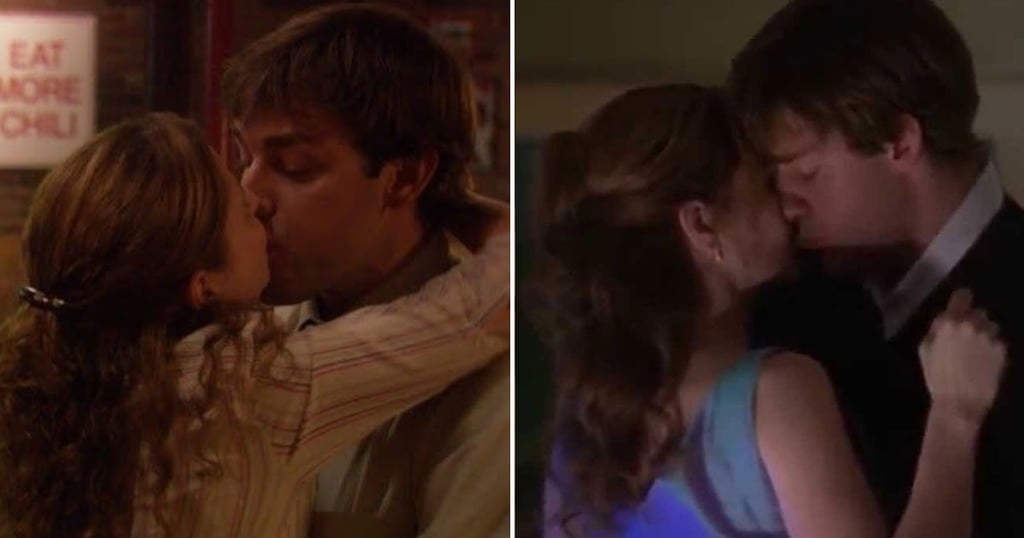 No One Can Decide When Jim and Pam First Kissed on The Office, and I'm Going Crazy

There are two very important moments for Jim and Pam shippers that come up early on in The Office: season two's premiere, when Pam kisses Jim in the heat of the moment while heavily intoxicated at the Dundies; and in the season two finale, when Jim can't take it anymore and kisses Pam after confessing his true feelings for her. Both of these kisses happen while Pam is engaged to Roy, and until today, I didn't realize how both of these kisses are equally controversial among fans of the beloved NBC sitcom.

On Thursday, The Office's official Twitter account posted a "fun fact" for viewers: "@johnkrasinski's first on-screen kiss was with @jennafischer during Casino Night (2006)." The tweet references the "Casino Night" episode of the show, when Dunder Mifflin hosts a Casino-themed fundraiser and Jim takes the aforementioned opportunity to tell Pam that he loves her. But what about that kiss in Chili's?!

To quote Oprah, what is the truth, NBC? Jenna Fischer, who plays Pam, luckily swooped in and tweeted, "Or was it Dundies?? Discuss!" I am discussing, Jenna! And I'm still confused! Does Jim and Pam's kiss during the Dundies not count because it was more of an excited friendly gesture? God was in that Chili's that night! It should count!

But then again, Jim's kiss with Pam in "Casino Night" remains one of the most romantic — if not the most romantic — moments throughout the entire series. Perhaps that's the level of dedication that it takes for John Krasinski to consider it his official "first" onscreen kiss? Either way, things eventually got so heated that The Office's Twitter account posed a new question: "When was Jim and Pam's first true on-screen kiss?"

Let's compare the evidence ahead.

Related:
The Science Behind Why You Love Watching the Same Shows Over and Over Again
Previous Next Start Slideshow
John KrasinskiThe OfficeTVTwitter Reactions