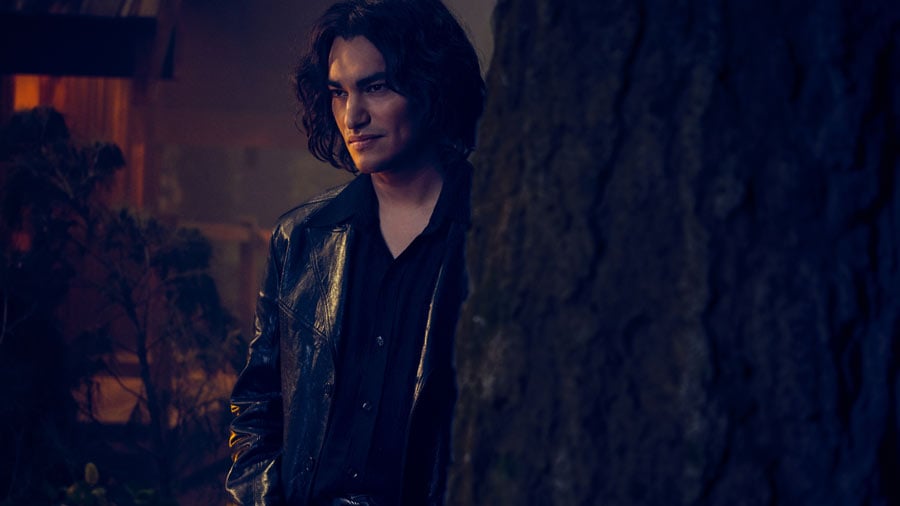 On the premiere of American Horror Story: 1984, the show incorporated a real-life serial killer into the action, which is something the show has done in the past. Before we dive into this creepy character, be warned: Spoilers for the premiere episode and for the actual details of the man known as "The Night Stalker" are ahead.

In "Camp Redwood," one of the big reasons the main characters leave Los Angeles for the Summer to go work at a camp is because "The Night Stalker" just killed someone in the Glassell Park neighborhood. Xavier (Cody Fern) talks about how 79-year-old Jennie Vincow was found with her throat slashed so deeply that she was almost decapitated. Then later that night, Brooke (Emma Roberts) is attacked in her home by Richard Ramirez, who would go on to be known as "The Night Stalker" in the press.

This real-life serial killer terrorized LA and San Francisco from June 1984 to August 1985, killing what was thought to be 13 victims during his spree (it was later upped to 14 after DNA evidence linked him to an April 1984 crime in 2009). Interestingly, however, after Vincow's murder in June 1984, Ramirez didn't commit another murder (that authorities are aware of) until March 1985. He wasn't dubbed "The Night Stalker" until the spree started in earnest that Spring. That's a bit of a mistake on the part of AHS — Ramirez wouldn't have been known as "The Night Stalker" in the Summer of 1984.

Related:
Will Sarah Paulson Reprise a Fan-Favorite Role in AHS: 1984? This Theory Is Convincing

But what it seems like the show is attempting to do is explain what Ramirez was up to in that huge gap between the June 1984 murder and the Spring 1985 killing spree. In this universe, he was two hours away, possibly killing a bunch of counselors at Camp Redwood because we saw him in the waning moments of the premiere episode, watching Brooke from the woods.

It sort of fits with his whole Satanist thing; Ramirez was an avowed Satanist and Margaret Booth (Leslie Grossman), the owner of the camp, is a born-again Christian after surviving Mr. Jingles's (John Carroll Lynch) killing spree in 1970. So perhaps as Ramirez stalks Brooke at the camp, he'll decide anyone associated with the Christian camp needs to die.

Interestingly, when Ramirez attacked Brooke on the show, he asked her for her jewelry. That's not out of character — the Night Stalker did rob his victims sometimes. But Brooke was seen earlier looking longingly at what appeared to be an engagement ring. Was she once engaged and is that man now dead? How does that fit into the AHS narrative this season? Does it have anything to do with Ramirez and why he targeted her?

Guess we'll have to wait and see.