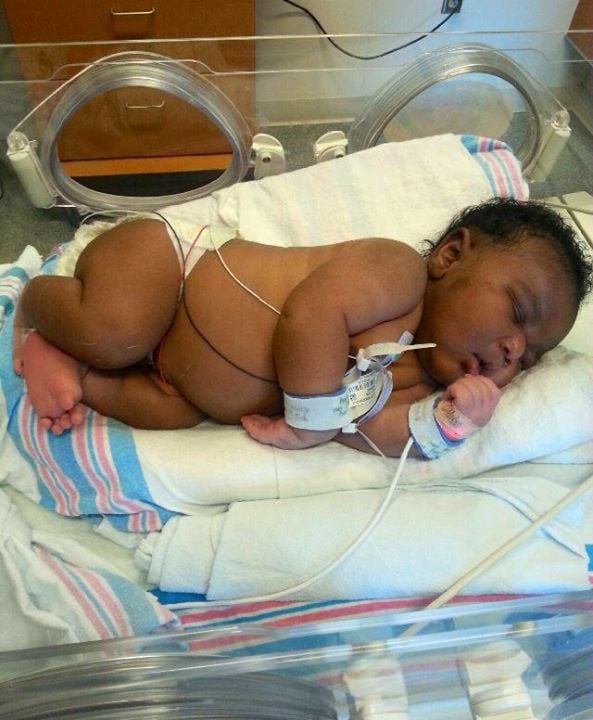 Not knowing she was pregnant until her third trimester wasn't the biggest surprise of Maxxzandra Ford's pregnancy. Giving birth to a 14.1-pound baby proved to be even more shocking. Ford, who is a nurse, says her "feet never swelled, never was really that tired, my back didn't hurt so obviously I didn't think anything of it." Already the mom of a 1-year-old son and 5-year-old daughter, she assumed she knew the telltale pregnancy signs, but when she began gaining weight last Fall, she went to the doctor to see if she was pregnant with twins (Ford is a twin herself), only to discover she was 35 weeks pregnant with one baby.

Fast-forward to Jan. 29, and Ford found herself in labor at St. Joseph's Children's Hospital of Tampa. "I was cussing up a storm," Ford told WFLA. "When I felt his head come out, I knew he was bigger than 10 pounds," she said at a press conference. That turned out to be quite an understatement.

Though doctors typically choose a C-section for unusually large babies, once the head was delivered and they determined this baby would be much larger than 10 pounds, it was too late to change course. Twenty minutes later — after 18 hours of labor — Avery Ford (all 14.1 pounds of him) was delivered, making him the largest baby born in the hospital's 30-year history. And while Avery certainly weighs in at a hefty size, last year, a California baby was born weighing 16 pounds, 1.7 ounces!

Avery has been spending time in the hospital's neonatal intensive care unit due to some breathing issues but is expected to join his brother and sister at home soon.

Whoa baby! Tipping the scales at 14.1 pounds, Avery is the largest baby born at St. Joseph's. Even more amazing, mom...