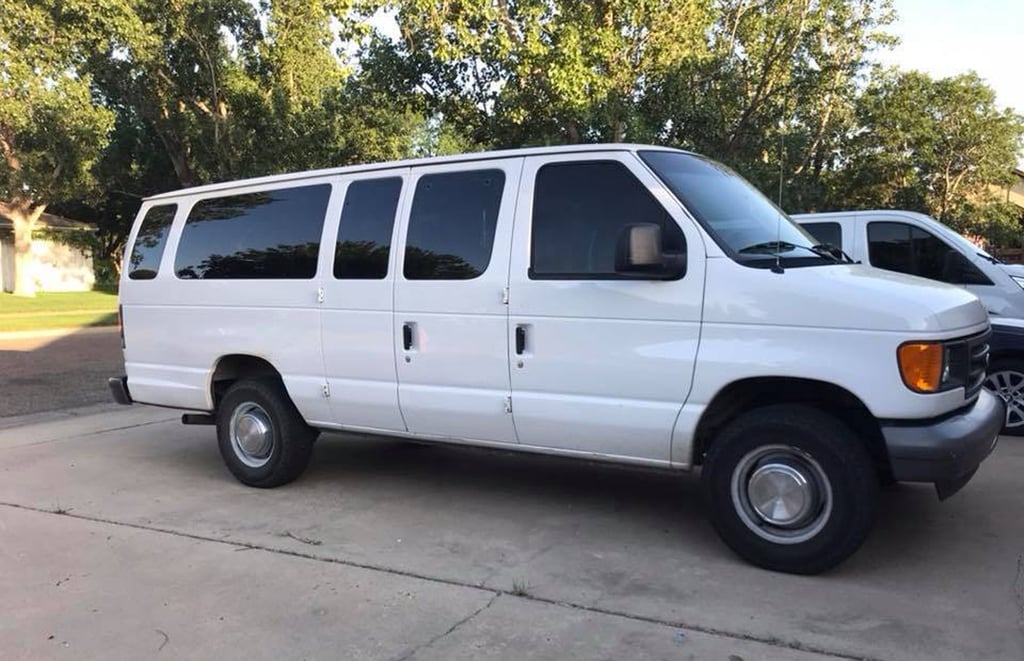 A dad of nine from Texas is going viral for a candid Craigslist post about his family's 15-passenger van that is so funny, we're rolling like a parked car left in drive. The ad states that the 2005 Ford E350 XL going for $3,800 is in fair condition, has 143,200 miles on it, and is currently clean, but it's what the dad had to say about the adventures the family has had in the van — "in the interest of full disclosure" — that makes the ad truly hysterical.

"The van is missing a speaker in the side door. My kids have been throwing random items in the speaker hole for years. So, you may end up with some very special treasures. Or really old chicken nuggets. Probably both," the dad wrote. "We're a family of 11. Every one of our children has thrown up in this van at some point in the past decade . . . We have had the van detailed a couple times since then (shout out to Xtreme Auto Re-Styling Center for tackling a level of depravity unrivaled in the world of passenger transport). The van is clean now; but, it will probably always be inhabited by the ghost of vomit past."

Related:
This Dad's Texts After His Kid Puked in the Car Will Make Your Day

He continues to cheekily outline the various issues the van has — like its sometimes lack of AC — following up with a FAQ section anticipating the questions he expected potential buyers would ask.

Q: "Have you performed all proper maintenance and religiously changed the oil every 3,000 miles?"
A: [laughter] No. No, I have not. Does this article make you feel better? It made me feel better.

Q: "Are those 143,000 miles mostly highway miles?"
A: Well, a lot of them are. However, we've been using this van as our farm van for the past year or so. Also, in efforts to find quicker routes, I've been known to disobey Siri's directions. These "shortcuts" have sometimes taken us on exotic, off-road adventures. I'm pretty sure those miles cancel out all of the so-called "highway miles."

Q: "Is the registration current?"
A: Yes! It should be noted, however, that first three letters of the current license plate are FRT. We have five boys under the age of 12 in our house. This is a very unfortunate combination.

Related:
Friends Put Out an Ad For a "BBQ Dad" to Man the Grill at Their Party, and Craigslist Delivered

The dad's ad is so good that it's likely the van is already sold according to an update made on July 30. "My goodness, world. Wow. Thanks so much for all of the interest! I've loved reading your many emails, responses, and commiserations," he wrote. "Solidarity, fellow parents and vomit van drivers. I do think the van is sold (surprising me and likely all of you) . . . Believe it or not, I have a waiting list to contact should the deal fall through. Amazing. My apologies if I don't respond to your inquiries in a timely manner. Again, thank you for all the wonderful responses. It's nice to know that we're not alone in our smelly, intermittently cooled world."

Check out some photos of the now-famous van, as well as more of the dad's comments about it ahead!

Related:
Dad Had Diarrhea in Public Restroom With His 4-Year-Old — and Her Response Is Giving Us So Much Glee
0
previous images
-21
more images
Previous Next Start Slideshow
FatherhoodParenting HumorCraigslistHumor
Around The Web

Little Kids
If This Video of a Toddler Trying to Put On Her Pants Isn't All of Us While Social Distancing, What Is?
by Murphy Moroney 1 day ago

Grandparents
A Grandma Made Social-Distancing-Themed Barbies, and Her Attention to Detail Is Incredible
by Murphy Moroney 1 day ago

James Corden
Staying Home With 3 Kids, James Corden Says, "It's Hard to Know Who's Being Homeschooled"
by Kelsey Garcia 20 hours ago

Viral Videos
Having a Bad Day? This Video of an 80-Year-Old Man Dancing After Getting Toilet Paper Will Cheer You Up!
by Murphy Moroney 21 hours ago