In I Feel Pretty, Amy Schumer plays a woman who can't get over the fact that she's not — in her own eyes — beautiful. There's a scene where she's trying to get the attention of a bartender, and he just doesn't see her. Her looks haunt her — in a world obsessed with beautiful people (Met Gala, anyone? Beyoncé at Coachella?) — she feels invisible.

I can relate. For most of my life, I've felt that way, too. Or worse, I felt seen and judged as wrong. Not tall enough. Not small enough. Not thin enough. Not pretty enough. Too big in most places. Never dressed the right way.

I have a million stories of the little slings and arrows that contributed to my insecurity. Being a kid who never lost my baby fat. Sucking in my stomach for decades. Hiding as I changed in gym class. Crying in dressing rooms when clothes didn't fit right — or at all — in the biggest size the store had.

Related:
I Know It Sounds Awful, but I Really Struggle to Teach My Daughter Body Positivity

Nothing felt right about me. Not a damn thing, and I didn't get a lot of help from the world in changing that assumption. Television, movies, and magazines showed only beautiful women. Fat people were, with few exceptions, only there to make jokes. Ugly people weren't seen . . . especially ugly women.

My mom was too beautiful to understand my insecurities when I was a kid. I didn't have the words to tell my handsome dad. My sister was beautiful, too, with the same red hair as our mother, both of them so often praised and complimented for being a redhead that I hated red hair, my own being utterly boring brown. My brother was quick to point out my physical flaws and mock me for them — I was too fat, my glasses were so thick, I was physically awkward, which seemed to disgust him.

I didn't date until I was 19 years old, and it was so hard pretending to be confident after spending an hour trying to hide the breakout on my chin or fluff up my flat hair.

Dating didn't make me feel different about myself. In fact, it made me feel worse, since my dating history consisted of three very good-looking guys. What is he doing with her? I imagined people wondering. I wondered it myself. He could do better.

Related:
This Mom Is Proud That Her "Perfect Body" Went to Her 2 Beautiful Kids

Then came the guy I'd marry. By then, I was exhausted from trying to be more than I was — funnier, more interesting, better looking, more ambitious. My last relationship had worn me down to a nub. He was the boyfriend who told me I should lose weight . . . and I did because he was a perfect physical specimen, and so I should at least try, right? (Wrong. I should've dumped him, but it would take me years and years to believe that.)

I remember when I met the guy who'd become my husband. I thought, "I'm done trying. He likes me or he doesn't, but I'm not turning myself inside out for someone ever again."

And he did like me, then he loved me. He thought I was beautiful. He really believed it. Once, when we were at a wedding, he looked around and said rather smugly, "You're the most beautiful woman in the room."

I wasn't. Even his love and sincerity didn't trick me. It was a relief, though, being with a guy who didn't need me to be more than I was. If I had a whopping huge pimple, it was OK that he knew it. If my period was nasty, I could tell him. It sounds so dumb, and yet it was the first time I'd been in a relationship where I'd given myself permission for that kind of honesty.

And yet, it was still there, my lurking insecurity, my horror at him walking into the bathroom when I was shaving my legs and didn't have time to suck in my stomach or arrange myself more attractively. He might have thought I was beautiful, but I didn't. I had eyes, didn't I? I knew beautiful, and it wasn't the person I saw in the mirror.

Forget being pretty. I failed at motherhood, and it was all I ever wanted. I hated my physical self more than I could ever put into words.

Then came pregnancy. I was so happy . . . until I miscarried the day after I told my entire family I was pregnant. It was normal, the doctor said. Sad, but common. I got pregnant again, and waited and waited for the 18-week ultrasound, which revealed a baby with an incomplete heart and brain, a baby who would not make it to term, they said. They were right. At 20 weeks, I gave birth to a baby who would never draw breath.

My stupid, stupid body, failing me yet again . . . but this time on the most primal, essential level there was. My sole biological purpose was to procreate. My grandmother had had nine children. Nine! My mother — three kids in four years. I was supposed to excel at this, being a strapping farm worker in size. Wide hips, big boobs, born to breed. Except I couldn't, and I desperately wanted to. I was a failure. Forget being pretty. I failed at motherhood, and it was all I ever wanted. I hated my physical self more than I could ever put into words.

My third pregnancy was fraught with terror. I trusted nothing. I waited for doom. At any given day of those 41 weeks, I could've told you how many days it had been since conception.

Eight days after my due date, I gave birth to a healthy daughter. What I remember from my labor was a sense of awe. My body was doing things I never knew it could. I got to the hospital at 10 in the morning, and by lunchtime, I was a mother. I was a goddamn superhero. 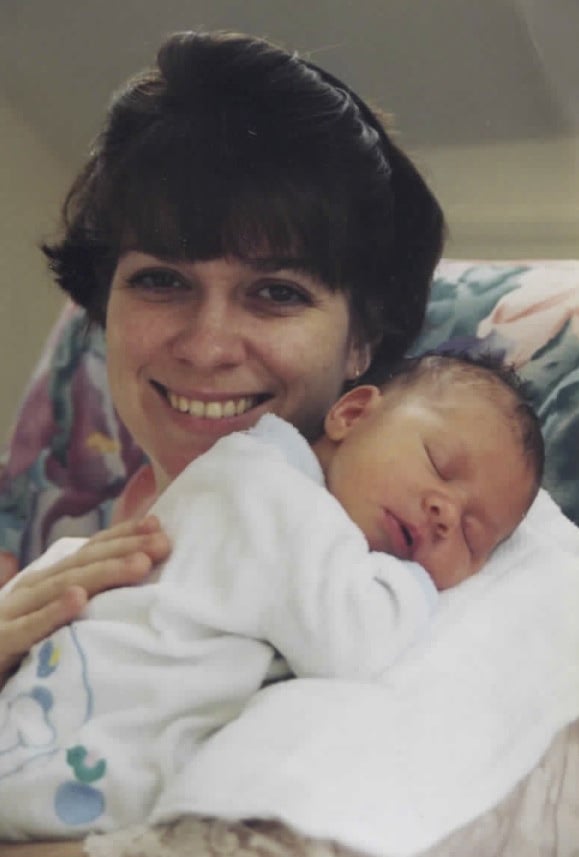 When I held my daughter, I knew I had to be better for her than I'd ever been before. Stronger, braver, more honest, kinder. And not just toward my baby, but toward the world . . . and toward myself.

That was when things turned. When I could nurse her, rock her, stay awake for 20 hours soothing her, I was amazed at my physical abilities. When I could carry her on my shoulders and push her on the swing, I liked my strength, my size, my brawny shoulders. When she cuddled against me and declared me "comfy," I liked my soft stomach. When I had to role-model confidence and positivity so my daughter would have those qualities, too, I did my flat-out best. And when she looked at me and said, "You're so pretty, Mommy," I knew that I was.

When she looked at me and said, "You're so pretty, Mommy," I knew that I was.

I've come to like my looks. I think I have a kind face. A ready smile and eyes that hearken back to my Hungarian ancestors. I've accepted my size, which continues to evolve and change as I get older. I'm mostly healthy these days. I try to embrace the gentle humiliations of aging, because I've lost too many friends to dismiss the gift of these 53 years.

In my upcoming book, Good Luck With That, two best friends struggle to get to a place of self-acceptance without changing a thing about their physical selves. There's no magical thinking, as there is in I Feel Pretty, no magical concussion. But they get there, step by step, confronting the same things most of us have to, unpacking their issues, together, best friends through it all.

In Amy Schumer's movie, Renee walks across the lobby of a Manhattan skyscraper, confident that she's the most beautiful woman in the world. When I walk across a lobby (or a grocery store), I'm confident now, too — not out of the conviction of my beauty, but the knowledge that I'm enough. That I have much to offer. That I'm the mother of two fine people, the wife of a good man, a woman who made a surprisingly successful career for herself, a person who will always help if she can, and with a smile at that.

I look just fine. In fact, I look damn good.

Kristan Higgins is a New York Times bestselling author of nearly 20 novels. Her latest, Good Luck With That, is available Aug. 7, 2018.

Pregnancy
Constance Wu on Returning to Work After First Child: "It Was the Hardest Day"
by Sara Youngblood Gregory 1 week ago