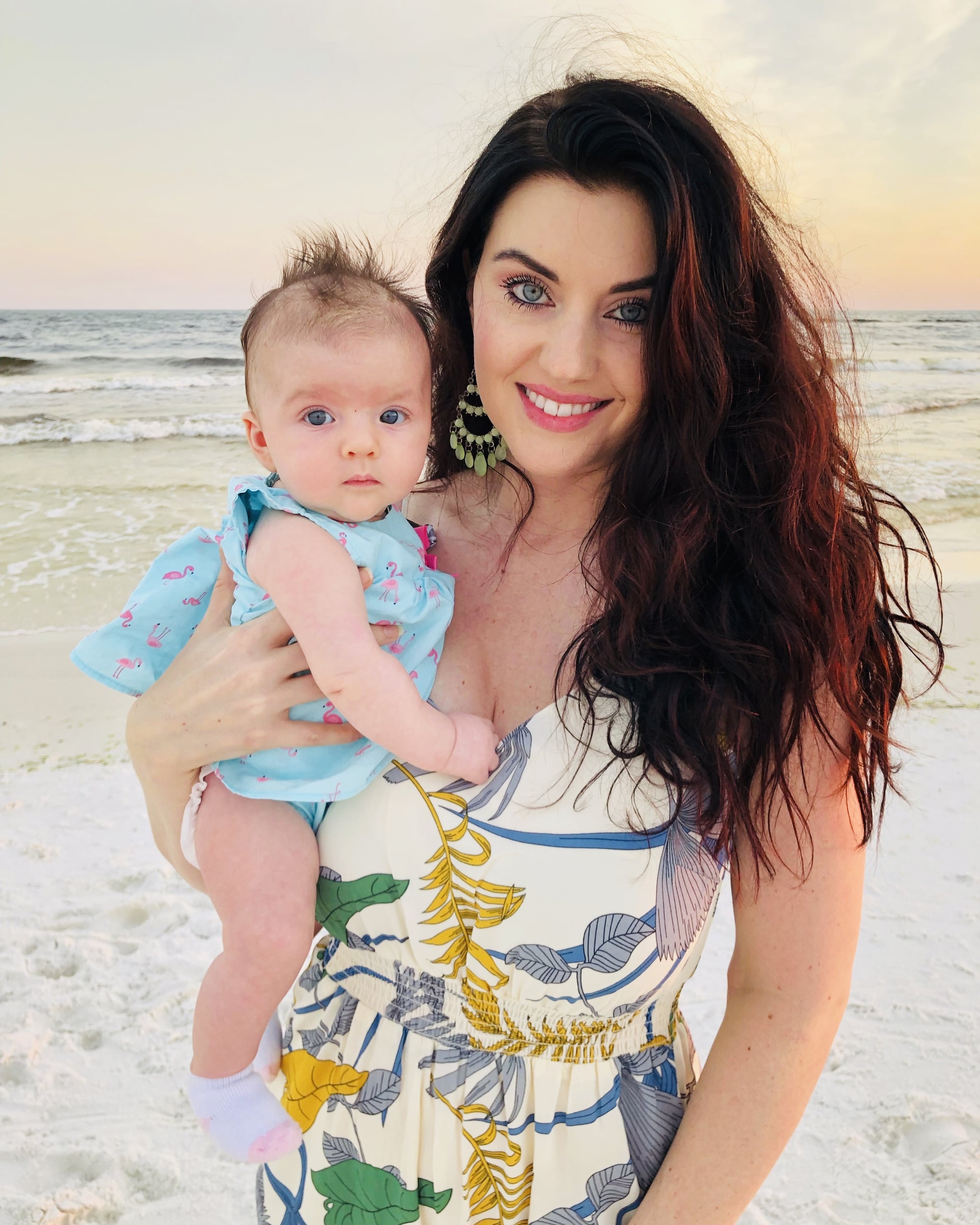 I stood in my closet, sliding my hands across my favorite dresses and jumpsuits all hanging in an enticing row. Each served as an emblem of an occasion or a season that had shaped some aspect of my life. Some of them conjured up happy memories and others bad, but regardless, they were all mine to call upon. Yet, in that moment, they felt like remnants from a distant lifetime. Six weeks prior, I had given birth to my first child, a daughter, and aside from being forced to function on love instead of sleep, and navigating the obstacle course that is trying to leave the house with a newborn, my postpartum body was still too swollen to slide into the majority of them.

There was the striped backless jumpsuit that reminded me of an indulgent dinner with my husband a year prior, worn while soaking up a sunset view from a rooftop patio in West Hollywood. I could still taste the glass of Rosé and the ceviche I had dined on that night. There was the floral blue crop top I had worn to the Halsey concert mere hours after discovering I was pregnant. I closed my eyes and could still feel the percussive thump of her pop ballads filling the venue, and the energy of the other sweaty, swaying bodies that surrounded me. There were the pants and jacket I'd worn during one of my most exhilarating, knee-knocking career milestones. I paused to thumb through each of them with longing. And then it hit me, one of my deepest fears: I wasn't that person anymore; that person was gone.

The woman I had fought so hard to become — who was ambitious and confident and free-spirited and unafraid to be seen, who had wrestled into silence the constant hiss of the tragic loss of her own mother, who had triumphed over the dysfunctional patterns of abusive relationships, who had honed her craft despite a long stretch of failures — she was nowhere to be felt or found. She was painfully absent — merely a ghost who haunted those walls.

I glanced around at totems of the life that I had built, grieving the loss of myself the way one would mourn a friend who vanished without warning or apology. It was as though the old me had escaped through the hospital room window the moment my baby entered the world, fleeing the scene into obscurity. I ached for a glimpse of her, wondering if she'd ever be coming back. I could hear my daughter crying from downstairs as my husband tried to soothe her. Now that she had safely arrived, I was drunk with a devoutness of gratitude. I was so enamored and mesmerized by her that the smell of her skin made me cry. I often buried my face into her buttery neck and wept with awe and thankfulness. But, now that she was here, who was I?

I realized that the rest of the world raced forward with their funny email exchanges, and office banter, and sun-drenched weekend plans.

It hadn't always felt this disorienting. Upon returning home from the hospital, I spent the first couple of weeks on a high. I was awed by her every breath and coo — romanticizing even the most exhaustive moments. Every night, I'd sit in the silence as the birds began to chirp while she lay swaddled in my arms. Around 5 a.m., I'd move into the kitchen and fill the coffee pot, covering my swollen body with my milk-stained bathrobe while gazing out at the street lights. I was depleted, yet immersed in the greatest, most rapturous love story of my life. But once the adrenaline abandoned me and the sleep deprivation triumphed, and I realized that the rest of the world raced forward with their funny email exchanges, and office banter, and sun-drenched weekend plans, I began to feel like I was existing in an alternate universe, identifiable only as Mommy. As though I had been reduced to an unrecognizable granule of myself.

Was I ever going to feel sexy again? Would I ever again read a book that wasn't a sleep-training manual? Could I still write? Could I still be introspective about something other than the state of my shrinking uterus? Those are the things I began to ponder while nursing my precious baby in the dark hours of the night.

Related:
I May Be a Mom — but I'm Also So Much More

As the weeks turned to months, my husband and I decided to hire a nanny two days a week so that I could slowly ease back into my career life. The first few days felt so awfully discomforting, I sat at my desk in my home office, staring blankly at my computer screen while sobbing intermittently. I felt guilty for not being at my baby's side every moment. My heart ached to race down the stairs, scoop her up and return to her care, yet it also ached to return to being me — the one who was accomplished and passionate and outspoken.

"If you completely live for your child, you will lose yourself. And that would be a shame, because I think the world needs more women like you."

One day, while exchanging a string of voice messages with one of my best friends — an older, wiser, more experienced mother — I lamented the complexities of new motherhood, telling her I was choking on the conflict of balancing my new and most honorable role with other roles I had long cherished. She responded with a firm yet loving lecture, saying, "I promise you one thing: if you completely live for your child, you will lose yourself. And that would be a shame, because I think the world needs more women like you. And, really, when you think about it, that baby needs you to stay firm and strong in who you are as an individual so that one day you can show her how to become one."

Those words fell over me like an avalanche of cold, inarguable truth. It was such obvious and simple advice, yes, but so earth-shattering to my vulnerable state of transition. It was something I had known and sworn in my pregnancy that I would always remember, but it was a promise that looked far different on the other side of my new life — one abundant with mom guilt. I needed that wake-up call like I needed air and water.

I had created a new and fragile life that I was now responsible for, but that didn't mean I was dead. It just meant that I had been reborn. Motherhood did not mean I had to lose my individuality, nor allow my dreams to become an old, abandoned house that would eventually give way to ruin. It wasn't essential for my daughter to be my sole purpose and motivation for living in order to give her the best care and love possible. Quite the opposite was true, in fact.

Before I became a mother, when I was working on a project or through a problem, I always knew a break was on the horizon. But that is not true with motherhood. Every day is a lifetime filled with moments drenched in servitude. There is oftentimes no self to be found, and some hours feel like moving through mud. Even when you hire a babysitter or summon a family member to give you a breather, your child's safety and well-being are continuously projected onto the backdrop of your every thought. There is no respite away from the noise of such primal responsibility. This is why I have found that it is essential for me to fight to maintain my sense of self, filling any moment I can spare with the fragrance of who I uniquely am. I've learned it has to be a conscious, daily decision.

I believe that holding onto my individuality is the most powerful gift I can give my daughter.

I have now given myself free reign to nurture the facets of myself that have nothing to do with being a mother. It doesn't mean I don't love and cherish my daughter with a power that could end wars. Rather, it means I'm still breathing, and that I have dreams to envision, and ideas to cultivate, and conversations to spark, and a lust for living that must fuel it all. I believe that holding onto my individuality is the most powerful gift I can give my daughter. Otherwise I'm just serving as an example for her to lose herself if and when she chooses the path of motherhood.

One of my girlfriends got a tattoo years ago, shortly after giving birth to her first son. It reads: "She still exists." I suppose she needed to remind herself that, although there would be immense sacrifices made in the wake of being responsible for another life, it was still okay for her to live on. She could still wander freely at music festivals, and explore strange lands, and dye her hair pink if it made her feel pretty, and be a wild thing in a world that sometimes tried to box her in. She recently reminded me of this tattoo, and it echoed back to me the most invaluable, heartfelt parenting advice I'd already been given. I made it my mantra and folded it into all my days. And it has since made all of the difference. Because it is my every intention to one day teach my daughter to love herself enough to do the same.