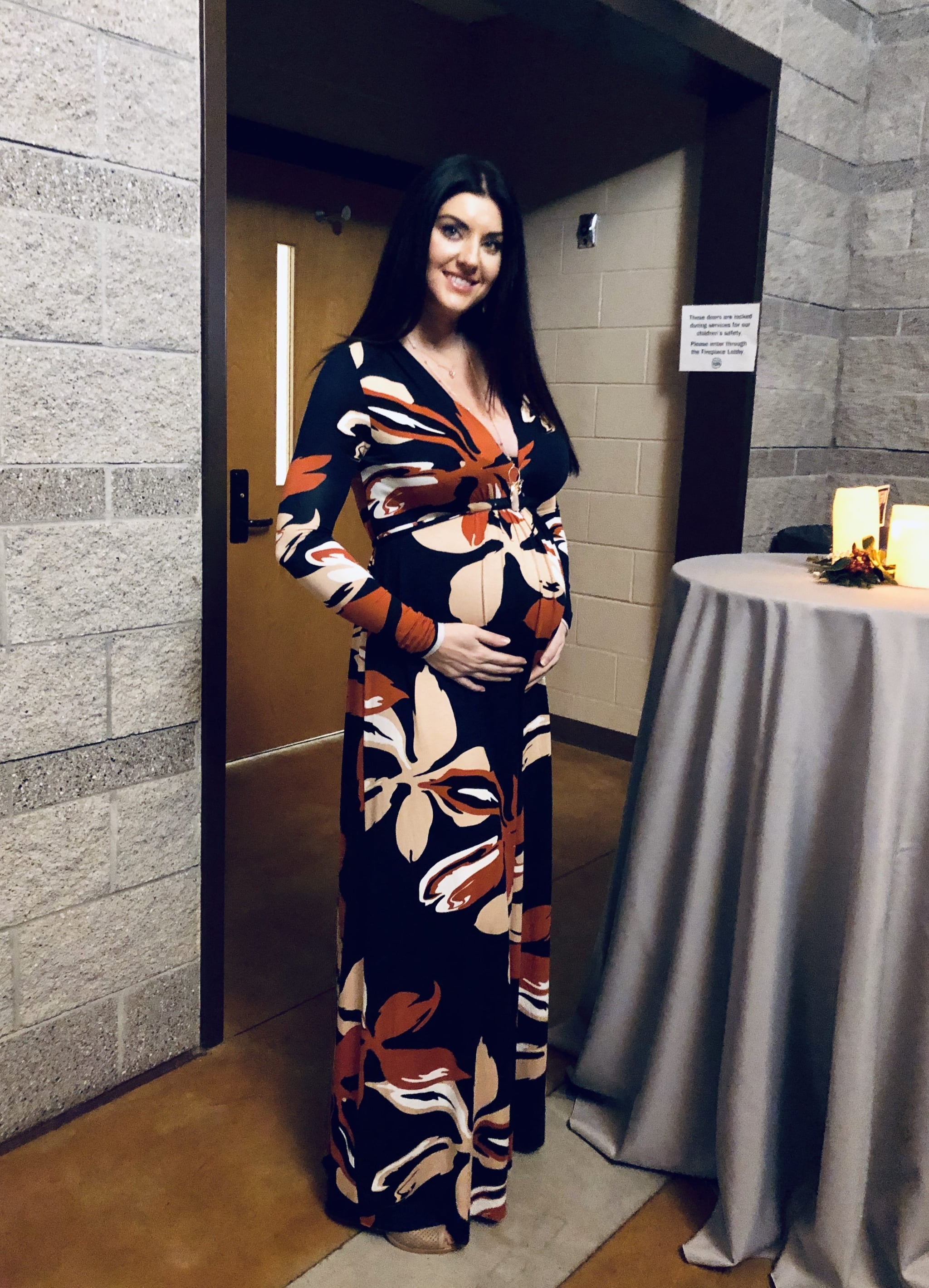 It was early in the evening in the middle of the Summer, just as the sun was beginning to set. I was standing in front of my bathroom mirror, sliding on my wedged heels and preparing to head out to a show with a friend. A moment later, I found myself frozen in front of the toilet, screaming my husband's name with such passion and vigor that the walls nearly shook, holding a positive pregnancy test in my hand.

We had been trying to conceive for several years, and had only recently pushed that dream away to focus on our careers and travels. I had taken the test as a mere precaution, certain my eyes were going to be met with the sadness of yet another gaping absence. But now my once elusive dream had attached itself to me, and that faint second line was asking to rearrange every puzzle piece of my life. I spent the remaining hours of that night in a confusing, sobering, and wonderful fog.

Little did I know at the time that the next few months would not only be spent swooning over sonograms and the thump of my baby's galloping heartbeat, but also gagging violently in response to anything remotely unsettling and racing out of gas stations and coffee shops to avoid smells that tortured every cell in my body. There was an abundance of loved ones eager to celebrate with us, and that was the most touching part of those early days, especially when it felt like surviving the flu. However, I didn't expect that so many long-lost acquaintances and strangers would be crawling from obscurity to terrify me with their cautionary tales. I quickly learned that never before had I had so much to fear, and never before had I had so many people eager to feed those fears.

Related:
Why I Wish I Hadn't Done Genetic Testing While I Was Pregnant

Every woman's body responds uniquely to pregnancy and labor, and I don't see the merit in unpacking offerings of caution and terror for excited and nervous new moms-to-be — especially to those one doesn't intimately know.

There were the superficial warnings that threatened my vanity, sure, from, "Go ahead and make peace with the fact that your body will never be the same again," often delivered with a wink, to a hairstylist remarking on the size of my massively aching, expanding chest, saying, "Girl, you're going to need a lift after this." One family member reminded me of how another family member's face and nose had swollen to more than double its normal size throughout her pregnancy, and how I needed to be prepared that it might happen to me. Sweet, I thought. That'll be fun.

When my husband and I learned we are having a girl and announced it on social media, I'd never seen so much evidence of love in my comments and text messages. But there were also the people who had truffles of negativity they wished to serve up — usually on a shiny platter that, at first glance, appeared to boast the luster of a compliment. "Oh, mama, watch out! The old wives' tale says that girls steal your beauty, but thankfully you have a lot of it to spare," one person wrote, inserting a smiley face emoji. It was kind of like being poked by a marshmallow with a dagger at the end of it. Another friend said, "Oh, get ready to lose your husband forever. He'll be so smitten with her that you'll be invisible from now on. Haha." Awesome, I thought. I appreciate you giving me so much to look forward to. While mildly annoying, those warnings never bothered me nearly as much as the ones to come would.

When an excruciating bout of headaches plagued me toward the end of my first trimester, I reached out to seasoned moms on Instagram and Facebook, inviting their remedies. I was desperate — tossing and turning throughout the night, my eyeballs panged with agony every time they met the glow of my laptop. I quickly learned that perhaps this invitation for advice should not have been announced publicly. While a band of gracious friends lined up to encircle me with helpful tips, there were also lurkers jumping into my direct messages, attempting to diagnose me with everything from fibromyalgia to early signs of preeclampsia. "I don't know how to tell you this, honey, but I developed fibromyalgia during the middle of my pregnancy, and I still have it 20 years later," one former colleague said. "I think that may be what is happening to you."

As the gates of my second trimester parted, and especially after I entered into the realm of being visibly pregnant, the more discomforting symptoms subsided and I continued to encounter my fair share of sweet moments. There began adoring smiles from elderly ladies, thoughtful gifts from friends, and congratulations heard nearly everywhere I ventured. But, sadly, there appeared the bounty of "experts" who were not only vocal in comparing the size of my expanding bump to every other pregnant woman they knew, but eager to dissect my birth plan — as if monitoring it was their personal responsibility.

Mostly, and without invitation, they wished to school me against certain decisions, while enlightening me to their failed birth plans, as well as that of their cousin, their former coworker, and that fellow mom they met one time at yoga class. There were tales of epidurals not working, of debilitating infections from C-sections, of such severe vaginal tearing that no sex could be had for a year. There were disconcerting accounts of landing on negligent doctors, NICU nurses, and lactation specialists, and horror stories about everything from postpartum hospitalization to organ malfunction, often illustrated by a humiliating visual in the realm of fainting or peeing on oneself in public.

It seemed the more dramatic, the more eager everyone was to divvy out the details. In more vulnerable moments, many of those narratives tempted me with worries surrounding my baby, her birth, and its aftermath: what if I don't produce enough milk? What if I, too, come upon a mean nurse and can't avoid her? What if I hemorrhage? What if this person is insinuating that I might suck at this whole thing?

I realize some of the statements were made innocently and playfully, and I have enough of a sense of humor to laugh along with many of them. I'm also not naive to the fact that this journey isn't a glamorous one, and that some of the more harrowing incidents I learned about had been a traumatizing reality for many women. Horribly unfortunate things do happen, and I'm not immune to any of them happening to me. Still, every woman's body responds uniquely to pregnancy and labor, and I don't see the merit in unpacking offerings of caution and terror for excited and nervous new moms-to-be — especially to those one doesn't intimately know.

As I near the end of my pregnancy, I have begun to think about other new moms-to-be also hearing these warnings, and then coincidentally being forced to live out the dark side of them, later reflecting upon them as having been some ominous sign. While I believe that advice from experienced moms can be a godsend, I think we've got to stop stinging each other with unfair comparisons and, above all, unloading cautionary tales so freely, especially when unsolicited. We've got to stop using tales of mishap and terror as a bonding tool, or perhaps as a means to assert our wisdom and expertise — extending insight to our less-wise and unseasoned counterparts. Maybe we could even lose our addictions to not only scaring the hell out of ourselves unnecessarily, but others as well.

Pregnancy is a delicate time of feeling foreign in one's skin — every obstacle and uncertainty is magnified by the hormonal saga one can no longer control. It's a season of submitting one's will to a biological agenda that transcends their own. Growing a human isn't easy, and the trek of new motherhood is full of peaks and valleys. Every birth represents a death to what one knows, and that can be an emotionally strange and rocky ground to navigate, no matter how beautiful and celebratory the destination may be. So, please, don't make it scarier for me.