Jalynne and Janelle the Day Before the Boys' Delivery Date

Identical twins Jalynne Crawford and Janelle Leopoldo took twinning to the next level three months ago when they both gave birth to baby boys on the exact same day. The 30-year-old sisters had due dates one week apart but ended up delivering on the same day in the same hospital, so that their parents could be present for both births. Jalynne, who lives in California with her three older kids and husband Brandon Crawford, a shortstop for the San Francisco Giants, packed up and set off to Janelle's home state of Arizona six weeks before her due date so the pair could deliver their boys together.

Both sisters couldn't be more grateful, not just for the happy coincidence that they both got pregnant around the same time but that they were able to expand their families after Jalynne suffered two miscarriages and Janelle struggled with fertility issues, was diagnosed with polycystic ovarian syndrome, and had an ectopic pregnancy — a pregnancy that develops outside of the uterus. On top of all that, the pair tragically lost their sister Jennifer last year.

"When I got the text my face lit up," Jalynne told People of when Janelle told her of her pregnancy news. "I got chills in my arm and then seconds later she called and we were both like 'Thank you, thank you God.' It's making me tear up right now. I was like 'This is God's way of answering our prayers.'"

Of the happy news that the twins could deliver their babies on the same day, Jalynne said: "[The doctor] said it was fine, they were the same gestational age and due within a week of one another. We both made it to 39 weeks and made it to our scheduled delivery day." Jalynne welcomed her second son and fourth child, Bryson Ryder, on the morning of June 18, and Janelle gave birth to her second child, Jace Alan, a few hours later. "We're going to remember this for the rest of our lives," Jalynne added. 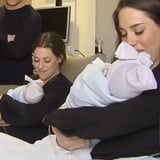