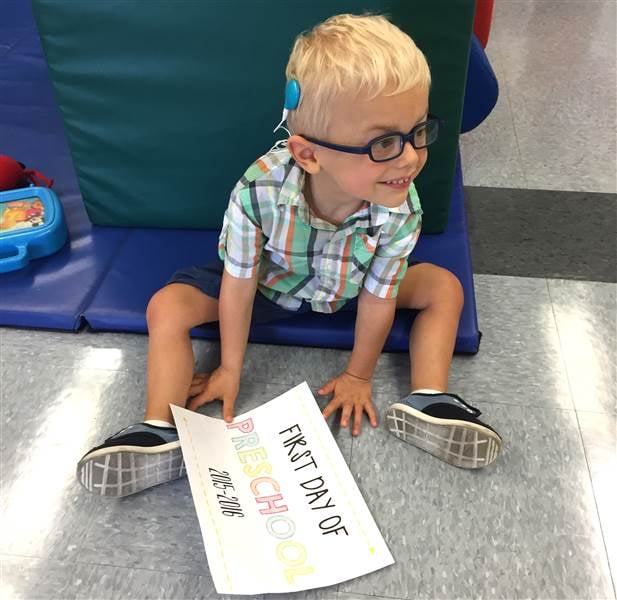 Last December, Ryan Aprea first stole our hearts when a video of the toddler went viral because of his heartwarming reaction to hearing his mother's voice for the first time.

After being delivered at 25 weeks, Ryan was born deaf in both ears and unable to hear until he received cochlear implants in 2014. And although Ryan occasionally gets frustrated with the implants, they have completely changed his life.

After this past year with the implants, Ryan now turns toward sounds and responds to simple commands. His mother, Jennifer Aprea, recognizes that all of his accomplishments are in part thanks to the implants, and she is especially moved by the friendships he has made at his new preschool.

"People love Ryan, and it's not hard to see why. He's such a sweet, adorable and endearing boy . . . and we are so touched by the kindness of others toward him," Aprea said. "As a parent of a child with special needs, you constantly worry about what it will be like when they go off to school, but the teachers and staff [at his school] have been so amazing."

From that first initial giggle at hearing his mom's voice to the first time he said "Ma!," all of Ryan's milestones throughout the year are now memories that Aprea cherishes.

This Christmas morning, Aprea received the best gift — a peaceful moment to watch her happy little boy play with all of the boxes and wrapping paper (in true toddler fashion!). "It's crazy to see how much more engaged ‪#‎minispraypal‬ 2.0 was with the whole Christmas morning craziness this year. I know part of it is that he's a year older, but we owe a huge debt of gratitude to his @advancedbionics ‪#‎cochlearimplants‬ I can't believe how much they've helped him understand his world over the past year!" she posted on Facebook.

Little Kids
If This Video of a Toddler Trying to Put On Her Pants Isn't All of Us While Social Distancing, What Is?
by Murphy Moroney 2 days ago