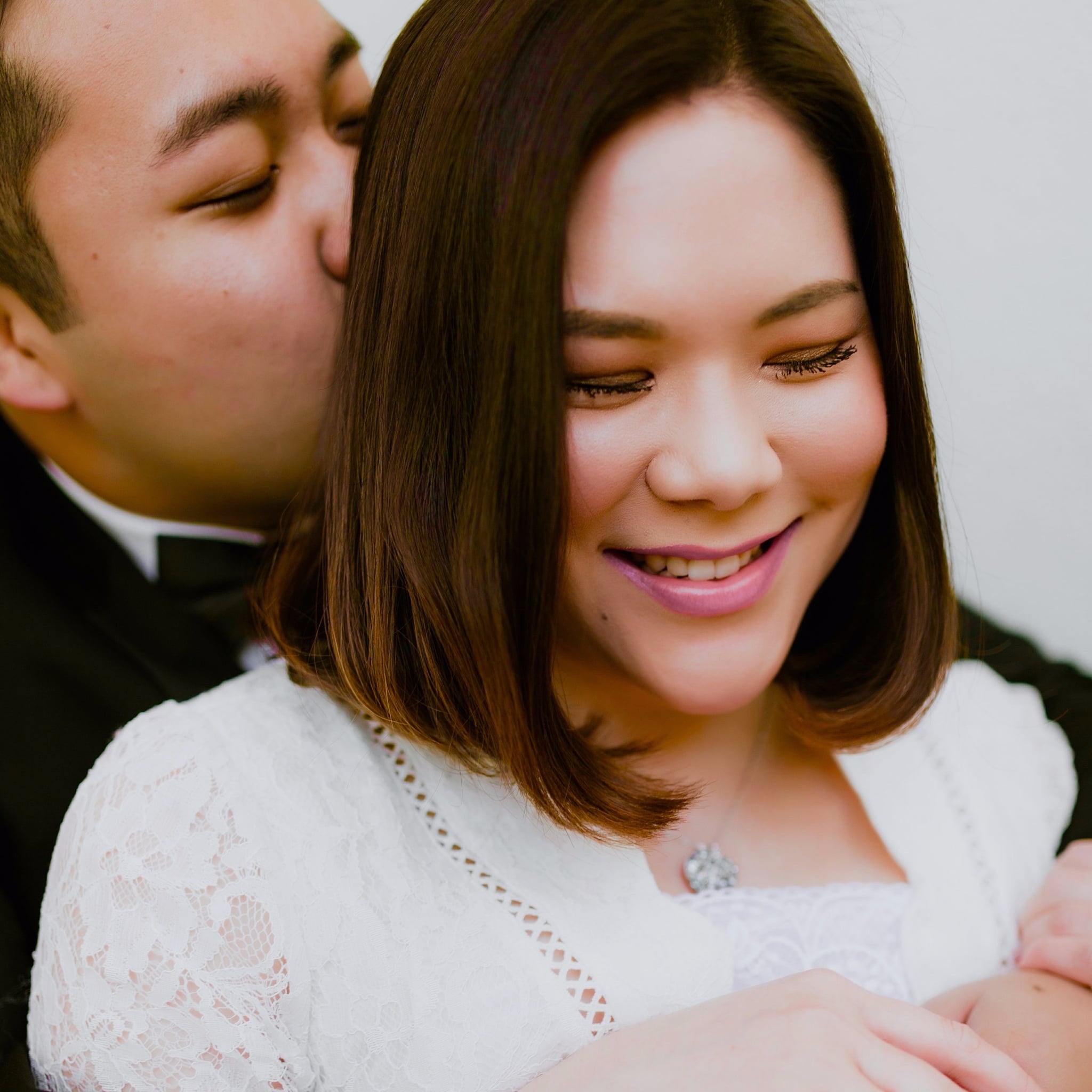 Orchestral music hums softly in the background as I step into a pair of stiff silver shoes. My friends simultaneously smooth my dress and fluff my hot-ironed hair, flashing reassuring glances at me before they leave the room. A deep breath does little to calm me, so I take one last sip of chilled Champagne. The bubbles run quickly down my throat, and my breath quickens as I step outside. I'm about to take the longest walk of my life. I lift my gown and hesitate briefly because something isn't right — there's someone missing.

Your 20s always seem like the most glamorous time of life (thank you, Sex and the City). It's an enchanting and thrilling series of milestones, from the good (college graduation and landing your first job) to the bad (work drama, rent hikes, and awful breakups that threaten to dim the joy of your newfound independence). While these obstacles are usually par for the course, losing a parent isn't one of them.

Last year, at age 24, I finally felt passionate about what I was doing — I'd saved up some money and made the scary decision to quit my job and pursue my dream of writing a novel. Everything was going smoothly, or as smoothly as writing your first novel can be. I finally felt like my life was on track.

Then, about halfway through my manuscript, I received a shocking phone call from my mom. My father was in the hospital, declining rapidly.

I swear I would have given a limb just to see him open his eyes one more time.

I dropped everything and flew to California to join my family. I was able to see my dad one last time before he fell into a coma. The next month launched us all onto an unwanted rollercoaster ride of emotions. Despite our best efforts to stay optimistic, my dad's condition worsened with each passing day.

Amid a routine of waiting room hangouts, neurology meetings, and hospital room visits, we tried to preserve a shred of sanity between us. Besides researching rare diseases and experimental treatments, there wasn't much else to do but hope. My sister and I took turns holding my dad's hand and talking to him. We read his favorite books aloud and told him about our days, wanting so badly for him to hear us. I swear I would have given a limb just to see him open his eyes one more time. Unfortunately, after several weeks of deterioration and decline, my father passed away.

At 24 years old, I felt like I was in an unusually awkward position — I wasn't a child who needed coddling, but I also wasn't an established adult with children of my own. When it comes to trauma, I'm a person who likes to act stoically. So, naturally, when it was time to plan his funeral, I tried to step up and take a central role.

I was the first person to lose a parent among my group of friends, so I didn't have any experience when it came to my dad's memorial. I tried my best to plan a service that I thought he would appreciate. My mom, sister, and I worked hard to make it more of a life celebration than a day of mourning. As impossible as it would have been, my dad wouldn't want us to be sad — he would just want us to remember him fondly.

In addition to mourning the loss of my dad, I found myself crying about the memories we would never make.

I ended up speaking at the funeral, since I knew that my father would have wanted me to. He used to be a sales trainer and presented regularly as part of his job, so my sister and I were used to rehearsing presentations forwards and backwards. To this day, my dad's memorial talk was the hardest speech I've ever given.

Experiencing the first few weeks without him made me realize what else was yet to come, from big moments to trivial ones. I'll never get to have another conversation with my father. We won't ever play another tennis match or go on a bike ride or swim in the local pool. He'll never know that I finished my novel or that it was published this year.

Above all else, my father's death forced me to consider my own mortality in a new way. He was 52 on the day he passed away — more than twice my age, but still extremely young. I wished so badly that I could give 100 years to him . . . that I could somehow give him part of my future.

Life is short. It's no secret by any means, but death can be a refreshing reminder of just how precious life is. Part of me wanted to turn away from this realization, to hide under my covers and watch Seinfeld reruns. I've definitively had plenty of those days, but I've tried hard to break the pattern.

It's been just over a year since he passed away, and I still have to make a constant and conscious effort to keep trying. I know that this road is a long but worthwhile one. Overall, I've realized that each day is a crossroads. I can either stop living my life and let the sadness define me or I can live with more drive than ever before.

It broke my heart that my dad couldn't walk me down the aisle, that we couldn't have the father-daughter dance that we'd planned months in advance.

My novel, Swearing Off Stars, was published on Oct. 3. In my own small way, I paid homage to my dad by dedicating it to him. He was always a big influence in my life, and he continues to motivate me even though he's no longer here. My dad has become my inspiration in a sense — a reminder to laugh harder, love deeper, and live bolder.

My then-fiancé, Chris, and I were supposed to be married right after my dad fell into the coma. Of course we postponed our wedding for the time being — I honestly couldn't imagine myself getting married without him there. But after he passed away, I knew in my heart that he would want me to get married. Although we changed the venue, I married Chris at the end of that year. It broke my heart that my dad couldn't walk me down the aisle, that we couldn't have the father-daughter dance that we'd planned months in advance.

I imagine him by my side as I make my way toward the altar. The wintry sun sets while I take another deep breath, inhaling crisp December air as I go. For the first time since he passed away, I feel my father's presence. It's a warmth I can't explain — a subtle feeling that reassures me. As I gaze into the crowd of familiar faces, he's nowhere to be found. But I know that in some way, shape, or form, my dad is right there with me.

Danielle M. Wong is the author of Swearing Off Stars, an LGBTQ+ romance set against the 1920s gender equality movement in Britain. Connect with her at daniellemwong.com.