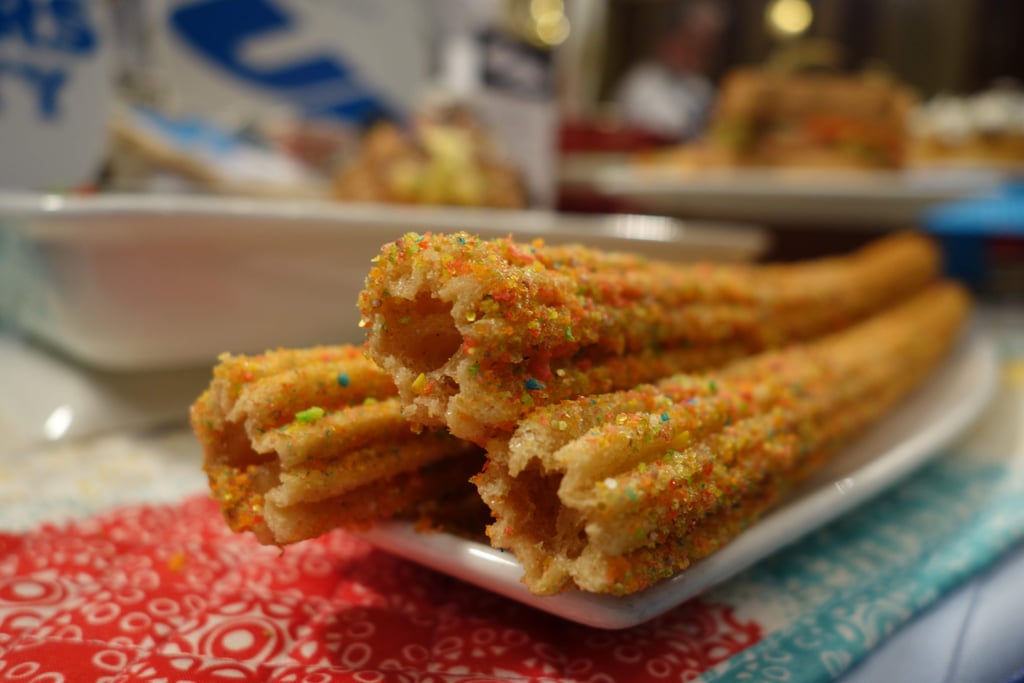 You Won't Believe What Disneyland Is Planning to Do With Churros

Some Disneyland fans are Mickey Bar obsessives, others are cake pop people — and then, well, there are the rest of us. Churros are easily the best handheld snack at the happiest place on earth, and the three new versions arriving to Disneyland Resort on April 13 for Pixar Fest are shaping up to be some of the greatest.

A multicolored fruity churro with lemon sugar — nicknamed The Snipe, of course — will honor Up's bold bird Kevin, and a Lots-o' Straw-"Bear"-y Churro, sold in Tomorrowland, will feature bright pink sugar and that trademark strawberry scent of the Toy Story 3 character. The most exciting of the three, though, is Frontierland's Coco churro, which comes topped with chocolate powder, vanilla bean, and salted cinnamon sugar, served with a Mexican chocolate dipping sauce that's got a smoky chipotle kick.

While a trio of new takes on the theme park favorite seems like a big step, the funky churro phenomenon has only just begun. As it turns out, there may be even more flavors on the way, both throughout Pixar Fest (which runs at both parks until Sept. 3) and at a permanent Toy Story-themed churro stand debuting within Pixar Pier at Disney California Adventure on June 23. In talking to Disney's culinary team, we learned that there's going to be an "explosion" of ever-changing churros going forward, meaning that fun new flavors are no longer a seasonal thing — it's the future.

The cinnamon-sugar treat has been likened to a kind of canvas for ongoing interpretation, and we have a strong sense that a variety of different churros always for sale across Disney's two California parks — possibly even one for each land — seems to be on the horizon. We even heard rumblings from the culinary staff of possible "hidden churros" and even a "churro challenge" — seriously! — which sounds like our kind of sporting event.

It's hard not to see a parallel between these and Disneyland's overseas counterpart, Tokyo Disneyland. The beloved Japanese resort is known for selling wild and often wacky flavors of popcorn at stands across its two theme parks that change throughout the seasons. With a rotating selection of flavors like curry, soy sauce and butter, white chocolate, black pepper, and herb and tomato, park-goers are known to try them out regularly in a way that is eerily similar to our endless churro obsession.

Despite seasonal iterations of the beloved park snack being relatively new, they've exploded in popularity, with churros flavored like peppermint, pumpkin spice, and s'mores, covered in rose gold glitter or available in Cars racing colors, proving successful in the past few months alone. (It's worth noting, too, that seasonal Mickey-shaped beignets have also become crazy-popular.)

We're not entirely sure if the Anaheim park's intention is truly to offer a constant rotation of delightful flavors or if they'll just be rolled out more often, but if it happens, we are here for it. Having new iterations of churros for sale makes grabbing an old favorite that much more exciting every time we visit Disneyland, and tasty takes on our favorite Disney movies and Pixar films are always a good excuse for an anytime indulgence. Read on to see photos of the new snacks!

Pixar
Obsessed With Toy Story? You Need to See the New Pixar Collection at BaubleBar
by India Yaffe 2 days ago