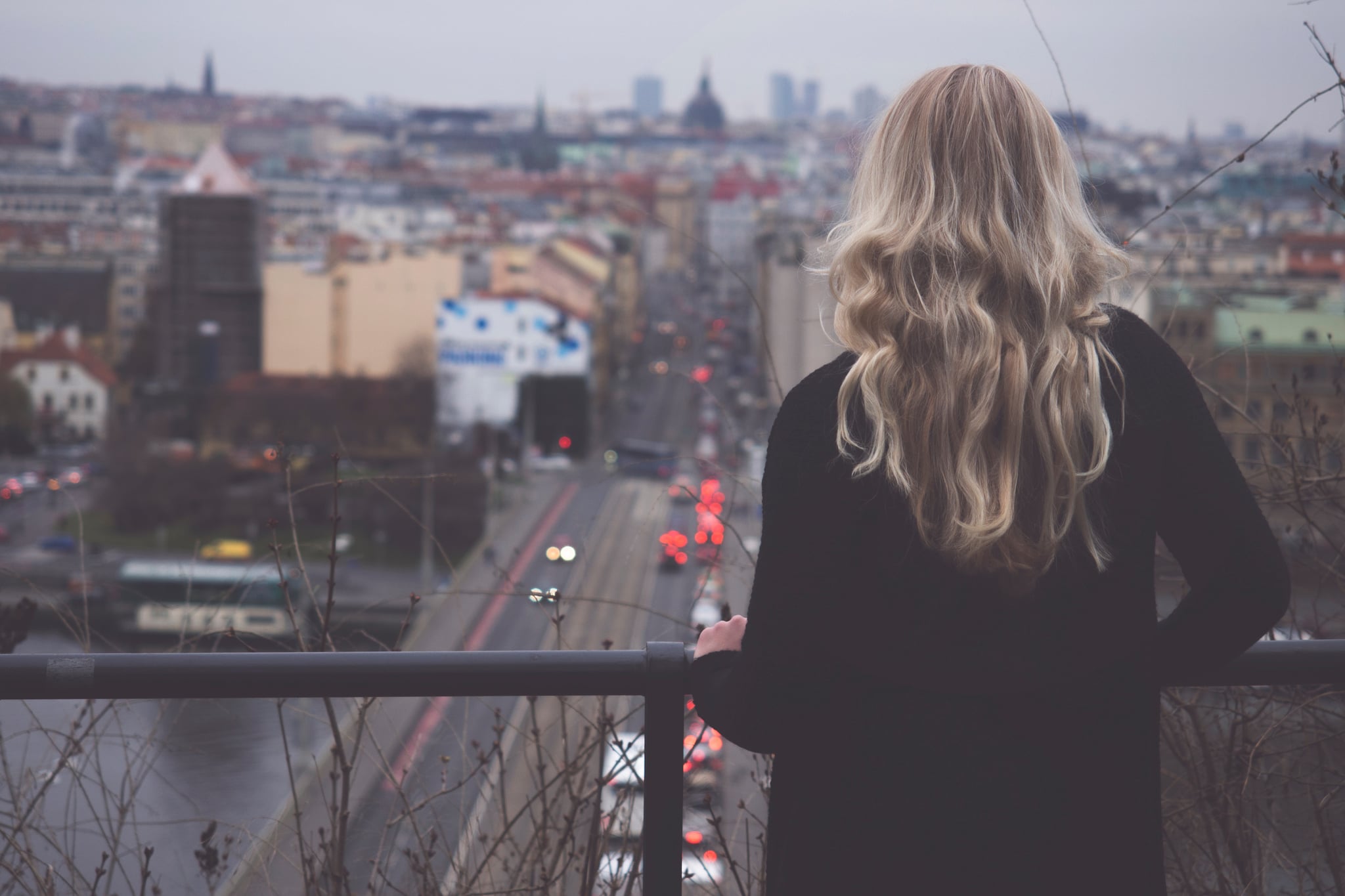 "Your career won't keep you warm at night when you're old!"
"Isn't it lonely, without children?"
"Man! I wish I had it easy like you; no daycare expenses, no playdates, total freedom!"

I spent my whole life avoiding getting pregnant. I would take every form of contraceptive my gynecologist would write me. I kept a stash of Plan B in my refrigerator like they were Chinese restaurant sauce packets. I avoided pregnancy as if it were a death sentence, and the ironic thing is that now, I can't get pregnant.

My early 20s were spent focused on my education and my career, nose constantly to the grindstone. I moved from a rural town with a depressing landscape and even more depressing economy rooted deep in the steel mill industry and headed for the Big City. My job was a fairly high-ranking VP position for a national bank, something very unusual for someone barely 25. Managing a team of 15, we were responsible for 35 percent of the company's revenue yearly. I had zero time to even entertain having a kid, let alone think I was fit to have one.

I was irresponsible and reckless in every other way, however. I used unpaid speeding tickets as bookmarks. My version of grocery shopping was grabbing buffalo wings and picking out what to mix with vodka when I was tired of Red Bull. (Life hack: Capri Sun does the trick.) Late-night partying into my 30s, binge drinking, a diet that would give Mama June a run for her gravy-and-biscuit-loving money served with a side of frequent sleep deprivation. Top it off with self-loathing and body-image issues, and I was the poster child of who shouldn't have a kid — or a plant, for that matter.

I was barely able to keep the lights on and buy gifts for all my friends who were cranking out kids like I was cranking out cold calls to recruiters.

And somehow, my career was flourishing. I was quickly clawing my way up the boiler-room ladder, zeroed in on success and financial stability. A few times, I stumbled. Specifically when the recession hit and my industry — and ego — took a blow. Layoffs, closures, menial jobs postrecession to make ends meet until the world economy picked back up again. I ate ramen noodles six nights out of the week and skipped breakfasts to afford dry cleaning for my suits. I skimped on oil changes to continue printing résumés at Kinkos as a ticket to ride the job interview merry-go-round. How could I have afforded formula, diapers, or tiny little outfits? I was barely able to keep the lights on and buy gifts for all my friends who were cranking out kids like I was cranking out cold calls to recruiters.

Where my friends were renting tiny apartments in desirable zip codes to afford kindergarten tuition for their children, I was blowing my disposable income on travel, designer shoes, and a supercute turn-of-the-century fifth-floor walk-up in the city. The envy of all my friends with my freedom, savings account, and shirts without spit-up, I still felt inadequate. Be it the fear of missing out — on what? I was at all the places to be, doing all the things to do — or the nagging feeling that time was slipping through my fingers like sand, I felt as if I was behind the curve.

Was I missing out by not having a kid? Is there something about being a parent that just zips up your life into this neat little box that makes it oh so worth it? Every bad situation for the rest of your life is dulled like a butter knife because you have reproduced?

Related:
See Why This Woman's Facebook Rant About Baby Plans Has Gone Viral

My friends weren't necessarily glowing with happiness. Some were divorced or on their second marriage because of the stress of having kids so young. They were struggling to make ends meet, paying for private preschools while acting as permanent chaperone for the life they brought into this world. Some missed out on job promotions, 21st birthday parties, furthering their education, or starting their own business. They didn't quite seem like the epitome of happiness . . but neither was I.

In a string of absolutely terrible relationships — I tried to have a child with one person for over a year thinking, "Hey, genetics will do this kid well, he seems like a well-enough mate," and I never got pregnant; the world works in mysterious ways — a bevy of bad jobs, crappy cars, and a meth addict neighbor who had a penchant for singing opera whilst hammering pictures into his walls at 4 a.m. put me in the running for a walk-on role on The Walking Dead. I was spent, but I was enjoying just living life. And the entire time, I had a thought clawing around in the back of my head that I was doing it all wrong.

Growing up, my mother always told me to focus on education, career, and myself. Hold off on or don't even have children. She herself was married, and subsequently divorced, fairly young. Sometimes, I felt that her beating this doctrine into my head was to keep me from making the same mistakes she did. But was it really a mistake? Was having me, my dad, a house in the 'burbs, and all the things the Cleavers said we needed to really all that bad?

Bottom line is, I was doing exactly what she wanted me to, and I felt miserable about it. I felt as if I was abstaining from having kids because she didn't want me to procreate, not because I myself didn't feel it was right. Or at least that's what I was telling myself.

What changed from 22 to 32 that all of a sudden I wouldn't feel like dying if the little window showed me a "+"?

Now, in my 30s, I can see the future a little clearer. Gone is the hops-induced haze that clouded my judgment when it came to dating. I'm in a healthy, strong, and trustworthy relationship. We've tried for a child, and failed. I can't help but feel like it's my fault. One too many beers. One too many food truck churros. One too many Plan B-and-vodka cocktails. I have to be OK with this, because it was a stance I took a decade ago. What changed from 22 to 32 that all of a sudden I wouldn't feel like dying if the little window showed me a "+"?

Month after month, my body lets me down. It's like your period is Mother Nature's way of punishing you for not getting pregnant, not functioning as designed. Take bloating, shame, depression, acne out of nowhere, and cramps that could bring down a mountain lion, and add that to the fact you just heard about a woman's third unwanted pregnancy without so much as batting an eye. It's enough to drive you insane. Back to the vodka/Capri Sun cocktail. You pout at the kitchen counter pounding vodka whilst sipping juice through an unbelievably tiny straw and wonder, "Maybe this is why I can't get pregnant? Maybe this is the rest of my life?" I know that these aren't the reasons. I know that infertility is a widespread issue, that I'm in the same boat rowing with over 1.6 million women, all of us crying, bloated, raging, and hormonal. I know it's my genes, and not my fault entirely.

Related:
5 Things to Say (or Do) When People Ask If You're Having Another Baby

Struggling with this for the past few years, I looked for a reason. Turns out there is no right answer. I worked so very hard to accomplish as much as I could in my 20s, and I will continue to reap the benefits. A superyoung woman in a male-dominated industry kicking ass and taking names while only getting praise and recognition in her field? I can't let myself down or forget how important all the things I have done are. I have been successful at just about anything I put my mind to but this, and I cannot let this define me.

My partner and I will traverse this spinning blue marble called Earth together, hand in hand. He is OK with it just being the two of us, and for that I am tremendously grateful. I just have to realize that I'm alright, he's alright, we're alright, and this is alright too. Soon, my friends' kids will be grown and out of the house, and I will have my friendships back. Conversations will go back to adult things, like 401(k)s and vacation homes, instead of teething rings, Goddard Schools, and organic beet puree.

The grass will always be greener on the other side, and it took me a decade to realize it's because the other side pays a Homeowners Association Fee to maintain the lawns.