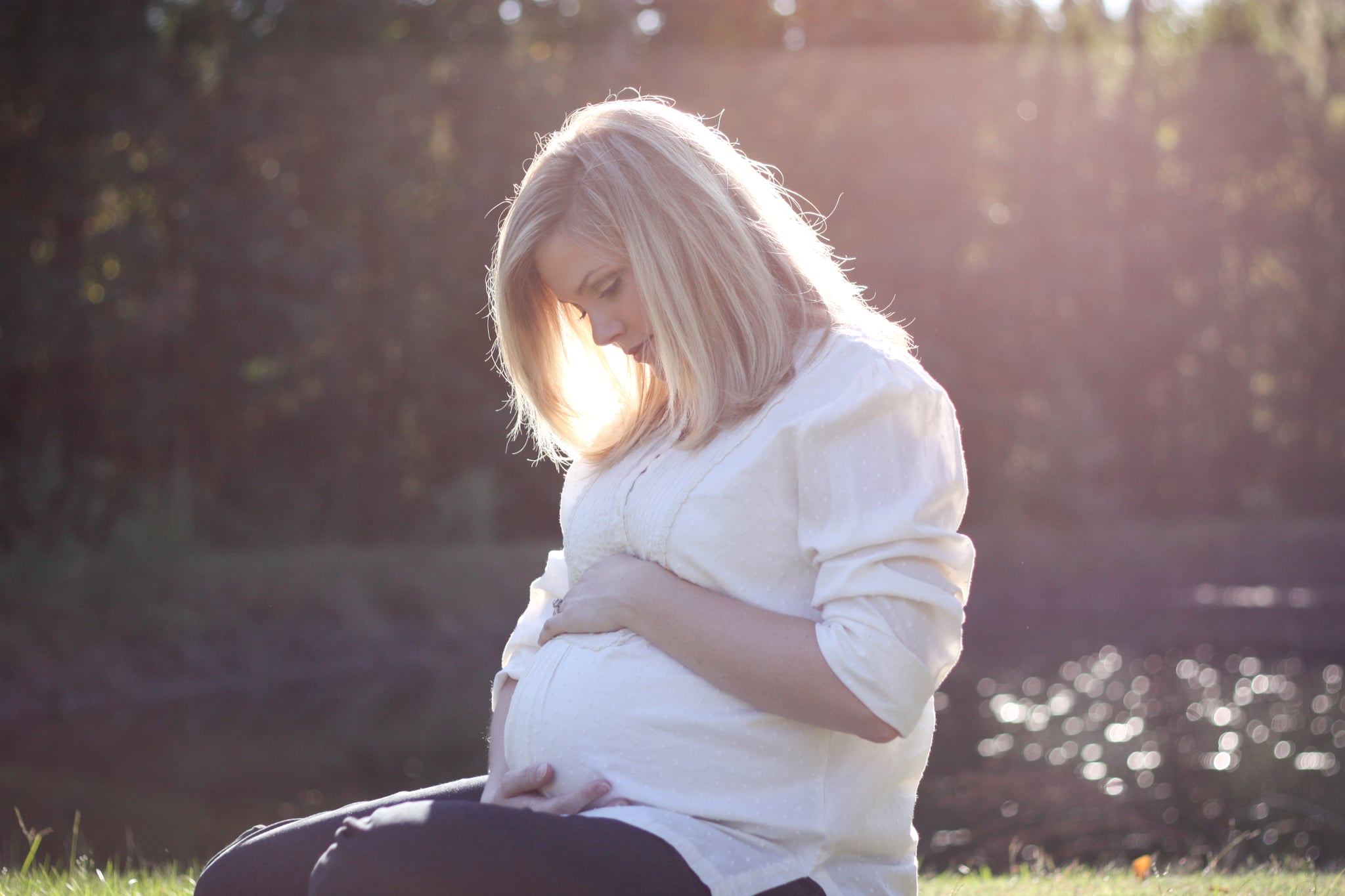 I pride myself on being on time. As a type-A, anxious overachiever, I am used to delivering projects ahead of schedule and under budget. I graduated from college in three years instead of four. I like to get places early, I like not feeling rushed, and most of all, I really, really like to plan.

Having a baby is something that everyone thinks can be planned. You think you can plan when you get pregnant, until you learn — often the hard way — that it always happens when it happens. I remember once saying that the only time of year to have a baby is between March and May, and why on earth would anyone do it any other time? I was 20. (Let the record show that my second kid was born in January. BECAUSE THAT'S WHEN IT HAPPENED.)

I love it when I overhear nonparents saying things now about their plans for having a baby in the future. "We're definitely going to have a baby in 2018." "For my job, Winter is the best time to take paternity leave, so we'll do that." And, my favorite, "We just booked a trip to [insert foreign country or relaxing beach destination] for when our unborn baby will be about 3 months old. We'll all be ready to travel then, right?"

I'm not saying any of this to be mean or to laugh at those sweet, naive innocents. I used to be one of them.

My first baby was due on May 18. We were too anxious to be excited, too organized to get caught up in whimsy. We were busy planning. We took classes on "Choices in Childbirth" and wrote a birth plan. We hired a labor doula and a postpartum doula. We made meal plans and grocery lists and bought heavy flow pads for postpartum bleeding. We froze those organic cotton pads, soaked in organic witch hazel, so that they would be soothing during recovery. We took a class on breastfeeding and infant massage. We made spreadsheets. We were Prepared with a capital P.

I left my job at a tech startup in April so that I would have exactly six weeks to "nest." I took prenatal yoga and did acupuncture. Our Jewish traditions kept us from setting up a nursery, but we sent lists to relatives of what to buy as soon as the baby was born, complete with instructions on what all-natural, unscented detergent to use when washing it all.

It was a lot of planning to hide our fears.

In case you're starting to hate us a little bit reading this, yes, it was a lot. It was a lot of planning to hide our fears and anxieties about the huge change we were about to go through. Even though I knew that intellectually, it wasn't until the evening of May 18 that I finally realized what was going on.

I. Had. No. Control. Over anything. Ever again. And it was terrifying.

That night, when it became clear that even if I went into labor that very moment, I was not going to give birth on the 18th as planned, I collapsed on our couch with a pint of ice cream.

"I'm a failure," I said to my husband, hogging the ice cream.

"How do you figure that?" he asked patiently.

My loving, patient husband reminded me that only about five percent of women actually give birth on their due date. We learned that in Choices in Childbirth. Or was it Newborn Care?

I knew that. Of course. No one preps and plans as much as I did without taking in all the statistics, but I still thought that my baby would arrive on time because that's how we roll in this family. It didn't make logical sense, but please remember I was officially 10 months pregnant if you do the math.

I felt the weight of the world on my shoulders. I somehow had gotten the idea that I was letting down everyone in my life by not producing my baby on time.

I somehow had gotten the idea that I was letting down everyone in my life by not producing my baby on time.

On May 19, even though we'd been pretty quiet about our pregnancy on social media, friends started posing messages on my Facebook wall to the tune of "No baby yet?" and "OMG, so exciting, are you in labor right now?!" even though absolutely nothing was happening in that department. I felt like a fraud.

"Maybe this baby is never coming out," I said to my husband that night. He had kindly brought home a new pint of ice cream for me.

"That's not really an option," he said patiently (did I mention he is really, really patient?!). "One way or another, you'll have this baby soon. Let's try and enjoy this extra time."

Ha! A nice thought. But anyone who has ever been 40 weeks pregnant, or 41, as I soon was, can tell you that the "enjoy" ship has sailed by then. I was beyond uncomfortable. It hurt to sit, it hurt to stand, and lying down was misery. My belly was so huge that lying on my side, as pregnant women are told to, caused insane hip pain. I spent my nights on the couch so my tossing and turning didn't wake my husband, flipping from side to side every hour to relieve the pain. I used a careful assortment of pillows to support my back, my legs, my knees, and my ginormous belly. Not that it helped.

During the days, I walked. I huffed and puffed around Brooklyn, because carrying around 42 weeks' worth of baby and pregnancy is hard, and with my short torso, there was very little room for my lungs to inflate. I ignored the guy on my block who liked to ask if I was having triplets. It seemed like most people hadn't ever seen an overdue pregnant woman. No, we are not having triplets, that is just how it looks to lug around a fully grown child.

Every night I went to sleep thinking, "Surely this is it!," only to wake every morning like Bill Murray in Groundhog Day, with the proverbial "I Got You Babe" playing again.

My husband and I went to the park. We took long walks. We got a lot of iced coffees. We polished off many more pints of ice cream. We went to the movies and I missed many a climactic scene to go pee. We schlepped to Manhattan's Upper East Side every other day for hospital-mandated post-due-date non-stress tests to make sure the baby and I were both fine. We were. And then, suddenly, I was 41 weeks and five days pregnant. (The American Congress of Obstetricians and Gynecologists recommends that women be induced before 42 weeks of pregnancy, as complications are far more likely to occur after that date.)

We had been trying all the usual tricks to get labor started since 40 weeks — spicy food, sex, rigorous walks, acupuncture, reflexology — and had reached the end of the line. As my husband had said, this baby had to come out one way or another.

We went to sleep one last time, the night before our scheduled induction. The hardest part of that for me, besides the fear of all the pain and possible complications, was that induction usually takes a day or two, which pointed to our baby being born in the early hours of June 1.

"I want a May baby," I sobbed. "I was promised a May baby!" I'd like to pause again here to point out that I was, for all intents and purposes, 42 weeks pregnant. I hate to throw my hormones under the bus, but I was possibly not in my most rational frame of mind.

The bottom line is that, after all that, my body knew what to do.

Expecting to wake to the strains of "I Got You Babe," I awoke instead to mild contractions on the morning of May 30 and proceeded to give birth later that day. Not to skip over all those exciting details, but the bottom line is that, after all that, my body knew what to do. The baby and I were both waiting for the right moment. When that right moment came, it all unfolded exactly like they said it would in Choices in Childbirth.

Our daughter weighed in at just under 7 pounds, proving that she probably needed every last moment of those 42 weeks to "cook." I am guessing she was also just really comfortable and didn't feel like coming out any sooner than she absolutely had to. She gets that from me — I know the feeling — and besides, when I was born back in the 1980s, I was a full three weeks late. (Yes, the doctors let my mom go 43 weeks, and yes, she's a hero.)

Moral of the story: sometimes you just can't control everything, or, well, anything, no matter how hard you try, and in the end, it doesn't really matter. I'm not going to pretend that it was smooth sailing from there because, hello, postpartum anxiety and breastfeeding challenges, but the baby and I were happy and healthy overall and my patient husband continues to be amazing.

We even eventually decided to do that whole baby thing again, and welcomed our son at 41-plus weeks in between January blizzards. This time, no one ever once even mentioned my due date, induction, or what would happen if I went to 42 weeks again. And I was way too busy enjoying the crazy chaos of my unpredictable life to even wonder.