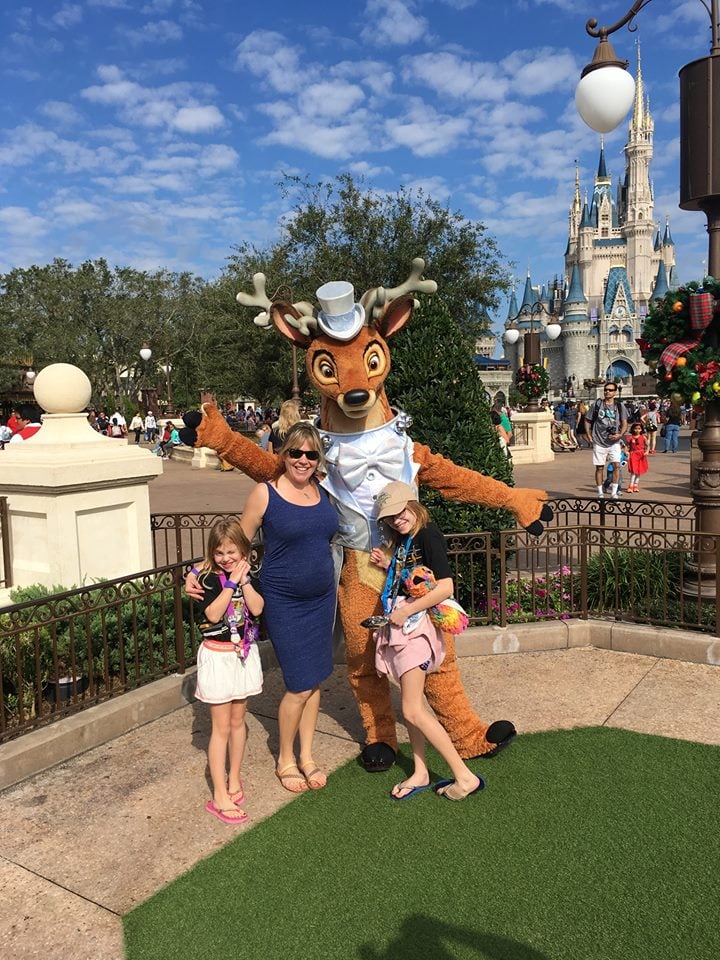 Looking around our house in the weeks leading up to Christmas, I began to feel a little weird. What was I going to get my kids this year? They already had too much stuff, and giving them more gifts they didn't need just didn't feel right. That's when I had a brilliant idea. What if we gave our kids an experience instead of gifts? And what better experience than a family trip to Disney World?

I began planning an epic Christmas vacation that both my kids and my husband and I could enjoy. We would do the unthinkable: celebrate Christmas away from home. At first I was nervous that bucking tradition was going to lead to disappointment. After all, there would be no gifts waiting under the tree on Christmas morning, we wouldn't be leaving cookies out for Santa the night before, and the stockings would be hung by the chimney with care yet empty on the day the kids waited for all year.

Related:
12 Reasons You Need to Visit Disney World Around the Holidays at Least Once in Your Life

The best part was being able to focus on spending time with my family instead of rushing around like a holiday ham with my head cut off preparing for the big day.

I reasoned we had next year and so many years after that to do what we always did for Christmas. This year would be an experiment, and if it went awry, we'd never go away for the holiday again. But I felt like I needed to shake things up a bit. And so, planning continued full-force. We would leave for Disney the day before Christmas Eve and wake up at the resort on Dec. 24, spending Christmas Day at the most magical place on earth. My husband and I decided to give our kids one gift each before we left for our trip. We'd tell them Santa knew we were going to be out of town so he made an early stop. Then, we'd present them with a few Disney gift cards on Christmas morning so we didn't have to travel with any presents.

We told our kids about the trip as we were planning in order to build excitement and prepare them for things to be different this year. They were majorly pumped, if their jumping around and screaming wildly were any indication. And once it was out there, I felt a weight lifted off my shoulders. I could skip all that frantic shopping and those late-night wrapping sessions. I wouldn't even have to cook or bake up until the last minute like I usually did. What a relief!

Related:
Heading to Disney World For Christmas? You Won't Want to Miss These 4 New Attractions

And then we were off. We arrived at our Disney resort late and went right to bed. The next day was Christmas Eve, and our family enjoyed a truly magical day. The weather was perfect. We swam in the pool, went to parks, enjoyed incredible holiday decorations and out-of-control Christmas spirit, met characters dressed in their holiday best, sampled seasonal treats, and watched a special Christmas parade featuring Santa. The best part was being able to focus on spending time with my family instead of rushing around like a holiday ham with my head cut off preparing for the big day.

But I'll admit that celebrating Christmas at Disney also had its drawbacks. It felt weird eating room service for dinner in a hotel room, then tucking the kids into the pull-out sofa instead of their own beds. And the crowds. Apparently we weren't the only family who had this idea, and it was very, very busy. But it being Disney and all, we still absorbed enough holiday cheer to make it feel like Christmas. The next morning, there was still a lot of excitement in the air, and I honestly didn't miss being at home all that much. Our kids were thrilled to wake up at Disney and loved the idea of shopping for their own souvenirs with their gift cards. And we capped off the trip with Christmas dinner at a restaurant at Disney Springs.

Related:
20 Pieces of Disney Holiday Merchandise That Really Do Bring Joy to the World

In the end, spending Christmas at Disney was a wonderful experience that I feel very lucky to have been able to give my kids. We made memories to last a lifetime, and it was a lot of fun trying something new for the holidays. Watching my kids' excitement was the best part, and being away also meant less stress for me. But now that we've done it, we won't be making it an annual thing. Having been at Disney for the holidays last year, we can't wait to enjoy a cozy and old-fashioned Christmas at home.