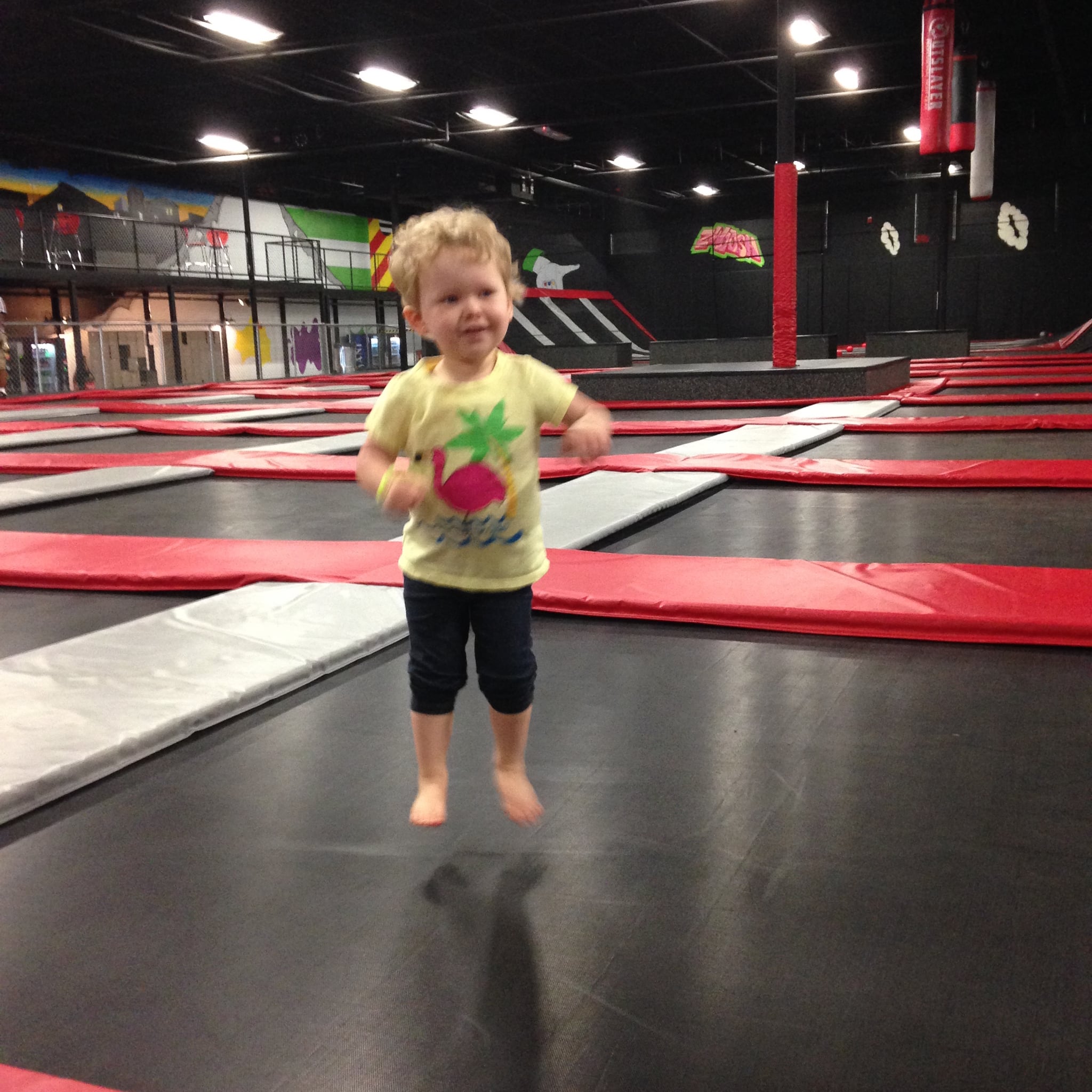 I had been a nanny for just about two years when Little Man's mom asked me if I wanted to take him to the local trampoline park with a few of his friends. I obliged, always jumping at any opportunity to get us out of the house and into a world containing other adult humans. However, I could not have prepared myself for the special hell that is a giant room filled with springy, wall-to-wall death traps in which you have approximately zero control over your children.

Upon arriving at the bouncy mecca, my pint-size employer and his friends ran straight for the first trampoline room, discarding their shoes, jackets, and behavioral skills with reckless abandon. It took a bribe to stop at Dunkin' Donuts on the way home, but I got him to turn back around to follow me to the shoe cubbies, where he sat on a bench waiting for approximately 20 seconds. Those benches should really have harnesses.

My pint-size employer and his friends ran straight for the first trampoline room, discarding their shoes, jackets, and behavioral skills with reckless abandon.

Once my second heel was out of its shoe, the kids had begun running again, and the other moms and I exchanged a why-the-actual-eff-are-we-doing-this-to-ourselves look. Leaving my keys, wallet, and sense of authority shoved haphazardly inside a cubby, I ran to follow the boys, who were already approaching a section they weren't meant to be in, full of screaming teenagers flipping their bodies in ways that seemed impossible.

Four or five "why not?"s later, and we had gotten the kids to the area designated for toddlers, where wobbly tots were jumping a few inches off the ground to the proud coos of their moms. As the boys started jumping from the trampolines into large pits of styrofoam cubes, I prayed to the nanny gods that my little guy wouldn't break one of his soft, malleable toddler bones on my watch.

Just as I was starting to feel less overwhelmed and that the morning could actually be bearable, characters came out. Spider-Man, Elsa, and Elmo came running from the back with smiles plastered on their teenage faces, and they began to jump with the kids — half of whom started to freak the hell out, because costumes.

The boys were impressed with Spider-Man for a second, until the troublemaker of the group realized that the styrofoam cubes were light enough to throw directly into Spidey's face. The high school boy likely making minimum wage was a good sport, but I could tell that his faith in humanity was beginning to diminish right before my very eyes.

I subtly suggested that maybe our morning of hell fun should be coming to a close, as toddler time is only two hours long anyway. But everyone protested, saying that the 10 minutes we'd been there was nowhere near long enough. Ugh, fine.

So the boys continued jumping, climbing up the springy walls and sliding back down, and tossing their tiny bodies into the styrofoam pits over and over. At least he'll take a great nap this afternoon, I thought. (Spoiler alert: he didn't nap that day. Of course.)

Have you ever tried to reach a child who fell into one of the corners of a bouncy castle? . . . It's like climbing Everest while ball-pit balls rain down on you.

And that, my friends, is when Little Man wandered off and discovered an entirely hidden section of bouncy castles bobbing away in poor lighting. Well, f*ck. As I'm sure you can imagine if you've ever watched your children jump in a bouncy house through the tight, sweat-stained mesh walls before, it was simultaneously boring AF and nerve-racking. Have you ever had to rescue a child who fell into one of the corners of a bouncy castle and is panicking because they can't get out? It's like climbing Everest while ball-pit balls rain down on you.

To whomever decided that a room full of dangerous, slippery trampolines also needed drooly bouncy castles, you definitely don't have kids, and I hate you.

Although I didn't think I'd be in this situation, I found myself begging him to go back in the trampoline section. With the doughnut bribe count at two chocolate-glazed doughnut holes, we made our way back to apparent civilization.

Although the sounds of screaming and crying got louder as we approached, I convinced my worrying mind that everything would be fine, and we'd return home with fully operational limbs soon enough. And that nap time would most certainly occur on the heels of the munchkin sugar high — I was so optimistic back then.

During the next hour, only a few minor incidents occurred, including:

After those exciting events, we were all ready to walk back to the cubbies holding our belongings, which were miraculously not stolen. As the boys slipped on their coats and the moms and I made plans to "do this again sometime," I silently vowed in my head to never, ever, under any circumstances, return to this devil's play-place again.*