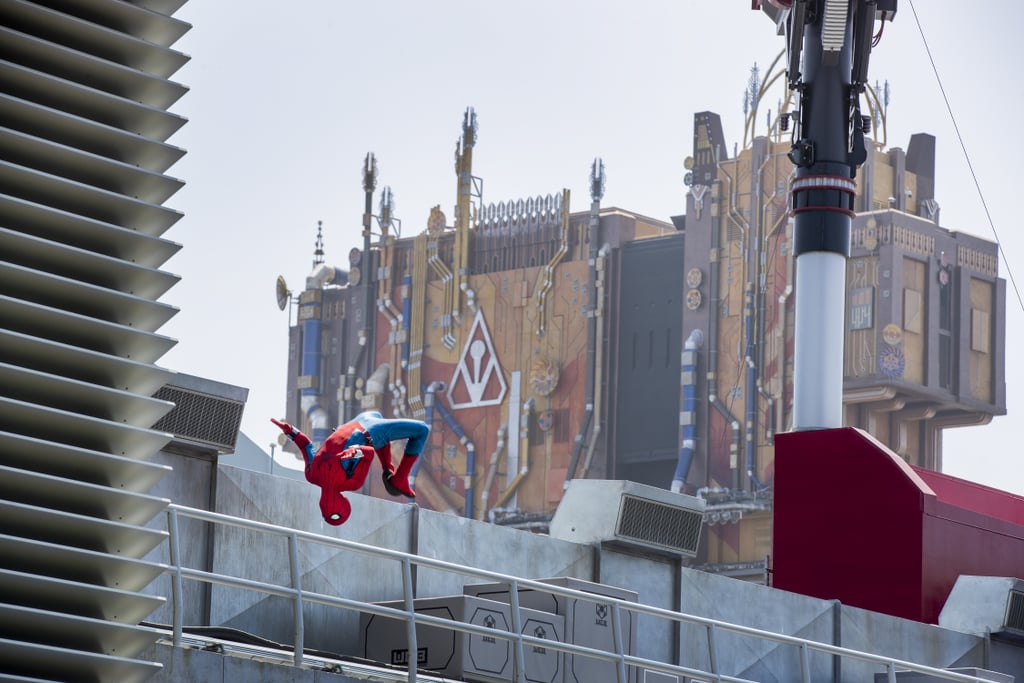 The Avengers Campus at Disney California Adventure Park is finally opening to the public on June 4, and we already got our first glimpse at one of the new land's coolest features: the animatronic Spider-Man. During a media preview event earlier this week, Disneyland unveiled an incredibly high-tech and hyperrealistic Spider-Man robot that soars more than 50 feet above the Web Slingers: A Spider-Man Adventure attraction, and it's truly nuts to watch. The stunt-double animatronic — or struntronic, for short — hurdles through the air completely untethered and does a flip before safely landing on a hidden net. (You can learn more about the science behind the futuristic flying robot here, if you so please.)

Now, it's worth mentioning that not every Spider-Man figure you see at the Avengers Campus is animatronic. Both before and after the robot's big flip takes place, a person wearing the same exact Spidey costume does a few stunts outside of the Web Slingers ride and comes down to ground level to greet park visitors. That one is, in fact, a real, breathing human and not the same hunk of superhero metal flipping through the skies. Read ahead to see photos and videos of both Spider-Man figures in action to satisfy your curiosity until you can make a voyage to the Avengers Campus IRL.

Related:
Here Are All the Dishes and Drinks You Can Get Your Hands on at Disney's Avengers Campus
Previous Next Start Slideshow
DisneySpider-ManDisneylandAvengers Campus