Jason Derulo is a dad, and his newborn son has one very cute thing in common with his papa: his name! Jason and girlfriend Jena Frumes announced the birth of their baby boy on May 18, Jena with an Instagram photo of her holding baby's hands and Jason with a video of the events of baby's May 8 birth and a caption sharing his full name, Jason King Derulo.

Aside from it being a matching first name with his dad, Jason — which has Greek origins and means "to heal" — has been in the top 1,000 baby names for boys since the Social Security Administration (SSA) began collecting name data in 1900. Most recently, it was the 119th most popular name for boys in 2020. Jason also had a brief stint in the top 1,000 as a girl's name, debuting in 1971 as 869th most popular and dropping off after ranking 968th in 1986. 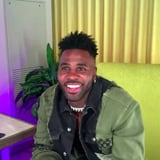 Jason Derulo Is Expecting a Baby and a Backup Dancer: "I Just Picture Him in There Just Getting It"

Congratulations to Jason and Jena on their sweet baby boy's arrival!

Related:
Naomi Campbell Is a Mom! Everything We Know About Her Baby Girl So Far