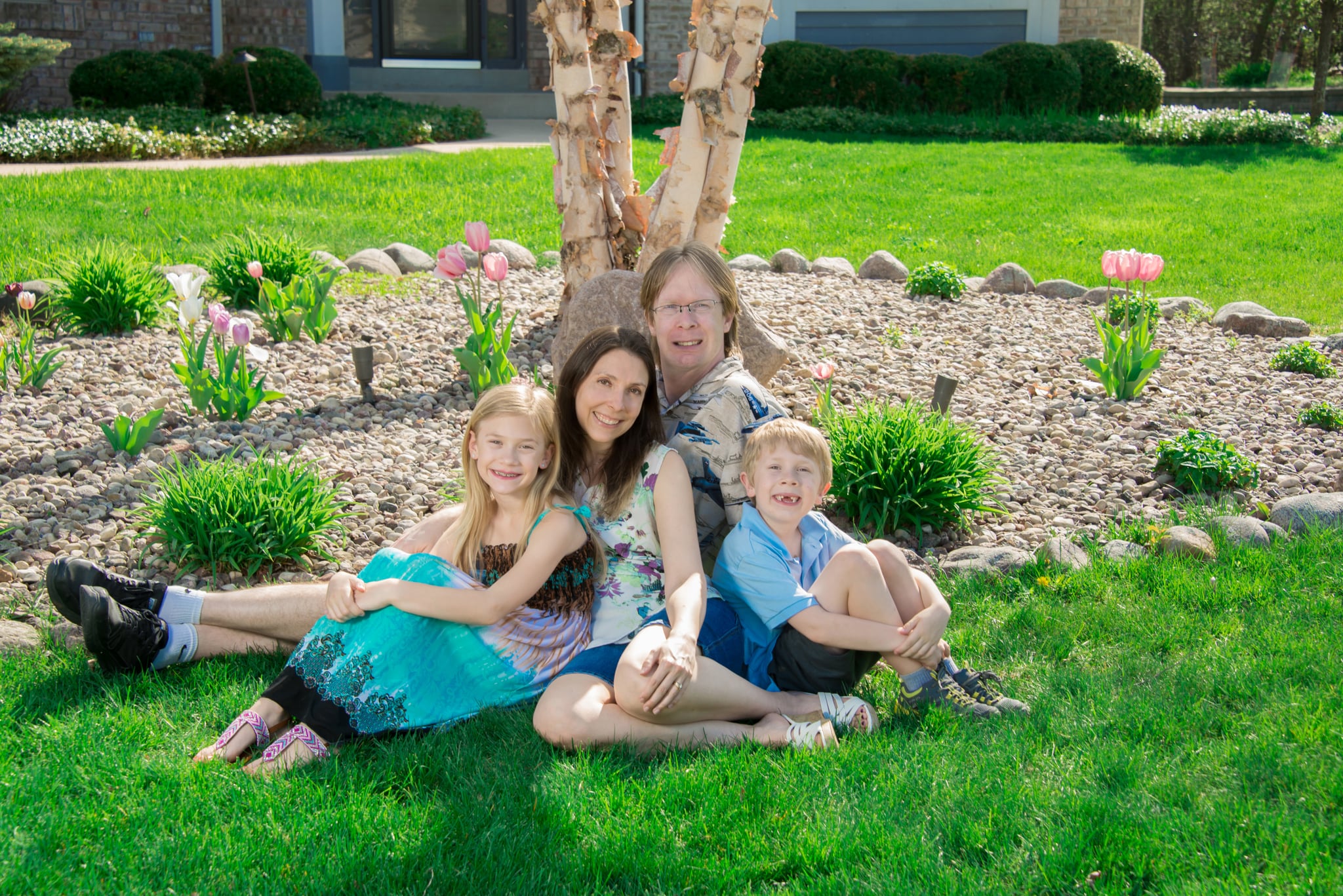 Diagnosed with epilepsy at the age of 6, motivational speaker Michelle Anderson never wanted children when she was younger. However, after she met her husband, Erik, in college, her outlook drastically changed. Now a mom to her 9-year-old daughter, Kadence, and a 7-year-old son, Kemuel, Michelle is sharing what motherhood with epilepsy is like and how her diagnosis has helped her family cultivate resilience.

"I had never babysat for other people's kids just because of my diagnosis. I was afraid, and I didn't want kids," she explained, noting that she never thought being a mom was within reach for her. "I told Erik straight out, 'I don't want children.'"

Related:
My Son Is Adopted, and Yes, I Am His Real Mother

However, when she went to Erik's house one day, her perception completely changed. "I saw this picture on his mother's fridge of him running around outside when he was about 5. And I said, 'Oh my goodness. I want one of those.' That's what changed my mind when I was really in love. I thought, 'I won't be doing this alone. I have a wonderful man, who's my best friend in the world. And we're going to do that together.' It just didn't seem possible to not want to share that."

Michelle went on to have two beautiful children. Although her diagnosis certainly doesn't define who she is as a parent, she has worried about having seizures around her kids. She recalls one particular day when she felt a seizure coming on. While she couldn't prevent it from happening, she learned that it was OK for her son to witness what was happening.

"I just remember setting him on the floor and just saying, 'OK, it's not in my hands. God's going to have to take this one.'"

"There was a time that I remember I knew I was going to have a seizure and I was holding my son," she explained. "He was probably just a couple months old and I just remember setting him on the floor and just saying, 'OK, it's not in my hands. God's going to have to take this one. I'm not going to be here much longer.' And he was fine."

Before her children were born, Michelle was concerned that they would have epilepsy. As someone who has seizures every six to eight weeks, she's aware that the condition can take a toll on people mentally.

"Those are always thoughts that go through your head," she explained. "You're on medication, you wonder what's going to affect your child. Could they possibly have epilepsy as well? My daughter had ended up having a couple of seizures when she was very young, but she hasn't in many years. So, of course, that was just about the scariest thing you can imagine for a parent who's gone through that."

Related:
My Daughter Had a Seizure, and Here's What I Learned

Although Michelle generally has a sunny outlook on life, a recent seizure gave her family a reality check. Often triggered by stress, Michelle was impressed that she had gone more than two-and-a-half months without a seizure. However, while her kids were out with her husband one afternoon, she collapsed.

"I stayed in at my office and they were maybe gone for 10 minutes, and my husband came back in and found me fallen on the floor. It was worse than usual," she said. "There was blood on the floor, I had somehow cut my ear very badly. We don't even know exactly what happened but my husband had called over to the neighbors and said, 'Honey, we got to take you to the emergency room.' And I said, 'Nope, we're not going anywhere. Nobody's watching my kids. Don't you tell me that, I am just fine.'"

While Michelle is determined to keep up a strong front for her kids, she quickly realized she needed medical attention. "It took me about 15 minutes to realize, I got up to the mirror and said, 'OK, my ear is hanging off of my head. I guess that's not going to work on its own.' It was very much a reality check for all of us."

"When a family experiences some kind of trauma on a regular basis while they are young, they develop a formula for survival."

Of course, for Erik, it was a particularly terrifying situation. "My husband said it was one of the few times where he felt like he couldn't fix things," Michelle explained. "He didn't know what the best way was to be there for me, and he didn't know if I was going to make it. He really thought he may lose me when he saw me on the floor."

For Michelle and Erik, maintaining a strong marriage has been the key to the couple's success. However, when Michelle was struggling with epilepsy three years ago, she questioned whether or not staying married was in Erik's best interest.

"I told him, 'You just go ahead. You take the kids, I'll move in with my parents. You find somebody who doesn't have this problem. And I will be fine,'" she said through tears. "He took one look at me and he said, 'How dare you hurt me in that way? That you would even assume I could consider something like that, because I knew what I was getting into when I signed on for this and I'm not going anywhere.'"

At that moment, Michelle knew she and Erik were going to get through it. "It was almost more of a selfish thing, and he has asked me never to bring that up as an option again," she said. "It just made me realize, 'OK, we're in this for the long haul.'"

Although Michelle knows this was a particularly dark moment in her life, the emotional struggle made her a stronger parent. "We allow our kids to see how Mommy and Daddy are close," said Michelle. "Even when bad things like this happen and they see us stay so close and positive, it will empower them to be able to get through those situations."

As a mom, Michelle's primary focus has been ensuring that Kadence, in particular, doesn't feel the need to take care of her. While she may require help from Erik from time to time, she doesn't want her condition to affect her kids.

"I never wanted my kids to believe life was going to be perfect because it's not, that's a big lie."

"I am a big believer in birth order having an effect on things, it's just the way it is," said Michelle. "I have to remind my daughter that she's not the mommy when I get sick. She can be there, she can love me through this, but she does not have to take over. She shouldn't feel that kind of burden. I give her as much of an opportunity as I can to emphasize how important it is to still be a kid. Daddy is the one who can step in and be there. A huge lesson that I see in this for them is, my husband and I have chosen to see this as an opportunity to grow closer when I have a seizure."

Despite it all, Michelle believes that having epilepsy has had a positive effect on her children — they're both independent and in touch with the fact that sometimes life simply isn't perfect.

"What I never wanted to do was shelter my kids," said Michelle matter-of-factly. "To a point, you give them a padded environment and gradually take that out. But I never wanted my kids to believe life was going to be perfect because it's not, that's a big lie. Truly, it was a lesson I learned from one of my mentors growing up. She had a mother who was blind and she told me, 'Michelle, you've got to look at this like they don't know any different. They didn't grow up in one environment without a mom who had epilepsy and then have that change. It's all they've known.'"

"I thought this is so amazing to have that wisdom in my life to realize that's right. I don't have to make a comparison here," she shared. "I'm their mommy. So it was incredibly empowering to think I have something to give them. And I shouldn't be looking at this as a comparison at all."

Related:
Mom Makes a Life Update Video For Friends but Holds Up Written Signs That Spill the Actual Tea

Equipped with the support of her family, Michelle has completely shed the guilt she once had about having epilepsy. In fact, she believes her diagnosis may help her children in the long-run.

"When a family experiences some kind of trauma on a regular basis while they are young, they develop a formula for survival. I believe they will either unite or fail," she said. "As a result of dealing with my seizures, I see that my family knows how to unite in any kind of difficulty. They have a deeper connection together even more than they would have without my epilepsy. That connection will guide them through and equip them for every phase of life they live. They will never be alone and they know it."