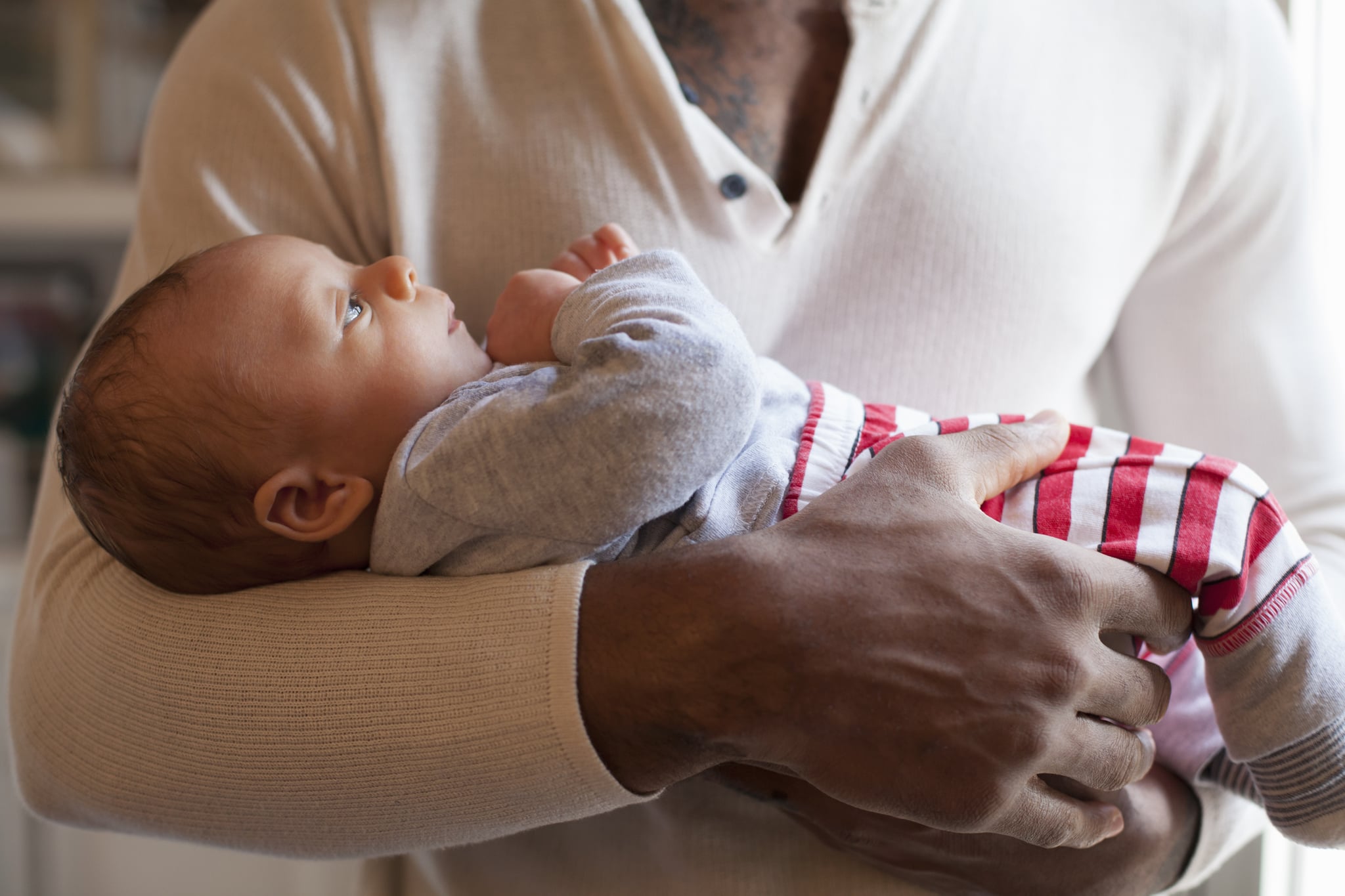 I curled over the edge of my bed, my palms clasping my knees to my chest. My legs were tangled in a wad of bedsheets. The percussive, rhythmic stomping of my husband's feet blended with the gut-wrenching shrill of my baby's cry, filling the upstairs hallway, spilling down the stairs and into every room. Aside from the glow of a single lamp at my bedside, the entire house was dark. The air was thick with exhaustion and gloom.

Please, please, let this be the grand finale of the night, I whispered to myself, tensing every muscle in my body. It had been a day for the books — seven continuous hours of red-faced, arched-back, full-body screaming. My husband and I were dangerously close to losing our minds.

Almost two months prior, I'd given birth to an impossibly gorgeous, radiant baby girl. She was an angel born with raven hair, luscious raspberry lips, and the creamiest, most otherworldly complexion imaginable. All of the nurses spent our entire hospital stay gushing about how delicious and calm-natured she was. And even in the earliest days and weeks at home, operating on love instead of sleep while struggling to master breastfeeding, every waking hour spent with her (which was the majority of my hours) was dreamlike. I'd stare down at her face while she slept peacefully in my arms, and my tears of joy would collect on the piles of burp cloths and blankets. I'd been dropped into the arms of an unending bliss.

That was our story until sometime around week three when the dreadful entity found us and began siphoning all of our joy — the one our pediatrician would eventually diagnose as colic. It began one morning when I noticed a curious scowl. I thought maybe it was some intestinal gas that she was trying to work out. But then she slept less than usual that day, as though she were awakening from the comfort of my womb and entering the cold, dry world. She seemed grumpy, though nothing too worrisome. But in the days that followed, her sourness rapidly advanced into an absolute revel of misery — as though her body were in total revolt. It was breaking my heart.

Related:
You're Not a Bad Mom — the First Month of Motherhood Is Just Really, Really Hard

Every day thereafter, my sense of joy grew dimmer. It was a rare and specific kind of torture — to love my baby so indescribably much while watching her writhe in agony for hours on end — never being able to communicate what she needed. She was being terrorized by something, I was certain, and I felt guilty for not being able to figure out its cause. Wasn't that my job? Where was my mother's intuition when I tried to summon it? What was colic, anyway? An elusive monster, colic is defined by medical professionals as "crying for more than three hours a day, for more than three days a week, for at least three weeks." My baby more than fit that description, and it was a puzzle I spent every waking hour feeling possessed to solve. It was but a phantom covering a multitude of symptoms, offering no concise, step-by-step cause or solution for its remedy. Still, I had to be her advocate. I would have died trying to give her a mere semblance of comfort.

Because I was breastfeeding, I eliminated dietary triggers like dairy, onions, and fruits and vegetables that encouraged bloat. I pored over medical studies, product reviews, message boards, books, unconventional theories, and YouTube videos. By day, my husband and I drove to our pediatrician and begged for answers, shouting our concerns and questions over the unceasing screams. We pumped our baby full of gas drops, gripe water, and probiotics, and I drank cups of tea that promised to turn my milk into a magical elixir (but subsequently did not). By night, we burped her, and bounced her, and rocked her in every position under the moon. Sometimes we even galloped alongside a running vacuum cleaner. It was madness. My mind was never at rest — practically chanting, praying and visualizing for the terrorizing screams to end. But nothing. Absolutely nothing worked.

On one especially horrendous night, our 6-year-old long-haired dachshund, Lucy, backed herself into a corner of our living room and began cutting her gaze from my husband to me, as though exclaiming, "You idiots! What the hell have you guys done with our perfectly quiet life? Why did you fools have to go and destroy it!"

The entire conundrum was an acid test to my marriage as well. My husband and I didn't agree on the other's approach, and we sometimes misdirected our stress — projecting it onto each other. "There is nothing we can do about this hell other than to just get through it! Stop obsessing!" he once shouted at me out of nowhere while I scrolled through a message board. "Well, I'll keep searching for ways to help her until this ends! How sad that you refuse to do that!" I snapped back, enraged. We'd sulk and walk away to catch a breather, then apologize and lean on each other once again, vowing to survive the torment together no matter what. Because we needed each other. Our entire household was a disaster zone — each of us fragile little things tumbling wildly in the windstorm of colic's fury, never knowing if and when calm days would find us again.

I remained persistent for answers, allowing my mind to wander to far-fetched possibilities. Was she seeing spirits? Was she born too soon? Did she hate me? Some other moms advised, "Babies can feel all of your stress and worry, so you need to keep that in mind." Oh, OK. Awesome. So maybe it was my fault after all.

Related:
Take It From Someone Who's Been There — the Newborn Phase Really Is the Hardest

There were also those who occasionally reached out to ask if we were still in the thick of it. I'd unpack the defeating madness of what we were experiencing, and most of them would offer immense encouragement. But there were others who chuckled deviously, saying, "Oh. You just wait. It gets worse. Talk to me when you hit the toddler years." Really? Comments like those threatened to make a Regina George out of me. This wasn't a case of being maladjusted to new parenthood; we were living in times of insanity.

I'd steal moments of respite in a steaming shower, but even then I'd find myself taking a slow, anxious breath and fumbling to turn off the water — because the effects of colic were literally hissing in the corners of my psyche; I could hear her screaming from inside of my brain. I feared the madness would stretch on forever. Until one day when everything changed.

As quickly as it had appeared, it took its final bow. It was almost 8 p.m. that night when my husband and I looked at each other and realized she had hardly cried. The following morning, when I leaned over her bassinet, instead of being greeted with a scowl, I was met with a gummy grin. In the days that followed, there were short bouts of fussiness, but mostly a delightful personality that was slowly emerging. Sweet babbles, loving coos, and a playful twinkle in her eyes. We were cautious to celebrate, but couldn't deny what we were witnessing: the angry gremlin was gone, and our angel had returned. I'd pop her on my hip and dance in front of the bathroom mirror, and she'd shriek with glee. She'd beam up at me from the changing table when I cleaned the foulest of diapers. I couldn't believe it.

What had finally brought the nightmare to a close? Was it the elimination of the vitamin drops we had been giving her? Had she developed a tolerance for my breast milk? Or, had my mommy powers finally willed the evil entity into its expiration? I couldn't be sure. Even now, with a bouncy, joyful 7-month-old and almost four months removed from colic's grip, I'm still not. And, while those unrelenting episodes of crying seem like a blur of a lifetime ago, I occasionally find myself taking a slow, anxious breath before fumbling to turn off the shower faucet. Just to make sure.