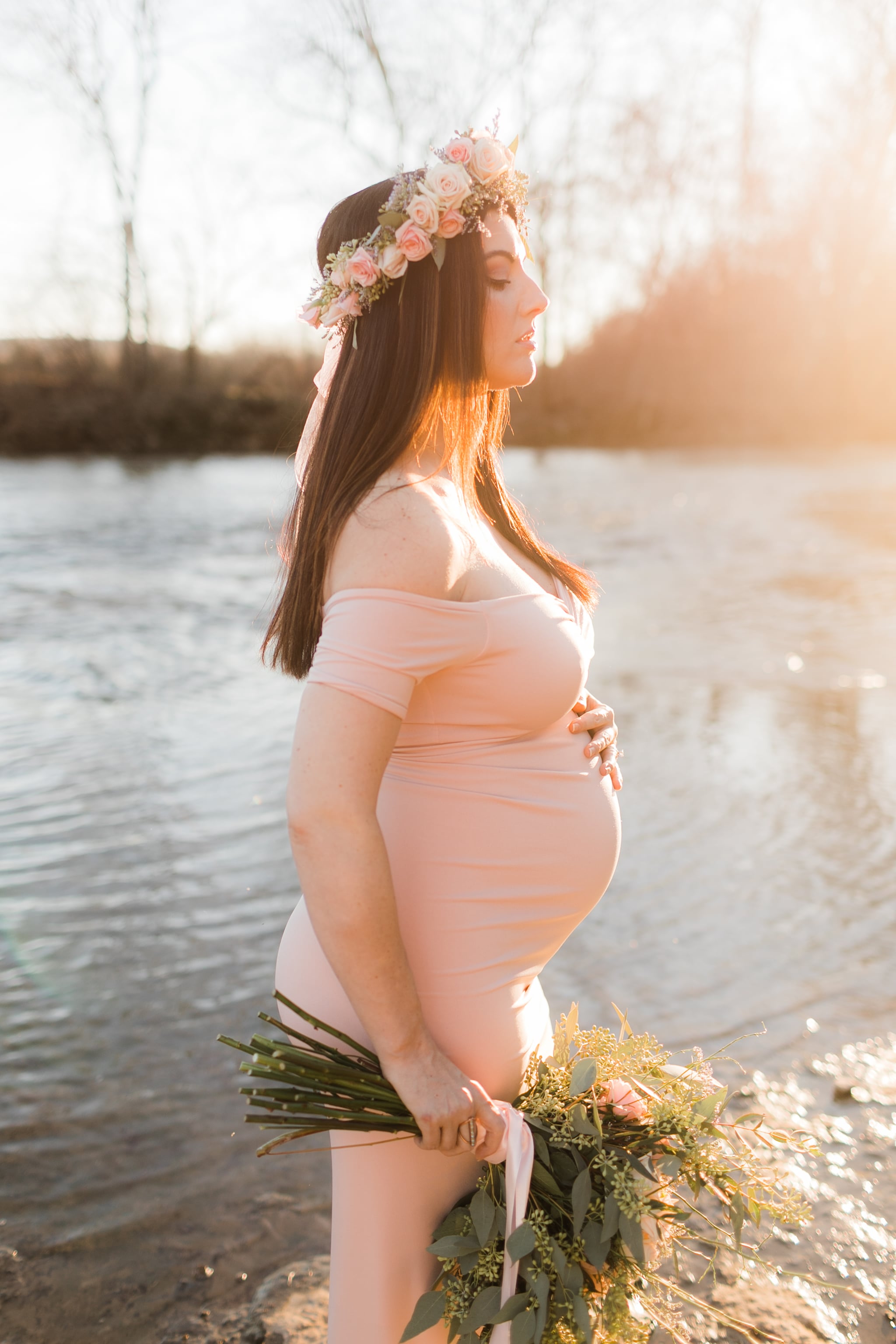 The clock was ticking. The grand finale was nearing. As my belly expanded, so did my list of uncertainties. I stood before my bathroom mirror in the vivid morning light, 38 weeks pregnant, and finding breathing strenuous. I was waddling my way through life, devouring platters of dark chocolate and cheeses as though they were going to redeem me for my every bad deed, and running out of appropriate clothes to wear in public. I was also beginning to think it wouldn't hurt my feelings if time slowed down a bit.

"We're in the final stretch," my husband joked the evening prior, collapsing onto the sofa and taking a sip of his beer. "It's like the astronaut's last party before he is off to the moon!" Hours later, I awoke around 3 a.m., something I had begun to do as of late, staring into the darkness, hoping it would commiserate with me. A tinge of fear swelled inside of me, and I began to dance with the idea that giving birth was something I was sharply unprepared to do.

But life, as it often does when one becomes too self-assured, had thrown me a plot twist. I was suddenly nervous as hell.

I hadn't always held such a spirit of reservation. Once the spell of nausea and the plague of flu-like symptoms vanished at the end of my first trimester, I'd found it easy to embrace pregnancy with a lightness of ease and moxie. I'd playfully sipped mocktails on a rooftop bar at a swanky hotel in Beverly Hills, meandered through Times Square wearing red lipstick, a cropped leather jacket and a fitted, sparkly dress, and proudly displayed my bump in a cluster of professional settings. When asked, I boldly declared that I had grown unaffected by the cautionary pregnancy tales hurled in my direction, and felt no atmosphere of dread about the birthing process. It had taken me four years to conceive, and I'd been looking forward to crossing through that rite of passage since the moment I held a positive pregnancy test in my hand. But life, as it often does when one becomes too self-assured, had thrown me a plot twist. I was suddenly nervous as hell.

Related:
I Didn't Realize I Needed Help With My Anxiety Until It Consumed Me After I Gave Birth

As the days shuffled by, I sensed my baby's presence speeding toward me — rumbling and amplifying in distinction. It felt as though I were bracing myself for a debut performance of a lifetime — rehearsing my lines, tapping the mic, sweating nervously as I prepared for the curtain to inevitably part. But no amount of "You've got this, Mama!" in thoughtful text messages or on social media comments served to calm my stage fright.

Throughout each day, I was drawn like a magnet to the mirror, never knowing if it were the final hour that my baby and I would be so physically intertwined. I'd examine the evidence of how my body had transformed itself in order to make way for her life to grow. How my hips and back had expanded, how my breasts had changed in preparation to feed her. For nine months, I had been her universe, her protector, and her life force. Yet I could not anchor the confidence in my ability to birth her safely. I was afraid the pain would triumph over me, that I'd tear or break something, that my instincts would fail me when it was time to push.

"But remember that women throughout your ancestry have already done this successfully, so think about that when you feel afraid."

Less than a week before my due date, upon arriving at a prenatal acupuncture appointment, my therapist guided me down a dark hallway and through a wooden door, then pointed to a corner where a plush blue recliner rested in waiting. "This is the cozy spot where I always treat my moms who are nearing labor," she said, grabbing a blanket and a pillow for my lower back. As she applied the needles to strategic points across my body, she asked, "How are you feeling this week?" "I've started having some mild contractions, and my whole cool, calm, and collected vibe decided to abandon me," I told her, shrugging. "All of the sudden, I'm scared." She smiled knowingly, as though scrolling back a few decades and fondly revisiting her own entrance into motherhood. "I remember feeling like that," she said, placing the final needle near my toe. "But remember that women throughout your ancestry have already done this successfully, so think about that when you feel afraid."

I spent the following hour meditating on those words. Lying there, saturated in the stillness, I felt lightyears away from that room. My mind reached back in time, taking a tour of my family history, collecting a list of names. I thought about all of the women in previous generations who inspired me in some way — particularly those who infused me with a sense of grit and prowess.

Related:
My Birth Plan Didn't Go as Expected, and I'm Better For It

Some would be nearby in the hospital's waiting room once labor found me, and some would be filling my phone with loving wishes from miles away. Yet I felt equally drawn to those who had passed on. There was my great-grandmother, Nellie, who gave birth to 10 children and lived to be 100 years old. There was my other great-grandmother, Bonnie, who birthed six children and remained fiery and unstoppable well into her eighties — dancing in our living room at Christmas, proudly showing off her flaming magenta hair. And there was my mother, diagnosed with diabetes at 19 years old, who had given the fight of her lifetime to sustain her pregnancy with me. When her doctor told her I would never be born, she responded with an unwavering confidence, proclaiming, "I will have this baby!" Although she had died in a tragic accident when I was 6 years old, I knew that if she had been able to conjure such potent level of determination and will a healthy baby to herself (despite the physical odds stacked against her), that same breed of tenacity was alive and well in me. I could activate it in her honor.

Four days later, my husband and I were lugging our bags through the hospital, being guided to our labor and delivery room. Once I'd been checked in, met my nurses and changed into my gown, stillness blanketed our room. My husband drifted to sleep on a couch nearby. The shades were drawn to block out the city lights and the space became mostly dark — lit only by the glow of my contraction monitor and a sliver of light from under the door. I shut my eyes and decided to invite the spirits of my family members inside.

Related:
My Anxiety Got Worse During My First Pregnancy — Here's How I Managed It For Baby No. 2

I knew that their strength and resilience lived on in my biology, and I channeled that insight into an empowering tool.

I visualized them encircling my bed, beaming supportively with knowing gazes — as though they had already been given a preview of my baby's enchanted arrival. As though they were eagerly waiting to pass me the motherhood torch, and induct me into their sacred tribe of warriors. I felt their unconditional faith and love, their high-fives, their affirming cheers resounding throughout the cosmos — across galaxies and planets and stars and sky, as though they were guarding my baby's soul until she landed earth-side. Whether or not their presence was true in a literal sense didn't matter. I knew that their strength and resilience lived on in my biology, and I channeled that insight into an empowering tool for my intersection between pregnancy and motherhood. It helped me find my zen, while infusing me with courage and significance.

The following evening, with my husband by my side, I crossed through the realm of labor and into motherhood, after more than a sweaty hour of pushing. "Earth Angel" poured from the speaker on a nearby table, filling the room, blending majestically with the sound of my baby girl's first cry. Once the nurse confirmed that she was stable, swaddled her, and placed her in my arms, I stared into her face — euphorically awed, exhausted, and deliriously smitten, yet eerily calm. Also whirring with a sense of honor to have been inducted into the sacred tribe of warriors who had made it possible for me.