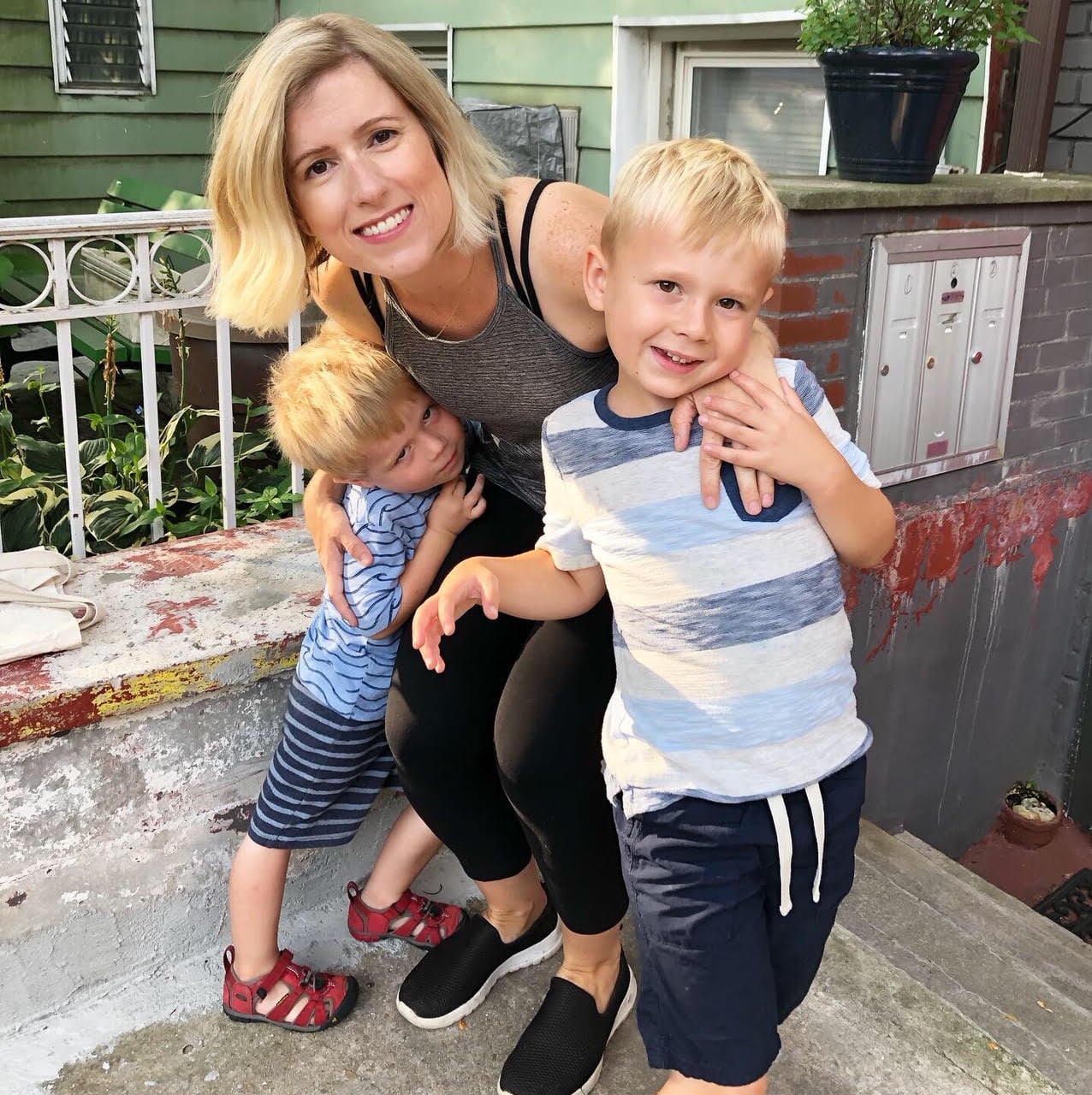 It's a parenting technique as ubiquitous as tip-toeing out of a nursery room after the baby finally closes his eyes. It's a maneuver as universally frustrating as stepping barefoot on an errant Lego brick. You're driving with your kids strapped into the car seat behind you, and they drop something — either their pacifier or a sippy cup or a toy. To keep them from fussing, you reach your arm back awkwardly to pick it up.

But unlike other common parenting scenarios, this one is dangerous.

Lindsay Powers, a working mom of two and the author of the soon-to-be-published book You Can't F*ck Up Your Kids, didn't realize just how hazardous such a typical part of her day-to-day life could be.

"Drives with my kids can be stressful," she told POPSUGAR. "They have a million demands. They are constantly asking for snacks and toys and dropping things. And I used to be quick to grab those things to keep the peace. With a 3-year-old and 5-year-old, everything escalates quickly!"

But in November 2017, she reached into the back seat of her Honda C-RV to grab some toy for one of her children and "instantly felt a pop." She thought it was just a weird shoulder strain, but it only got worse from there.

"I had no idea this could happen . . . There is nothing wrong with refusing to contort yourself to pick up your kid's Legos from the back seat of the car."

"It started as a dull pain, but by the Spring, I couldn't pick up a gallon of milk anymore," she said. "I knew I had to do something because it was interfering with my day-to-day life. But you know how mom life is . . . you put things off forever because the to-do list never ends, and we usually don't prioritize our own needs. I figured it would just go away, and it didn't."

After cortisone shots proved to offer only temporary relief, an MRI revealed that Lindsay had, in fact, torn her rotator cuff and her labrum. Her doctor recommended physical therapy. She spent five months doing her "at-home" exercises religiously, but just a few weeks after being discharged, "the pain had come roaring back," she said. She repeated more rounds of PT only to have the same blinding pain return. 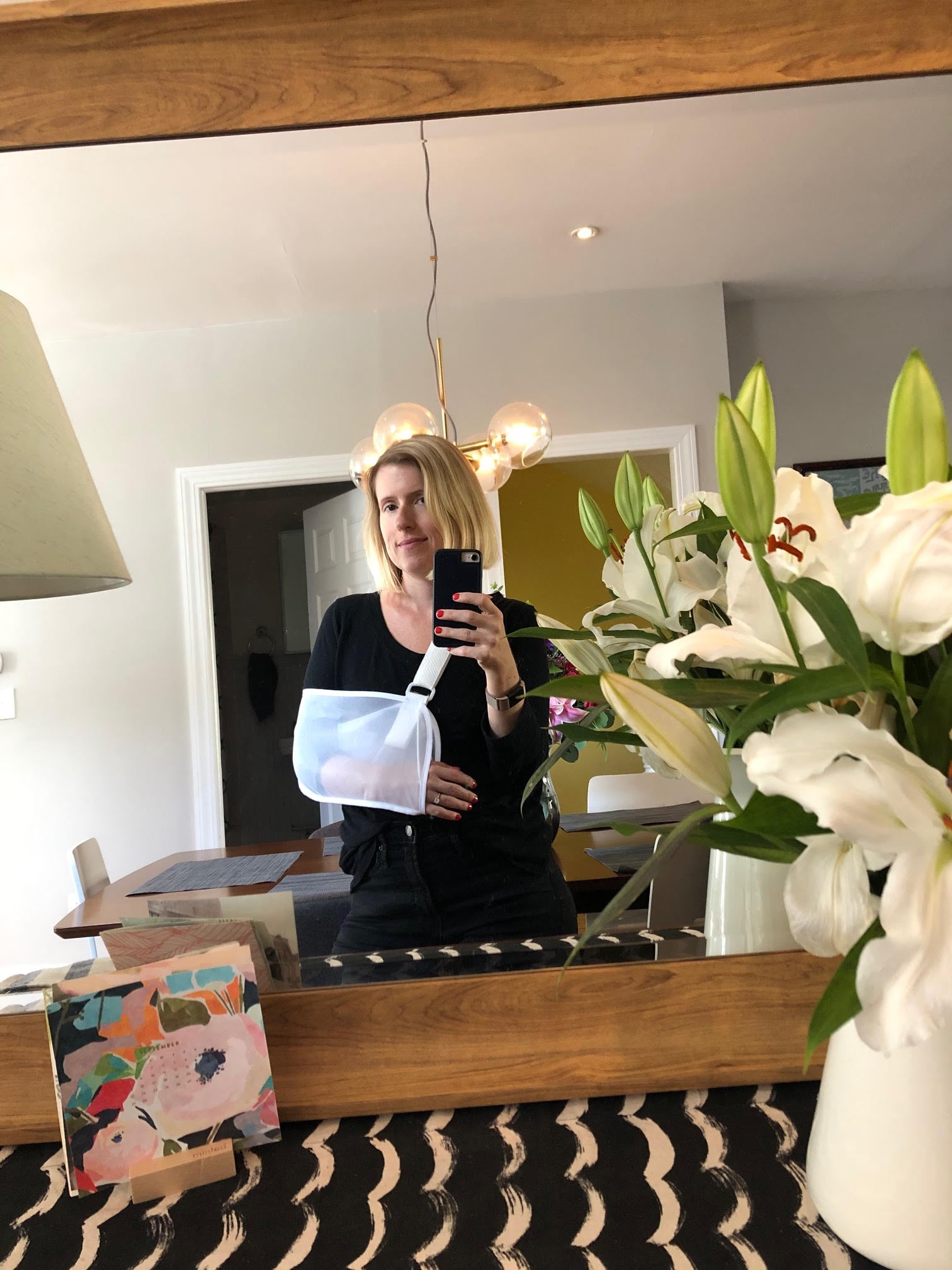 Eventually, her doctors suggested plan B: shoulder surgery. The only thing it guaranteed was an arduous recovery — "six weeks in a sling without being able to pick up anything heavier than a coffee cup, followed by six months of twice-weekly physical therapy." She'd avoided it because "I had no idea how my husband and I would manage" with balancing work and their two boys. But once she "had to move my watch to my other wrist because I stopped being able to swing my arm around to see the time," she knew it was time.

Related:
If You Go Down the Playground Slide With Your Kid, You Need to Stop Right Now

This past month, almost two years since she reached back for that toy on the floor of her car, she went in for surgery. She's still in recovery, but hopeful . . . and determined to never let another parent make the same mistake she did.

"I had no idea this could happen," she told POPSUGAR. "One physical therapist I spoke to said there's 'no way' I could have torn my rotator cuff reaching to the back of the car, but my second PT said the reach could have been the straw that broke the camel's back on an already stressed shoulder, which wouldn't surprise me given how much time I've spent lugging giant strollers and toting around my kids. The PT told me he sees at least three people a year with shoulder injuries from pushing strollers."

Now — having "spent thousands of dollars and untold time trying to fix my shoulder, not to mention every single game of soccer and park time I've had to sit out with my kids" — she reminds friends all the time and will "scream at my husband every time he reaches back in the car awkwardly."

As for what she says to her kids when they complain after dropping something? "I tell my sons that I'm not picking up anything until the car stops and I can physically turn my entire body around, or — better yet — open the back door and reach in easily."

If they complain, they can deal.

To Lindsay, it's a simple trade-off: "There is nothing wrong with refusing to contort yourself to pick up your kid's Legos from the backseat of the car. There is literally no way we can do it all, and this has been a physical reminder of that."