Kylie Jenner has seriously cut down her makeup routine since becoming a busy mom to Stormi Webster. In a video posted to her YouTube channel, "My Everyday Makeup Look," the 22-year-old mom of one demonstrates her updated daily makeup routine since welcoming Stormi — it's admittedly still much more in-depth than my childless everyday makeup routine, but she's Kylie, so that's expected! — and shares her thoughts on letting her 20-month-old daughter wear makeup in the future.

"Stormi is actually super into makeup right now, it is amazing," Kylie says as she applies her makeup in the video. "Every time I'm wearing lipstick, she notices and is like, 'Lip, lip, lip!'" She adds later: "I haven't even thought about when I'm gonna let Stormi wear makeup, I don't know, I'm just going to see. She might not even want to wear makeup, honestly, but how things are going though, this girl is obsessed with makeup. She begs me at this point."

With a makeup guru mama like Kylie, we can already see Stormi being better at applying makeup than most of us in no time at all! 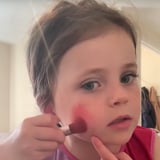