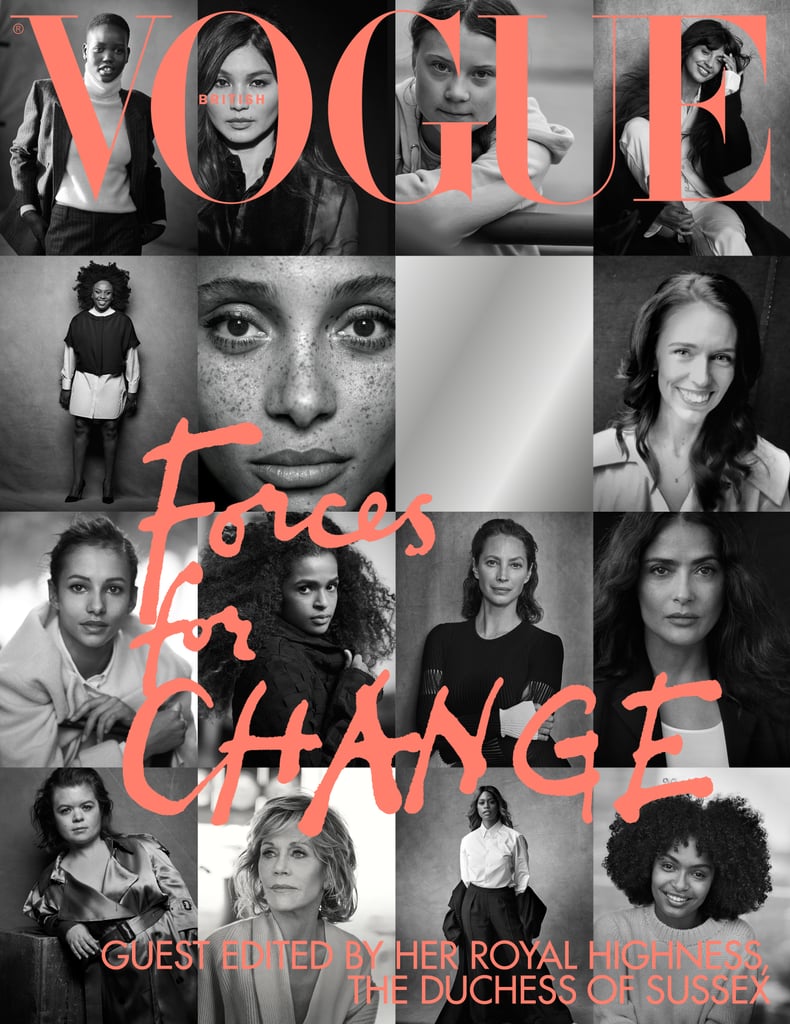 When we heard that Meghan Markle was set to guest edit an issue of British Vogue, we knew that she would not settle for just sitting in on a few fashion shoots and sharing what's in her handbag. Instead, the Duchess of Sussex has collaborated with the magazine's Editor in Chief Edward Enninful on a special September issue titled "Forces For Change," which celebrates "15 world-leading women who are reshaping public life for global good," each one personally chosen by the duchess. She describes the cover as a "diverse portraiture of women of varying age, color, creed, nationality and life experience, and of unquestionable inspiration."

In her editor's letter, Meghan expands on how the collaboration came about, remembering a meeting with Edward in January when they first discussed her potential appearance on the cover of a future issue (you'll remember the Duchess of Cambridge was a British Vogue cover girl in June 2016 when the magazine celebrated its centenary). "Edward . . . instead of doing the cover, would you be open to me guest editing your September issue?" she recalled writing soon after the meeting, though she also confessed, "I typed and deleted the question several times until I built up the courage to ask."

"I discovered someone with a real editor's mind, who knew how to align what she wanted to say with everything we stand for."

Edward jumped at the chance to work with the duchess, and they were soon hard at work, as she discussed, "trying to blend in, to keep up with the pace of these seasoned professionals, and to learn as much as I could as quickly as possible." Though much of the work took place during the later stages of her pregnancy ("a very special time for me personally, on so many levels"), the duchess seemed to have been devoted to her work, and Edward was full of praise in his own editor's letter, saying, "I discovered someone with a real editor's mind, who knew how to align what she wanted to say with everything we stand for here at British Vogue. When I first showed her layouts of how some early features might look . . . Well, she just got it. From ideas and the flatplan, to selecting and commissioning writers and photographers, it was a process she instantly understood."

Related:
15 Eco-Friendly Fashion Brands Meghan Markle Has Been Backing Like a Damn Hero

Not only did Meghan personally choose the activists and change-makers who feature on the magazine's cover, but she also wrote her own pieces, interviewing Michelle Obama, writing an introduction to a poetry piece, and contributing a story about the charity SmartWorks. She even roped in her husband, Prince Harry, who interviewed Dr. Jane Goodall, with whom he has a longstanding history, for the issue.

The duchess described her aim to produce "an issue of both substance and levity," recognizing the particular importance of the September issue within the fashion industry. "Throughout these pages you'll find Commonwealth designers, ethical and sustainable brands, as well as features with designers not about clothes but about heritage, history and heirloom. You'll also find a beauty section that puts its energy towards internal beauty, celebrating the power of breathing and meditation, and a favorite workout that urges you to use your heart as much as your core."

You can read Meghan's full editor's letter in the September issue of British Vogue, available on newsstands and digital download on Friday, Aug. 2. Keep reading to take a peek at the cover and some of the first images from this landmark issue, then find out why there's an empty space on the official cover.

Fashion News
How Major Fashion Brands Are Responding to the Roe v. Wade Ruling
by Charlotte Kho 8 hours ago

Michelle Obama
Michelle Obama Responds to "Horrifying" SCOTUS Decision: "It Must Be a Wake-Up Call"
by Yerin Kim 6 days ago