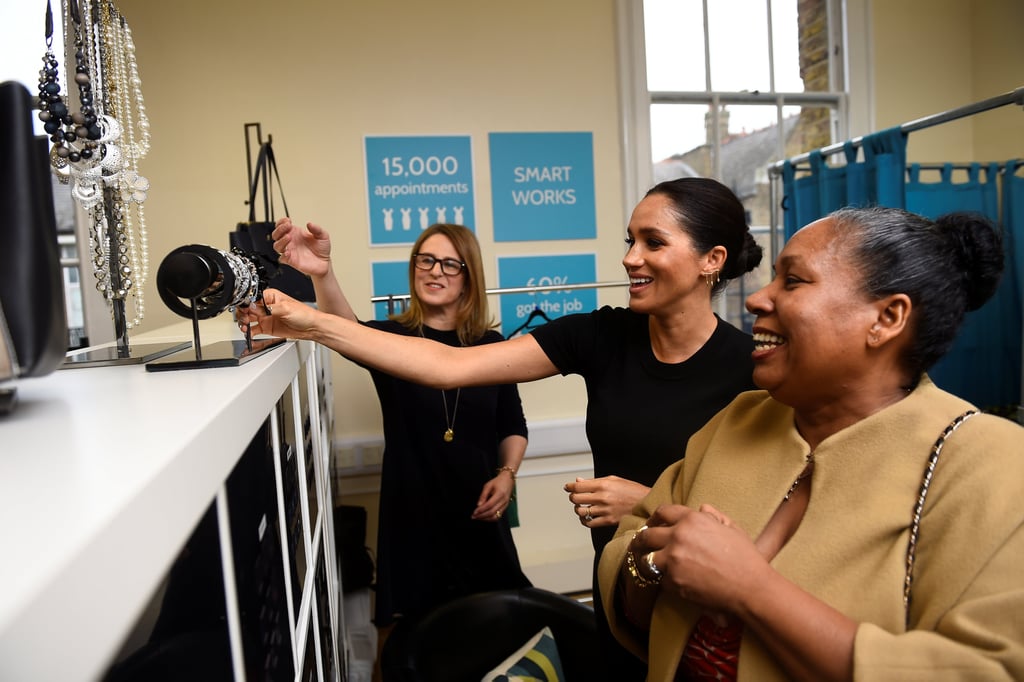 It's no secret that Meghan Markle is a style icon, and thanks to her upcoming workwear collection, women will be able to say they were styled by the Duchess of Sussex herself. Yep, Meghan's maternity leave is officially over, and her first order of business is to help style the women of the UK for the jobs of their dreams. Following her recent stint as a guest editor for the September issue of British Vogue, Meghan has partnered with a few of her friends from the fashion world, including Marks & Spencer, Jigsaw, John Lewis, and Misha Nonoo, to create a line of chic and sophisticated workwear for women in the UK.

Meghan first announced the news of her capsule collection in British Vogue, royal reporter Omid Scobie shared on Twitter. "Not only does this allow us to be part of each other's story, it reminds us we are in it together," Meghan told the magazine, per Omid's tweet. Meghan will formally announce the launch of the collection on Sept. 12, marking her first official work engagement since she gave birth to Archie Harrison, her first child with Prince Harry, on May 6.

"It's not just donating your clothes and seeing where they land, it's really being part of each other's success stories as women."

"When you walk into a Smart Works space you're met with racks of clothing and an array of bags and shoes," Meghan wrote in British Vogue, according to People. "Sometimes, however, it can be a potpourri of mismatched sizes and colors, not always the right stylistic choices or range of sizes." The Duchess of Sussex plans to combat this issue via her currently unnamed workwear collection, which will feature "more classic options for a workwear wardrobe."

Each item will be sold on a "one-for-one basis," which means that for every item of clothing purchased, another will be donated to a woman in need. Back in January, Meghan became the royal patron of Smart Works, a charity focused on helping unemployed women looking to return to the workforce by providing free clothes and interview training. The "one-for-one" system will directly support Smart Works, helping women regain their confidence and secure the jobs they deserve.

During her visit with the charity earlier this year, Meghan said, "It's not just donating your clothes and seeing where they land, it's really being part of each other's success stories as women." Cheers to that, Meghan!

Tinashe
Yes, Tinashe's Basketball Purse Is Cute, but Have You Seen Her Futuristic Platform Boots?
by Victoria Messina 2 days ago