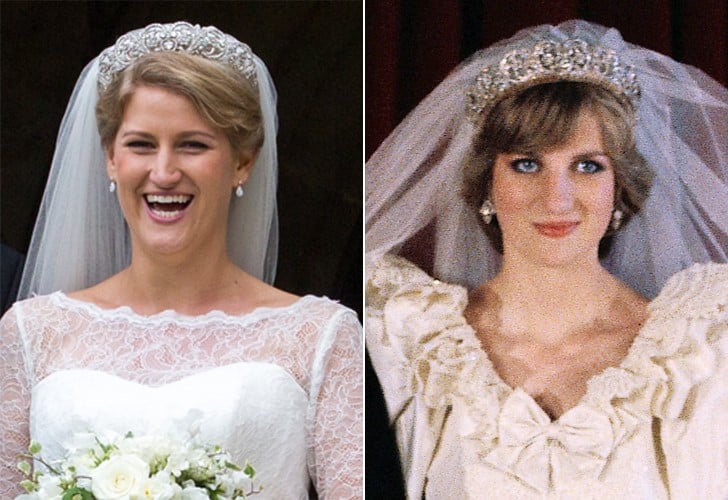 When Princess Diana married Prince Charles in 1981, she completed her bridal look with the Spencer tiara, a piece of jewelry that has since become almost as iconic as her dress. Made from a mishmash of assorted headpieces that the Spencer family had owned, it hadn't been worn since Diana's tragic death in 1997. However, this recently changed when it was borrowed by her niece for her own wedding.

On June 16, Celia McCorquodale — the daughter of Diana's oldest sister — accessorized her lace gown with the stunning piece and pendant pearl earrings for her wedding to George Woodhouse. While the piece had not be used for over 20 years, it wasn't surprising to see it as part of Celia's bridal look: the family heirloom has also been used by Diana's sisters — Lady Sarah and Jane, Baroness Fellowes — on their wedding days, as well as by Victoria Lockwood, the first wife of Diana's brother Charles.

Earlier in the year, it had been thought that the Spencer tiara might be worn by Meghan Markle on her own wedding day. However, the Duchess of Sussex ended up wearing Queen Mary's diamond bandeau tiara, which perfectly complemented her gorgeous Givenchy gown, sparkling jewels, and cathedral-length veil. Ahead, take a look at Celia and Diana wearing the tiara on their wedding days, as well as all the other times it was worn by the Princess of Wales.