Dan Levy delivered with his outfit at the 2021 Critics' Choice Awards red carpet on Sunday night. The actor, who won an award for Schitt's Creek, showed off his dapper suit while posing for photographer Ted Belton ahead of the show. For the award show, rather than a tuxedo, Dan opted for a black-and-white look from Dior by Kim Jones. He actually wasn't the only one who opted for a tailored suit that evening. In fact, the event's suited stars included everyone from Amanda Seyfried wearing a dazzling Miu Miu look to Angela Bassett wearing a sparkly pantsuit.

Levy was styled by Erica Cloud for the Critics' Choice Awards and we love that the actor wore head-to-toe Dior in his favorite color scheme: black and white. If you've watched Schitt's Creek, you'll probably notice that those were the two colors his character gravitated toward on the show. In fact, he owned so many noteworthy sweaters in those colors, it was hard to keep up. For the award show, Dan's Dior look included a pair of leather combat boots and a military-style jacket that came with matching trousers. He accessorized with Cartier jewels. We're sure David Rose would approve. 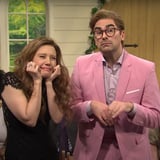