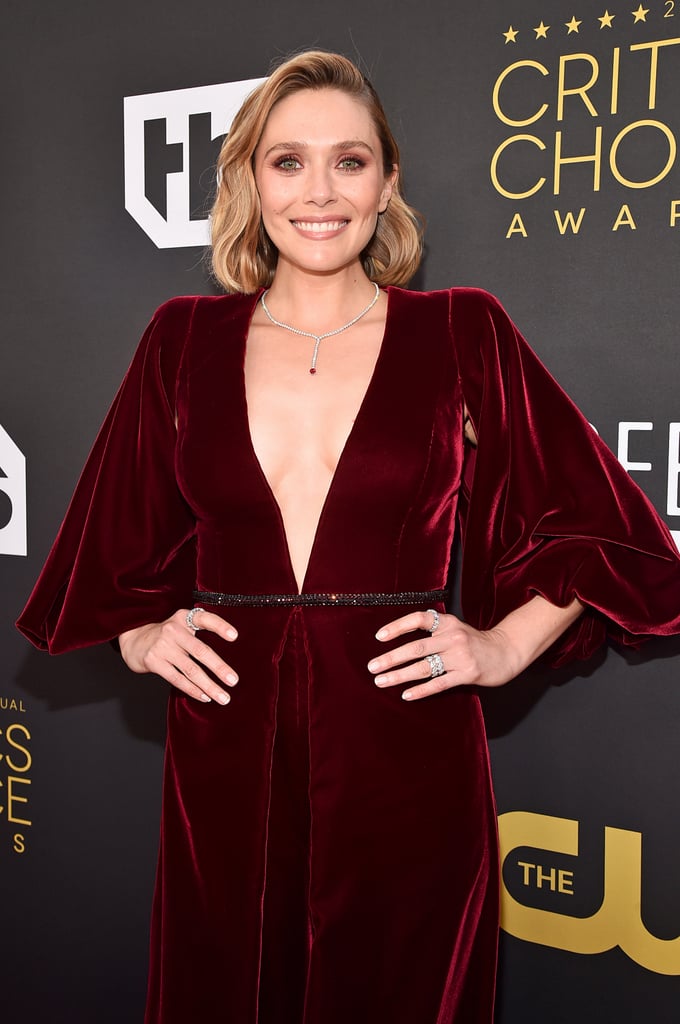 Elizabeth Olsen arrived at the 27th Critics' Choice Awards in a custom-made Giorgio Armani design that resembled a dress at first, but upon closer look, you can see it's actually a jumpsuit. Joining other fashionably dressed celebrities who wore red to the event, the "WandaVision" star donned a burgundy ensemble that featured a plunging neckline and put her sparkly Cartier pendant necklace on full display.

The in-person red carpet showcased the latest and boldest in celebrity style, and Olsen took part in the fun while enjoying her nomination for best actress in a limited series or movie made for television. Working with stylist Elizabeth Stewart, who confirmed the jumpsuit in an Instagram post, the California native opted for wide-leg trousers, which were visible under a parting middle seam that started at the belted waist. Still, you wouldn't be alone in thinking it was a gown as, in some photos, the ensemble could certainly pass for one.

Other stars who donned statement-making looks included Lady Gaga in a yellow Gucci gown with luxury pasties, Venus and Serena Williams matching in dazzling crystal gowns, HoYeon in a Victorian Louis Vuitton lampshade dress, Jodie Turner-Smith making waves in a silk-satin Gucci gown with a flowy train, and Selena Gomez in a custom red Louis Vuitton dress with a matching scarf as a train, hooked by a sparkly ring. The red carpet looks incorporated some of spring's biggest color trends and would make any fan of fashion do a double take.

Read ahead to see Olsen's look in action.