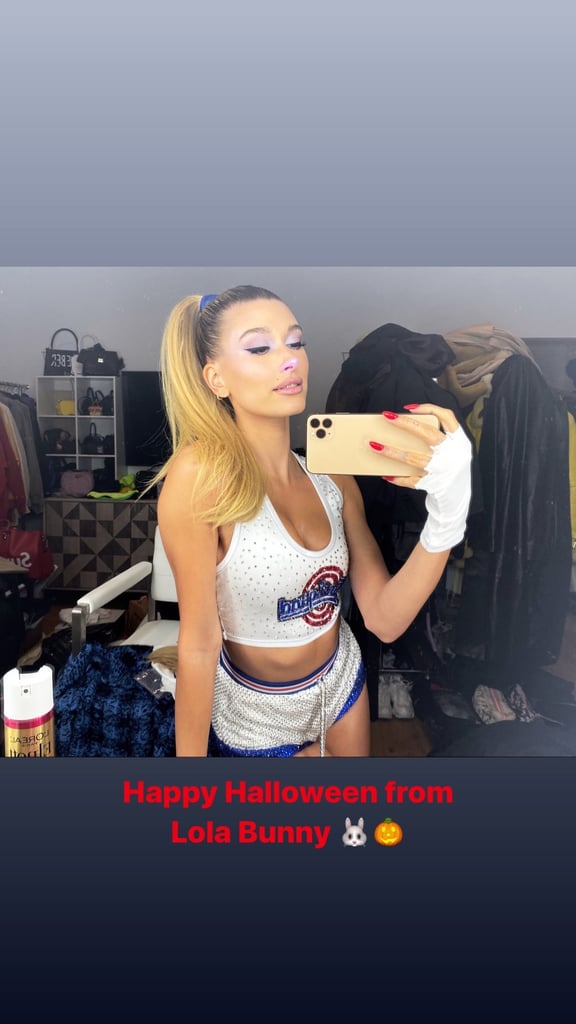 Hailey Baldwin went the nostalgic route for Halloween this year. The supermodel dressed up for Kendall Jenner's 24th birthday party as one of our favorite '90s cartoon characters. For the bash, Hailey went as Lola Bunny from the classic 1996 movie Space Jam. She danced the night away with fellow pals like Kourtney Kardashian; Gigi Hadid, who dressed up like Jim Carrey's character from The Mask (another classic movie!); and Kacey Musgraves, who went as a Dallas Cowboys cheerleader.

For the event, Hailey's stylist Maeve Reilly helped transform Hailey into the perfect Lola Bunny. She sported a pair of white shorts that were covered with tiny rhinestones and had a fluffy bunny tail on the back. She styled the shorts with a cropped basketball jersey that had the words "Tune Squad" written on it and was also covered in rhinestones. To complete her costume, Hailey painted the tip of her nose pink and pulled her hair up into a high ponytail, which she tied with a blue ribbon. She also carried a towel around her neck and wore white gloves. Keep reading to see all angles of Hailey's amazing Halloween costume.