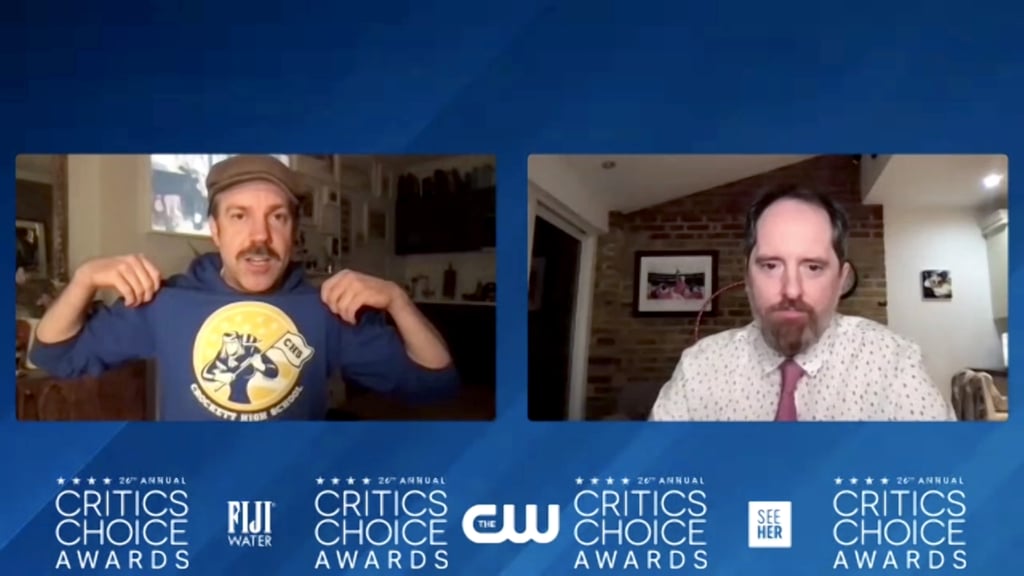 You Bet Jason Sudeikis Wore a Hoodie, and It Was a Sweet Nod to His Ex Olivia Wilde

Ted Lasso star and co-creator Jason Sudeikis won two Critics' Choice Awards, for best actor in a comedy series and best comedy series, then thanked his ex-partner Olivia Wilde in the virtual press room. "I want to thank my kids, Otis and Daisy. I want to thank their mom, Olivia, who had the initial idea to do this as a TV show. It was like, 'Wow, you and Brendan [Hunt] and Joe [Kelly] like doing that so much, you should do it as a movie or TV show.' I was like, 'No.' She was right," he said.

Jason showed off another hoodie after getting buzz at the Golden Globes for his tie-dye sweatshirt, which came from his sister's dance studio. He confirmed to fans he's got a whole assortment of hoodies that stand for various things he supports. Well, it looks like the night was dedicated to Olivia not only in speech, but in dress.

As it turns out, this blue sweatshirt says "Crockett High School," which is the fictional school in Booksmart (2019), for which he played the principal. Olivia made her directorial debut with Booksmart, so Jason's apparel basically said, "You supported my career, and I support yours." Olivia even commented on his choice of outfit! Scroll down for a quick mini timeline and backstory about this sweet moment (and to shop the hoodie before it sells out).