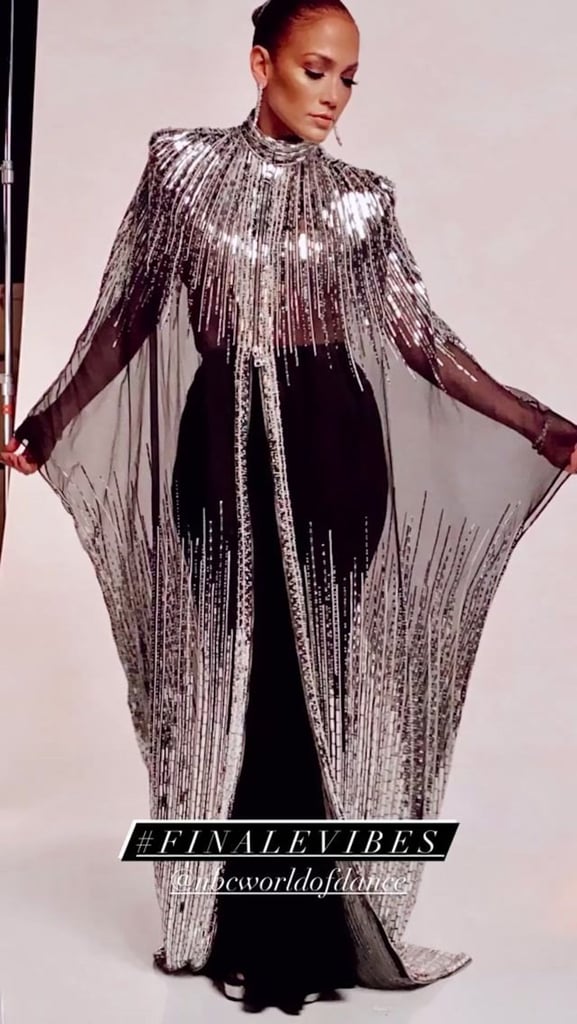 OK, Jennifer Lopez, I see you in your sparkly dress! The singer showed off her outfit for the finale of NBC's dance competition series World of Dance, which she judges. Of course, we weren't surprised that Jennifer chose a sparkly number to end the show's season with a bang. Jennifer wore a flashy silver and black gown with the most eye-catching feature: a sheer black cape that was blinged out. The gown featured a turtleneck, bold shoulders, and a zipper going up the front of the cape. The top half of her outfit was completely covered with silver sequins in a drip effect. The black dress itself featured a body-hugging silhouette and she finished her look off with jewels from Natalie Mills.

J Lo broke down her outfit on IGS saying she was wearing a "black maxi, sequined cloak, heels and slicked bun" and asked fans to replicate her look so she could see the final results. One fan, Monika Chojdak, shared a video of herself wearing an almost identical outfit — sleek bun and all! J Lo was clearly impressed because she reposted the fan's outfit on her IGS. Keep reading to get a closer look at J Lo's outfit as well as the fan's replica.

Jennifer Lopez
J Lo on Helping Latina Entrepreneurs With $14 Billion in Loans: "We Just Haven't Had the Opportunities"
by Chandler Plante 10 hours ago