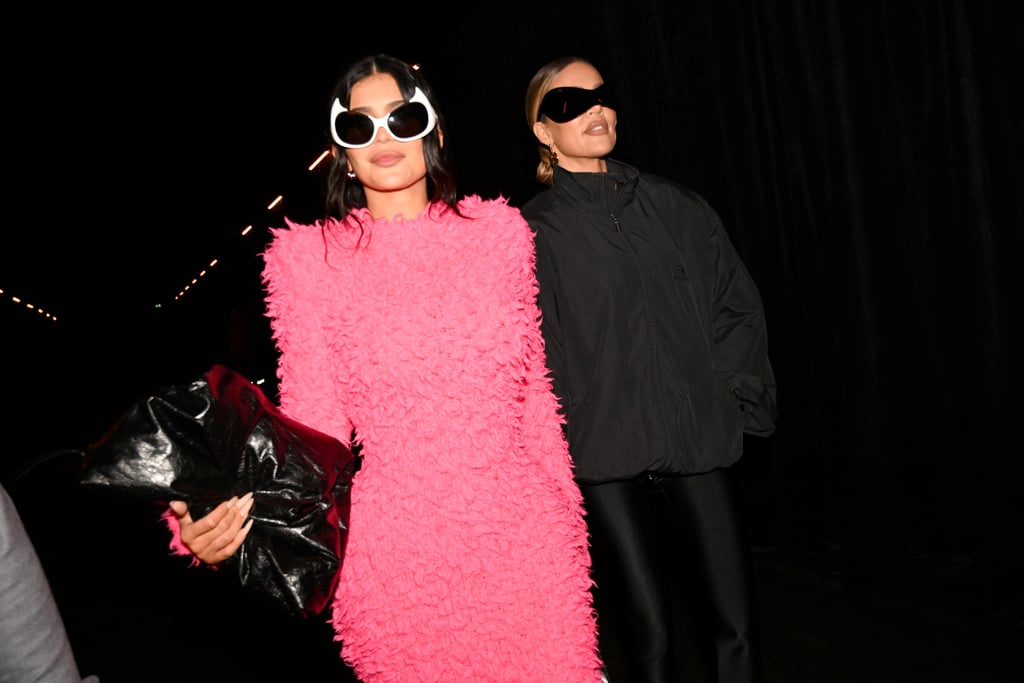 See Kylie Jenner's Every Look at Paris Fashion Week, From Catsuits to Underwear

Kylie Jenner has been making the rounds at Paris Fashion Week, sporting high-fashion looks and sitting in the front row everywhere from Balenciaga to Acne Studios. On Sunday, Oct. 2, she stepped out with sister Khloé Kardashian for Demna's "mud" spectacle, for which Kanye West made his modeling debut. Jenner worked with Alexandra and Mackenzie Grandquist on her wardrobe for the week, which included this shaggy pink maxi dress, fitted and replete with strong, structured shoulders and coordinated with Balenciaga knife boots, an oversize leather clutch, and white futuristic sunglasses.

For Jonathan Anderson's spring 2023 Loewe show at the equestrian arena of La Garde Républicaine on Sept. 30, Jenner served up modern-day boudoir in a white ribbed anagram tank and logo briefs from the brand styled over sheer black tights.

One day prior, the 25-year-old founder of Kylie Cosmetics and mom of two attended the Schiaparelli presentation in a plunging, royal-blue velvet gown, anatomical heart choker, and black tooth earrings. She also brought friends Anastasia Karanikolaou and Justine Skye along to the Balmain and Acne Studios front row, respectively.

While many of Jenner's sisters have attended Fashion Week in Paris throughout the years (Kim Kardashian recently made her couture debut on the Balenciaga catwalk in July), the past several days have shined the spotlight on Jenner. In a clip of the star that has since gone viral on TikTok, we see her embrace Balmain Creative Director Olivier Rousteing backstage, and fans have commented on her apparent discomfort with the situation. Though she's made many public remarks about her fame in the past, Jenner embraced this season's long string of shows nevertheless, documenting the assistance from her glam squad and posing for photographer Blair Caldwell on Instagram along the way.

Ahead, see her every appearance in Paris and shop some of the pieces she wore.

Celebrity Instagrams
Britney Spears Celebrates Her Birthday by Posting a Tribute to Her Sister, Jamie Lynn Spears
by Sabienna Bowman 11 hours ago