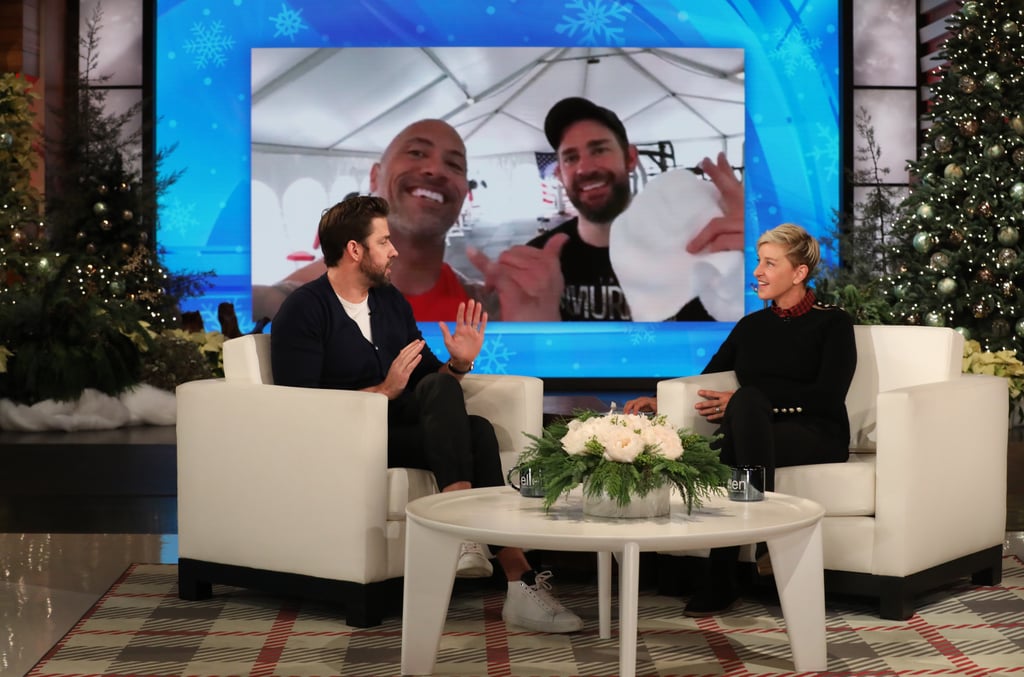 John Krasinski Dishes on Working Out With The Rock: His Gym Is Like an "Alien Spaceship"

Ever wonder what it's like to work out with Dwayne Johnson? Well, according to John Krasinski, it's comparable to being in an "alien spaceship" filled with foreign equipment, he admitted during a recent appearance on The Ellen DeGeneres Show. Ha, why are we not surprised?

Earlier this year, John became close workout pals with The Rock while his wife, Emily Blunt, filmed Disney's Jungle Cruise with Dwayne. Between his acting duties, The Rock squeezed in intense workouts in his traveling private gym, which he calls Iron Paradise because it houses a whopping 50,000 pounds of iron. No one had ever been in the tent-like gym besides Dwayne — until the actor decided to extend a rare invitation to John.

Related:
Dwayne Johnson Shows Off His Chiseled Abs After 18 Weeks of Training For Hobbs and Shaw

"I walked in, and it was like alien spaceships had landed," John told Ellen of the portable workout area. "He has 40 pieces of equipment that I've never seen in my life." John went on to detail how misusing an unfamiliar leg machine dubbed the Pit Shark landed him with a kink in his neck for three weeks. Despite this, he became increasingly comfortable in Dwayne's Iron Paradise, and the two regularly crushed workouts together until filming wrapped.

Hear what else John dished about The Rock's traveling gym ahead, and keep reading to peek inside the infamous Iron Paradise.

Jennifer Lopez
Jennifer Lopez Is Also Confused by Her Children's Schoolwork: "It's a New Math"
by Kelsey Garcia 15 hours ago

John Krasinski
In Another Episode of Some Good News, John Krasinski Arranged an Epic Hamilton Reunion
by Brea Cubit 2 days ago