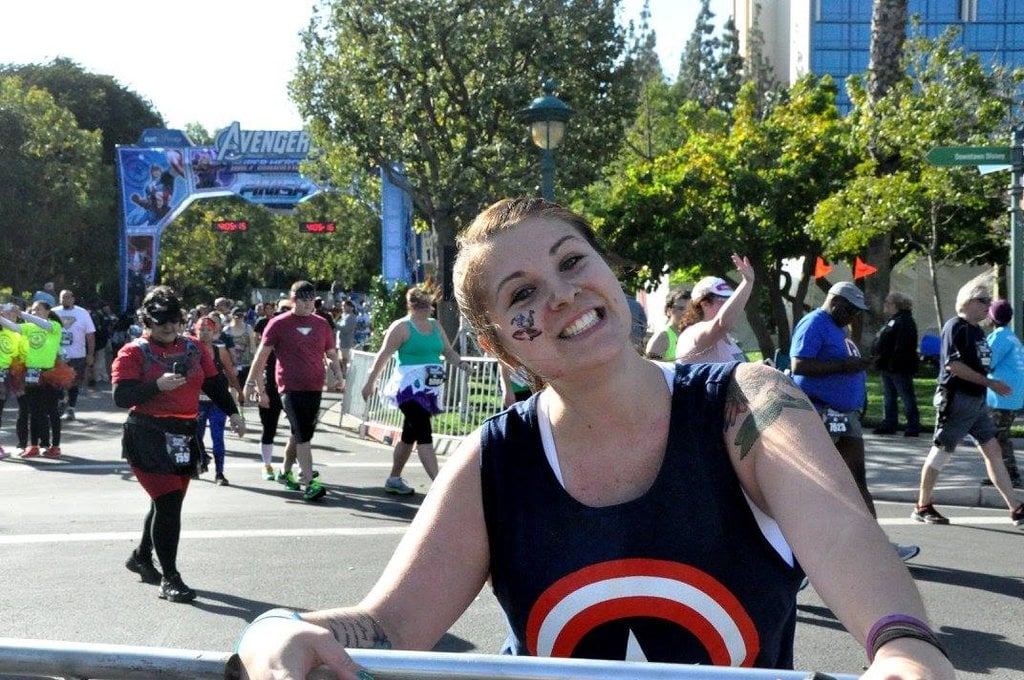 Repeat after me: running is not for everyone. Repeat after me again: it's OK to hate running. It took me so, so long to get to that point of acceptance, but I finally have and I feel like I'm healthier because of it, and not just physically.

When I was in high school, I was a cheerleader. My cardio was dancing and gymnastics, but every single one of our practices started with running a mile. Just one. I hated it every single time because I just wasn't good at it. I could never figure out how to regulate my breathing, and my sports bras never did their job properly, which was so painful. Running was also just so damn boring. But all the rest of the cheerleaders breezed through the run like it was no big deal, and I so badly wanted to be like them. I knew I didn't like running, but I wanted to.

An appreciation for running never happened for me in high school. It never happened in college either. When I worked out in college, I stuck to Spin classes, which were exhilarating and so much fun. But I still wanted to be a runner. And when I moved to California, to an apartment near a lovely walking trail, I told myself it was time to learn to love running. 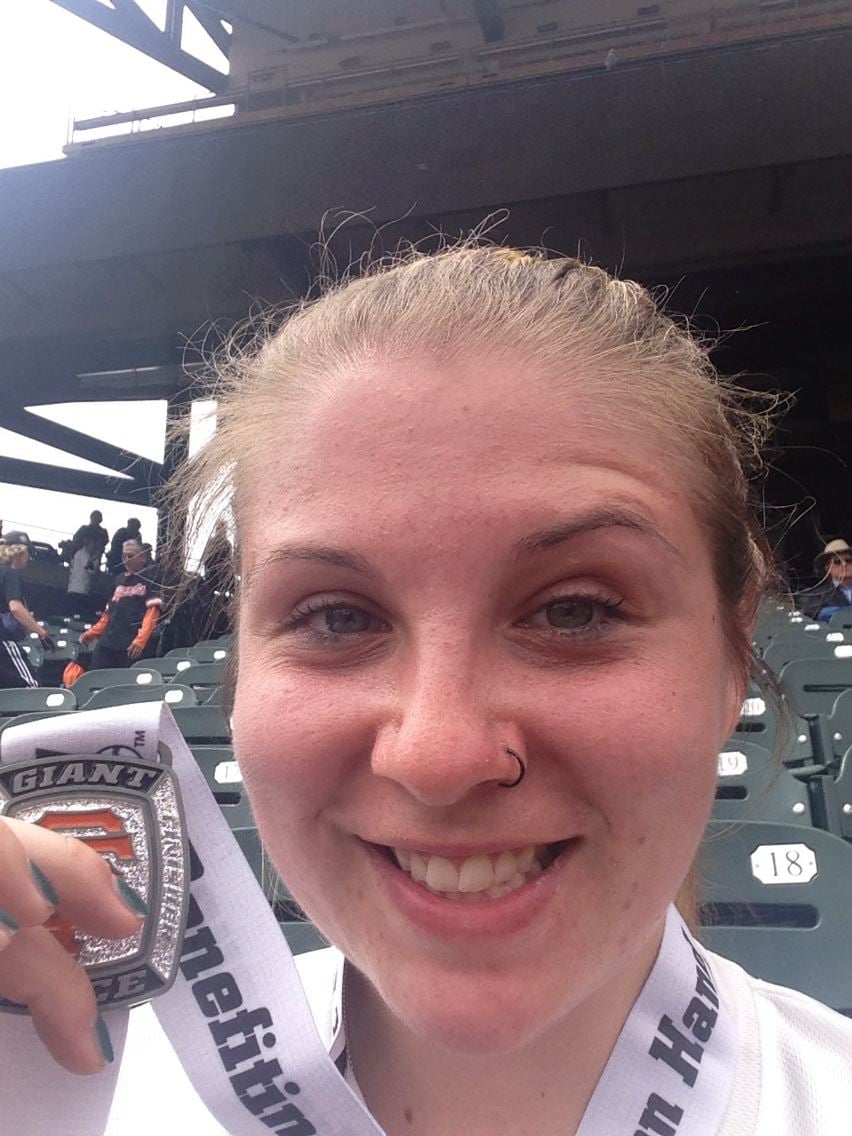 To motivate myself, I signed up for my first 5K. I got myself out on the trail with no training plan and just started to run. My first race wasn't easy; I didn't run more than maybe a quarter of it, but I completed it, and the rush I got crossing the finish line was something I can't even describe. I signed up for a couple more 5Ks to keep building my stamina and get to be an even better runner. I had convinced myself that if I was better at running, I would surely like it more. I had also had this ridiculous goal of completing a half-marathon at some point in my life, and this particular time period felt like the right time to do it.

It seemed like the good things that were coming out of the running would help me like running more.

So I kept running on my trail and sometimes on the treadmill at the gym, and I was still bored to tears every time, but I was able to run longer distances without stopping, and pairing the running with a healthier eating plan was actually helping me shed a few pesky pounds. It seemed like the good things that were coming out of the running would help me like running more. I would tell myself that running was great and it was keeping me healthy and I would soon get to the point where I could be in these races and not have to worry about being the last one to cross the finish line. (No shame in being last; you got out there and did it, so kudos.)

I spent the Summer of 2014 doing race after race. My times got better each race, and the feeling at the finish line just kept feeling sweeter. But the start of every race filled me with a little bit of dread knowing that I was about to spend the next hour doing something I didn't really enjoy just to get those few seconds of bliss at the finish line.

I kept doing it anyway, because I still felt like running was something you had to do to be fit. Everyone runs, right?

Midsummer that year, I was offered complimentary entry into the Nike Women's Half-Marathon in San Francisco — which was taking place on my 28th birthday — and I knew I had to do it. I knew this was everything my training was leading up to, and I felt like the fact that it was on my birthday was a sign that this was going to be my running turning point. If I completed the half-marathon of my dreams, I would truly be able to consider myself a runner.

I'm going to be brutally honest here. Waking up at 3 a.m. on my birthday and running for three hours through San Francisco was not fun at all. I hated almost every second of it until I reached the finish line. I actually started hyperventilating when I finished because I couldn't breathe properly from running so hard and I was crying because I couldn't believe I'd actually done it. It wasn't a pretty sight.

Coming home from the race was painful. The rest of my birthday was spent in bed in pain. The following days were painful. Everything hurt, but I felt like a runner. I wanted to do another race, so my best friend and I signed up for a Disney half-marathon so I could get that glimpse of a runner's high at the finish line.

Related:
I Broke Up With Running and My Fitness Life Is So Much Better

We did that race, and despite my smile in the picture at the top of this page, I was in pain again. My knees ached, I had burst blisters on my feet, my chest hurt, and I was elated to just be done. It wasn't that I hadn't prepared for the race, either. I used KT tape on my bad knee, I wore running socks and Vaselined the sh*t out of them, I had my necessary hydration and fuel for snacks during the race. I did it all correctly, but it still just sucked. And then I spent the rest of the day in pain again.

So why, do you ask, did I sign up for yet another half-marathon last year? Because I still had dreams of being a runner and doing all these cool races with all these other fit people. I tried to train for this one, but literally every time I walked out the door for a run, I was unhappy. I didn't go as much as I should have, and I made a lot of excuses for myself. This time, the race was horrible. More achy joints, more disgusting blisters, and more unhappiness.

This was the point that I decided I was done running. I promised myself at that finish line that unless I was being rewarded handsomely (like with Harry Styles or a million dollars), I wasn't going to run again because it just wasn't worth it. There are so many other workouts that I enjoy more, like U-Jam Fitness. U-Jam was fun and didn't fill me with dread, and you know what? It's just as great cardio as going for a run and it's a hell of a lot more energizing.

I threw my dreams of being a runner out the window last year, and I decided I just really don't care. I admire people who love running and are really good at it, because after trying for years to be them, I know what hard work it is. But I also appreciate that I was able to recognize a workout that wasn't for me and figure out something that does work for me. You don't have to run to be in shape. I dance, I bike, I power walk to the subway every day, and I'm doing just fine. The medals from all my race finish lines are a nice reminder of the couple years I spent on trying to run, but if I never wear a race bib again, I'll be just fine.