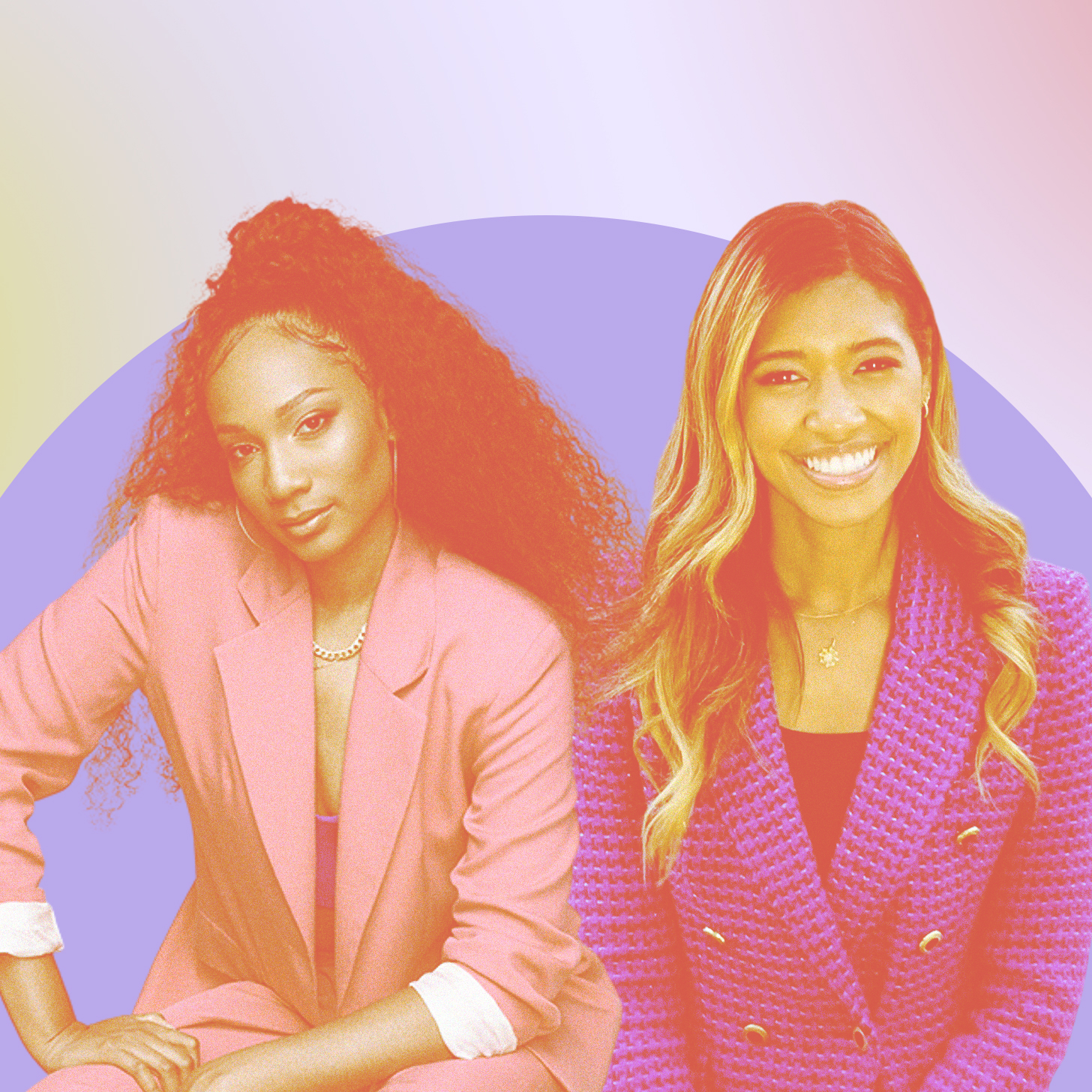 I don't think women of color ever get used to feeling like an "other" in majority-white spaces. The act of walking into a room full of people who don't look like you will always be unsettling. You'd think the experience would be extinct by now, but it's pervasive in nearly every corporate job in America.

As you glance across office conference rooms, briefly making eye contact with coworkers of different hair texture, vocabulary, and life experiences, your posture becomes straighter, your palms get sweatier, and your game face goes on. The spotlight, it seems, is pointed directly at you.

Black women sports reporters know this feeling better than anyone. The room they walk into is much bigger than the average conference room — it's a stadium or an arena filled with tens of thousands of fans. The spotlight they face is a literal one, with much higher wattage.

To give you an idea of how skewed representation is in sports media, 77.1 percent of reporters in the industry are white (66 percent male, 11.1 percent female), according to the 2021 Sports Media Racial and Gender Report Card from the Associated Press Sports Editors. While Black men hold 10.7 percent of reporter positions, Black women hold just 1.1 percent.

That hasn't stopped Black women sports reporters — including Jayne Kennedy, Jemele Hill, Robin Roberts, and Cari Champion — from becoming household names. It's hard not to ask yourself how they do it — how they find success in an industry with so few people who look like them. I spoke to two of the industry's rising stars, Arielle Chambers and Kirsten Watson, to learn how they've managed to chart their own path. Their stories are, of course, unique; however, our conversations showed me that these trailblazers tend to fall into one of two camps. There are those who forcefully carve a place for themselves within systems that already exist, and there are those who create an entirely new lane of their own.

Kirsten Watson loves a challenge. The 29-year-old reporter has covered some of the biggest sports teams in Los Angeles (at the same time), including the Lakers, the Sparks, the Dodgers, and the Rams. Within the first five minutes of our conversation, I can tell that it was Watson's determination that kept her coming back, burrowing into industry crevices that weren't designed to fit her. 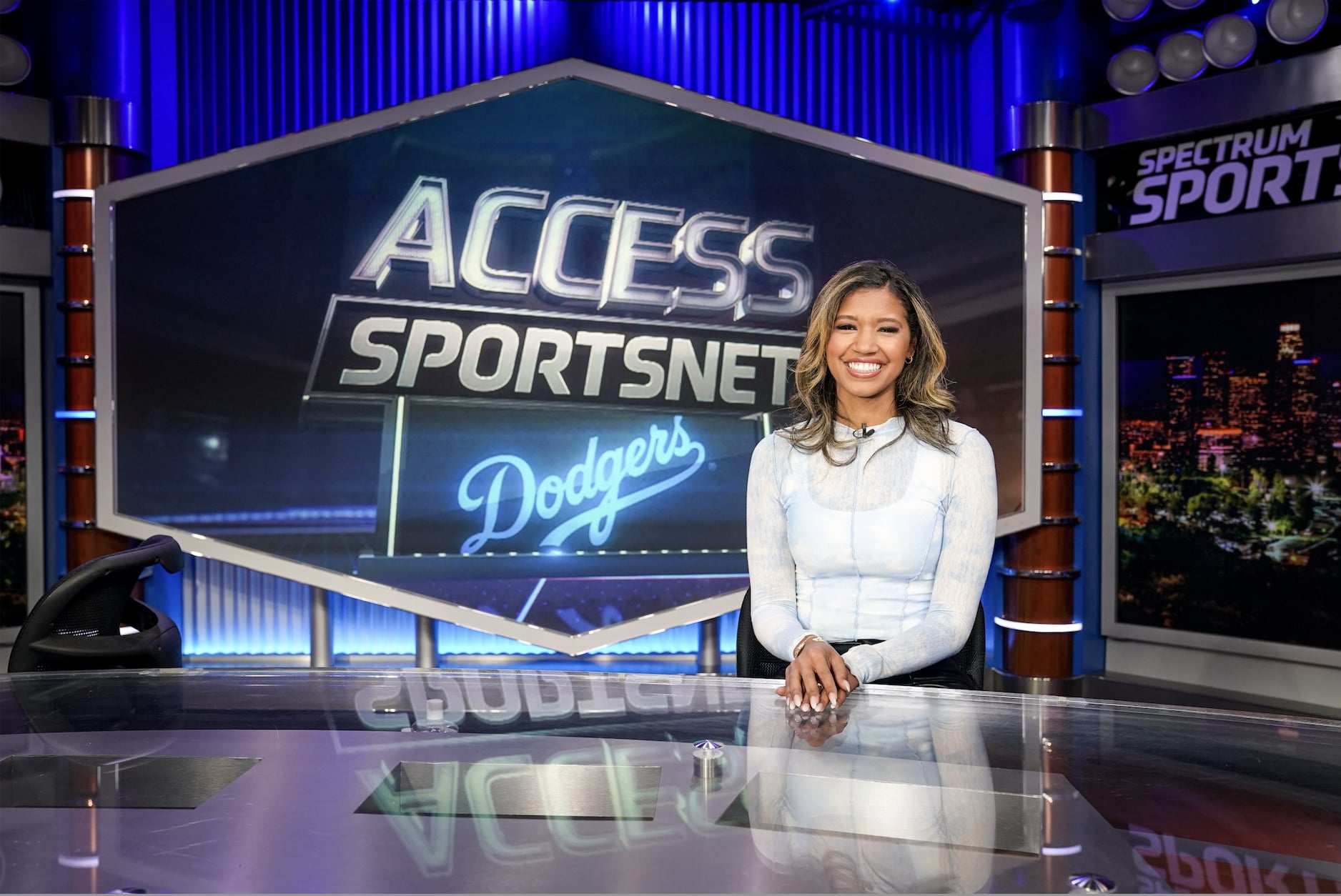 Her most recent role as a reporter and host for the LA Dodgers is a prime example. Black female baseball reporters are far and few in between. The MLB fan base is reportedly 60 percent white and majority male; the players' roster isn't much more diverse. "When I get to the ballpark, I do look around, and more often than not, I am the only Black woman in my space covering a team," Watson tells POPSUGAR.

At first, she let that disparity get to her. "I felt like I had to make myself digestible to a white male," she says. She became hyper aware of the way she spoke, more mindful of how loud or excitable she was during athlete interviews, and intentional about how she styled her hair and makeup. "It was really hard for me to find who I am and who I was on TV," Watson says. Over time, however, she began to find her groove, refusing to let her environment dictate her integrity. "It got to the point where I was like, 'I can't do that. I have to be myself,'" Watson says. "I had to tell myself that I belong, and I'm supposed to be exactly where I'm supposed to be."

It didn't help that she was learning the job on the fly, hosting game days for a sport she'd never reported on before. She wasn't surprised when comments about her experience came flooding in on social media when she first started. "I've been told I was a diversity hire" and "that I should not be here," Watson says, adding that fans have suggested that the only reason she got the job was because the team has partly Black ownership and a Black manager. However, her talent speaks for itself. Watching Watson interview players is like watching a tennis match: she volleys questions back and forth, already anticipating their answer and prepped with a follow-up question they didn't see coming. She'll force them into vulnerable positions so that she can get the W — which, in sports journalism, translates to a good sound bite and respect from the players. 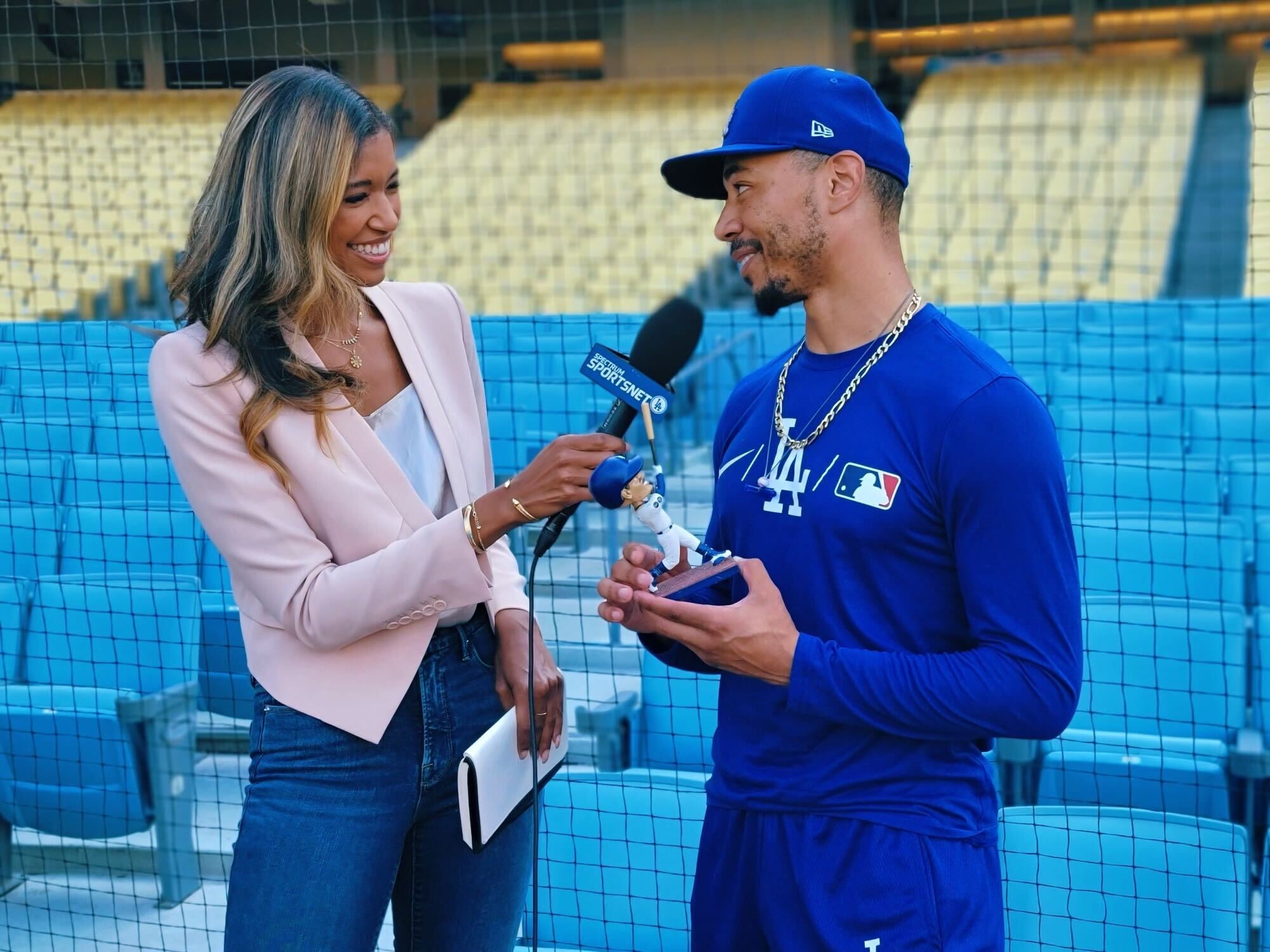 Watson has been working toward this career since she was a kid. Her grandfather was former president at HBCU Florida A&M University, and she regularly watched him walk out into a stadium of 25,000 people, surrounded by the excitement of the crowd, the players, and the band leading the school in their fight song. Far from feeling intimidated by the pressure of the crowd, "I'd always want to go out on the field with him," Watson says. "I think that's kind of where it began."

Her family also immersed her in sports from an early age. She played basketball, was on the swim team, and did gymnastics. Her main priority, however, became volleyball: she played all the way through college as a D-1 athlete at Columbia University.

When it came time to choose between playing volleyball professionally or exploring other career opportunities, Watson says the choice was easy. She'd long admired the careers of reporters like Claire Smith, Samantha Ponder, and Maria Taylor, and she used their success as a blueprint for her own life. She stayed at Columbia and got her master's in journalism, becoming the first female recipient of the ESPN and NABJ Stuart Scott Scholarship. She subsequently landed a job at NFL International and went on to dominate the big three sports markets in Los Angeles.

"As a woman of color, our margin for error is very small," Watson says. In casting her net far and wide and gaining experience across different sports, she aims to pave a path for other Black kids to walk in the future — and hopes that her example might give them the freedom to explore what they're good at within the industry. "That means the world, because I did what I was supposed to do," Watson says. "I continued to help create a space in which we have more opportunities."

Arielle Chambers is on a similar mission. Like Watson, Chambers was a multihyphenate athlete from a young age, juggling gymnastics, swimming, Taekwondo (she's a first-degree black belt), and cheerleading. She grew up in Raleigh, NC, in close proximity to North Carolina State University. "I fell in love with women's basketball there," Chambers tells POPSUGAR. In fact, she quit cheerleading in high school to become the basketball team manager. Traveling with the team allowed Chambers to solidify connections with prospective professional athletes — the kind that help build a career. One of the players on her team happened to be Lakevia Boykin, who went on to play for the AAU team Carolina Flames (then called the Garner Flames) and is now the women's basketball coach at Rice University.

After high school, Chambers went back to cheerleading, joining the North Carolina State team. She graduated with a degree in communications and went pro, cheering for teams like the Knicks, the Rangers, and the New York Liberty. Along the way, Chambers continued forming strong relationships with fellow athletes, many of whom also went pro in their own sports. Those relationships, more than any formal training, were the seeds of her future career. "When I went on to cheer pro, I noticed that a lot of [my athlete friends'] stories weren't being told," Chambers says. 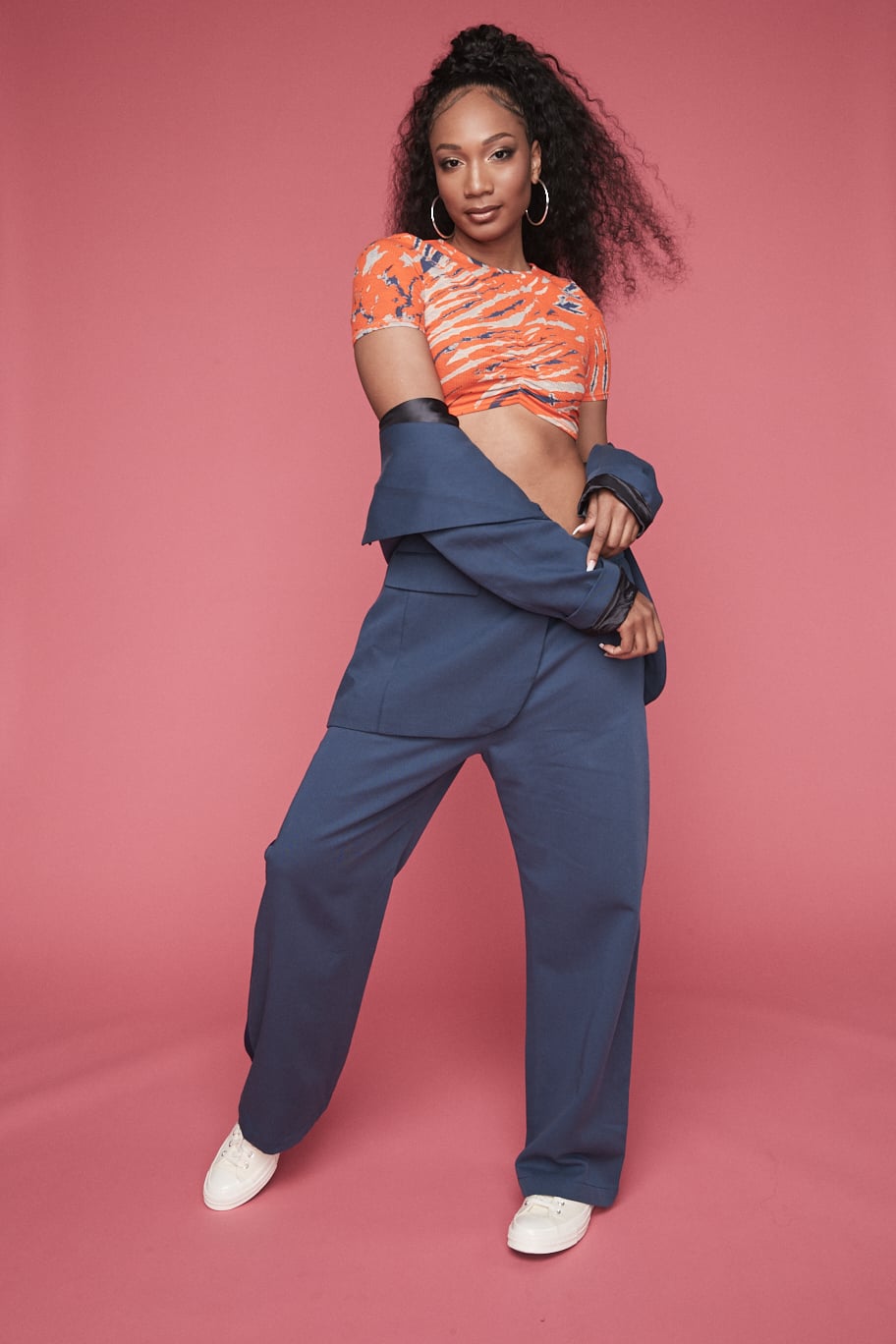 During games, Chambers would effortlessly snag sideline and postgame interviews with players she'd known since they were kids, connecting with them in ways that reporters from major networks couldn't. She'd post the content to Twitter, and through her exceptional grassroots coverage, independent reporting, exclusive quotes, easy banter with athletes, and passionate coverage of underserved leagues, she eventually built a name for herself as a champion of women's sports. 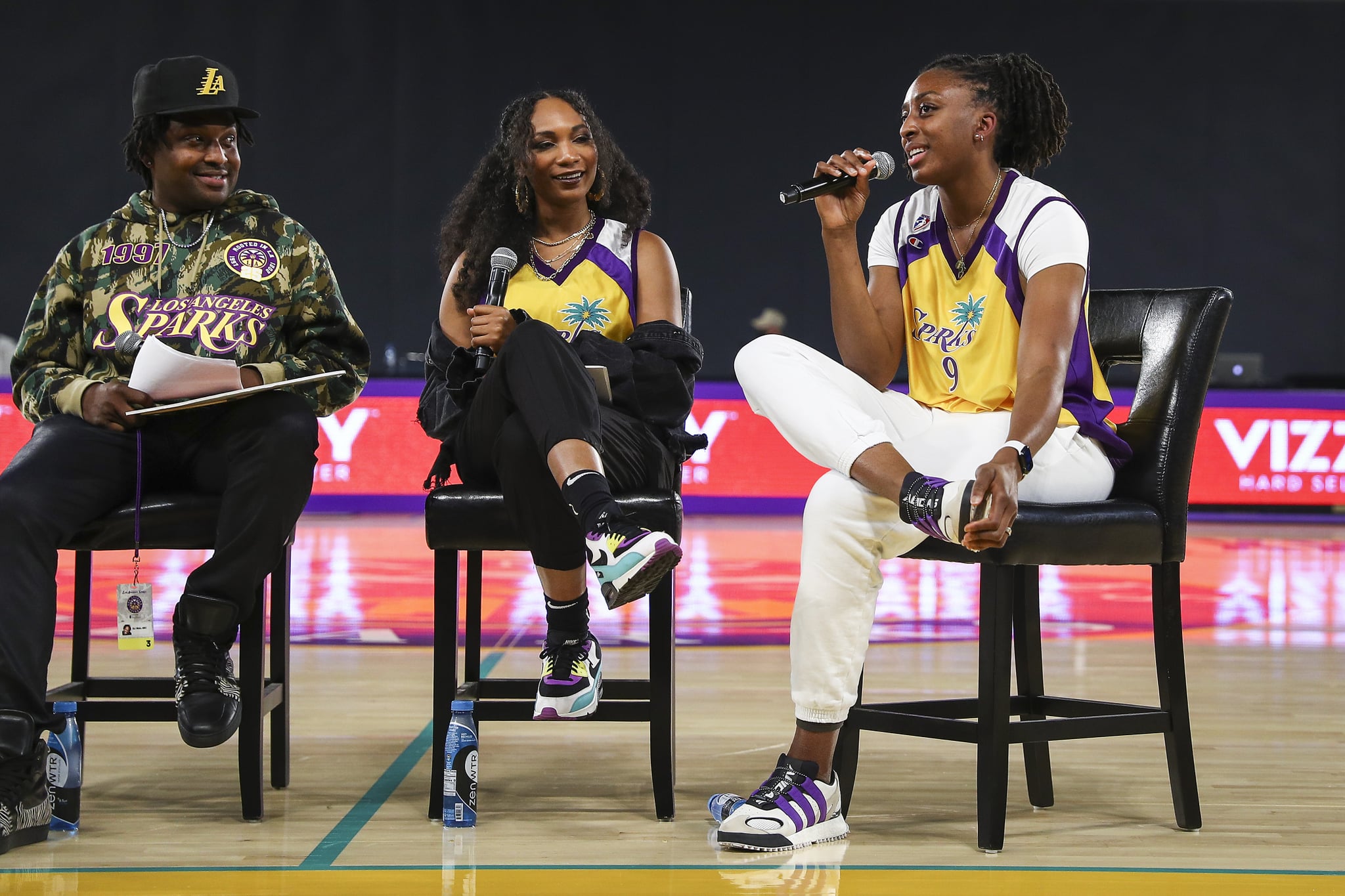 In 2017, she coined the phrase "THE WNBA IS SO IMPORTANT," which subsequently went viral. Since launching her own career, Chambers has been an onscreen personality for the WNBA, NBA, and NHL. Her most prized accomplishment, however, is HighlightHER. When Doug Bernstein, the general manager of Bleacher Report, asked Chambers if she would build out their women's-sports platform, she had one request: "I just want the trust to do it my way." Bernstein agreed, and it's a bet that's paid off many times over. Since 2019, HighlightHER has amassed more than 192,000 followers, but it still feels like a group chat with your close friends where you share memes, post career and life updates, and celebrate each other's successes. That vibe was deliberately created by Chambers, who runs the platform herself. "I want everybody to be able to look on the page and identify with somebody," she says.

Chambers herself hasn't always felt at home within the industry. "Being a Black woman in itself is a rebellion. Our existence rubs people the wrong way, especially us occupying space in a loud way," she says. Before she launched HighlightHER, the journalist says that people in the industry weren't eager to work with her. "I've only heard 'no' until now," she says. When interviewing for jobs at other networks, she's been told that she's too much or not the right fit, or that they don't like her delivery. She's also been asked repeatedly, "Why would you want to invest in women's sports anyway?"

But that hasn't stopped Chambers. "All those 'no's helped shape my relentlessness," she says. "It's my responsibility to wear my curls and my bamboo earrings on Turner Sports and deliver a message. It's my responsibility to use AAVE during interviews because I can." These choices may seem inconsequential to the average person, but when athletes see Chambers on the job being herself, they feel empowered to do the same. "Every time I have a player say, 'Thank you for hearing me,' or 'You're just so easy to talk to you,' that's a career moment for me," she says.

Chambers is excited about the future of Black journalists in sports media. Despite the hurdles, both she and Watson have managed to stake their claim. "There are times where it feels that this industry is not made for us," Watson says. "But that doesn't mean that we can't be a part of it." "We are the movement, we are the culture, we are the thing that's going to make it shake," Chambers says. "To be a Black sports journalist, it's the responsibility to keep pushing society forward."