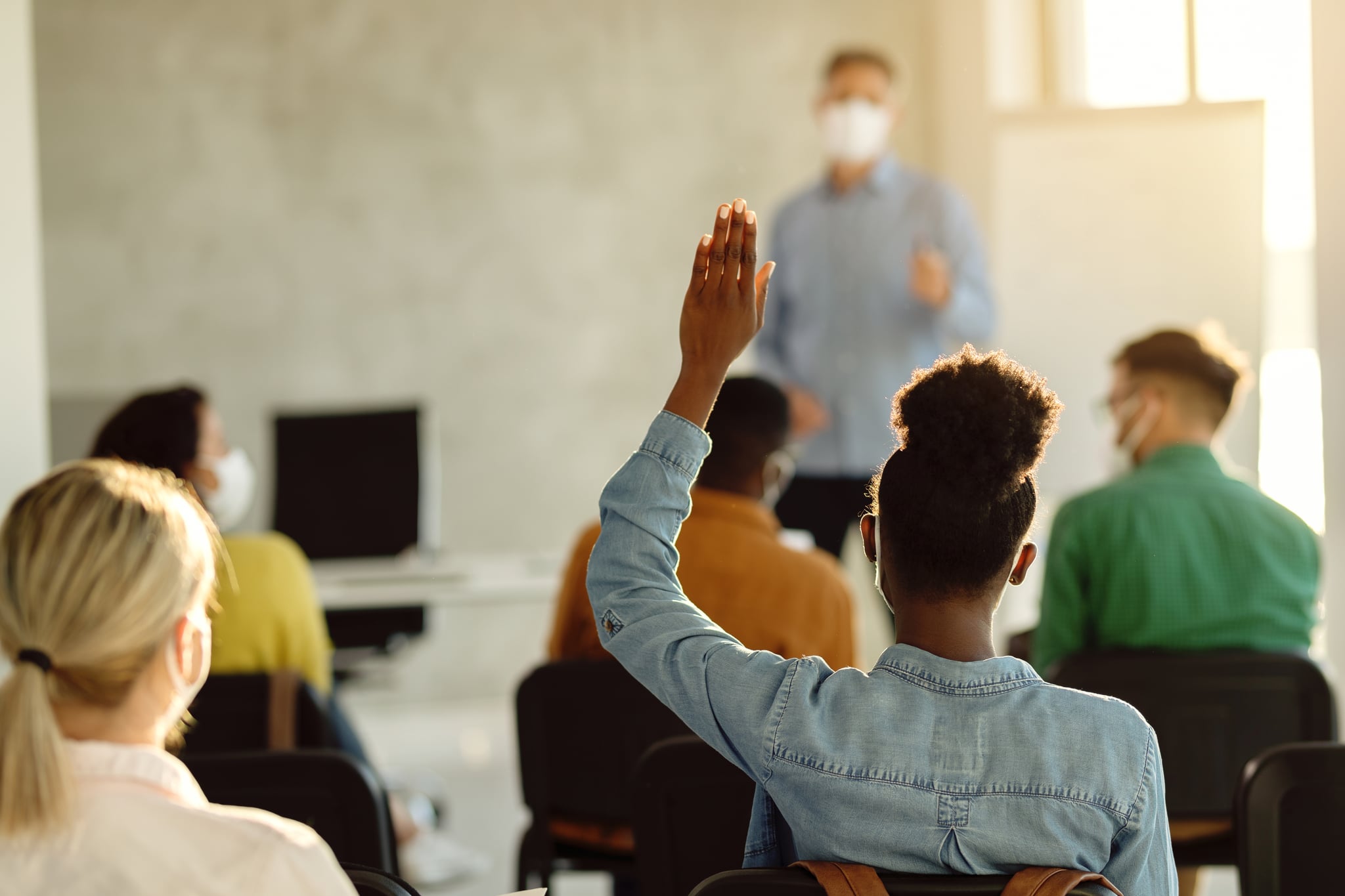 Being the only Black student in the room at a PWI (predominantly white institution), where you represent your entire racial group, is a particular experience that many Black students still experience within their academic careers. After this summer's inception of the "Black at" social media movement that exposed the deeply ingrained racism in private schools, the conversation of the singular Black experience and its impact has been elevated and is finally getting the attention it deserves. As more Black students honestly and candidly share their experiences, their truths are a gateway for educators, school leaders, and school communities to think critically about how they contribute to and are complicit in perpetuating racism that negligently places the undue burden of representation on Black students — one they can no longer carry as the only one in the room.

It's 2021, and yes, for many Black students attending PWIs, they are still navigating a singular experience as the only one in the room, enduring the cumulative effect of racial trauma in the form of microaggressions. The singleton experience is one that is often talked about as a visible data point, however, not from those who live with this reality.

Black students often carry the burden of representation when it comes to speaking about things from a historical context, and this burden is exacerbated when they are the only Black student in their class.

The "Black at" movement on Instagram brought many of these experiences to light, with Black students and alums sharing their painful racialized experiences at the hands of the schools responsible for their care. They rightfully questioned the systemic racism and institutional practices that disproportionately harmed Black students in an effort to call for more accountability and justice.

POPSUGAR spoke with a few Black students who shared what it's like being the only one in the room. Mahari Blanks, a senior who attends a private school in Los Angeles, reflected on her experience, telling POPSUGAR: "Being the only Black student in my grade since I was in fourth grade has been an isolating experience for me. I felt the constant need to suppress my Blackness to make others around me feel more comfortable. It has been difficult, having no one in the classroom or in your friend group that looks like you and can relate to your experience in and out of the classroom."

Black students experience a myriad of microaggressions that are exhausting to deal with. Dylan Washington, a senior at a school in the Bay Area, shared her specific experience surrounding the microaggressions she's dealt with. "People are extremely interested in my hair and always want to touch it," she said. "They just reach in to touch it. I don't think people understand what Black students have to struggle with when attending a PWI." In addition to the microaggressions concerning hair, other common ones experienced by Black students at PWIs include the expectation that they're good at sports, people asking them to speak in a "Blaccent," or the assumption that Black students are in schools as performers for a white audience instead of seeing the fullness of their humanity.

Black students often carry the burden of representation when it comes to speaking about things from a historical context, and this burden is exacerbated when they are the only Black student in their class. "Being the only one means that people look to you when it comes to speaking on Black issues," Blanks said. "I have felt this in most classes, especially in history and English classes. It's hard to tell if people want to hear what I, Mahari, have to say, or what the Black community has to say. This distinction caused me to always lead with, 'I speak from my own perspective and opinion, not for the entire Black community,' when I am speaking."

Related:
How Being in Nature Provided Healing For Me After a Summer of Racial Trauma

To counter their homogenous high-school environments, Black students will oftentimes intentionally seek a collegiate setting that is markedly different. "My experience as a singleton has definitely informed my choices when selecting a university," Blanks said. "I sought out communities that have been actively engaging in diversity and antiracism efforts for years as well as a school that offered a variety of spaces for marginalized students. I wanted to be a part of a community that would welcome my leadership, involvement, and identity as a Black student on campus." Washington added: "I specifically chose a college that is more racially diverse, where there will be more people that look like me, extending from the student body to the professors that I can learn from."

Steven Wells, a first-year college student, made the decision to transfer to another university located in his hometown due to the racial stress that came with attending his predominantly white college in Iowa. "At the beginning of my first year, a Black man was murdered and found burned about 30 minutes from campus. It was excruciating to be living in fear of my safety in an all-white town," he told POPSUGAR. "After this incident, I reevaluated my overall well-being and knew I would never feel comfortable being one of the only Black students (and people) in the entire town of Grinnell. When you are Black, there is so much more we have to think about and consider when choosing a college — racial identity was never a factor that my white peers had to consider when selecting a school."

After the murder of George Floyd, many schools released statements vowing to become antiracist, but unfortunately, very little has changed so far. "I've noticed that some members of the BIPOC community were committed to bettering themselves, and that was heartwarming to see many in solidarity with the Black community; however, it was also disheartening to see those who were performative with their activism [before] reverting back to old patterns," Blanks said. "There is a remaining school culture that is still riddled with anti-Blackness."

To support the singular Black experience within PWIs, Black students often find refuge within their community via affinity groups, where they come together to uplift and celebrate Black joy. "Spaces such as our Black affinity group, along with the Black Student Union led by Black faculty who are my mentors, have been essential in helping me along the journey," Blanks explained.

As the conversation ensues on the impact of race and racism within school communities, school leaders and teachers need to pay more attention to creating a classroom and school experience that does not contribute to the isolation and "othering" of Black students. That means not asking Black students to speak on historical events such as enslavement, because one, they were not there, and two, it is not their responsibility to be the spokesperson for the impact of white supremacy. History should be delivered in a way that creates the opportunity for everyone to learn and think about their roles in systems of oppression manifested today, but not at the expense of pain and trauma on the Black students. Overall, schools need to think critically about their institutional practices and policies that bring harm to Black students, even if it's without malice or ill intent. In 2021, having the best of intentions is no longer good enough — we owe it to the students to get this right. Schools must extend their efforts beyond performative gesturing where they not only work to increase the racial diversity of the students and faculty but also adopt antiracist practices that both dismantle inequities and work to build an inclusive school culture.

Related:
How 5 Women Are Redefining What Black Joy Means to Them: "I Know What My Magic Is About"

"Being the only representative for the Black community at a PWI can feel intimidating, but my advice to Black students would be that it is not your responsibility to educate everyone on the systemic racism that has affected the Black community," Washington said. "Only give your time to people who are genuinely wanting to do the work themselves to get educated on their privilege and working to truly live what it means to be an ally."

Blanks echoed that sentiment, adding, "For anyone who is going through an experience like what I have had, my advice would be to seek out a safe place to possibly engage in an exchange with other Black students (even if they are younger than you) and the Black faculty that are at your school. Even though I could count on one hand the number of Black faculty at my school and they could not be with me in the classroom or at lunch for those awkward conversations, their support, validation, mentorship, and example helped me get through my experience."

Hopefully in the future, the singleton experience becomes a relic of the past, but until then, Black students who go through school as the "only one" should be able to show up not as caricatures or lab experiments performing for the white gaze but as their authentic selves in an antiracist educational environment that affords to them all the full advantages that their ancestors so valiantly fought for.