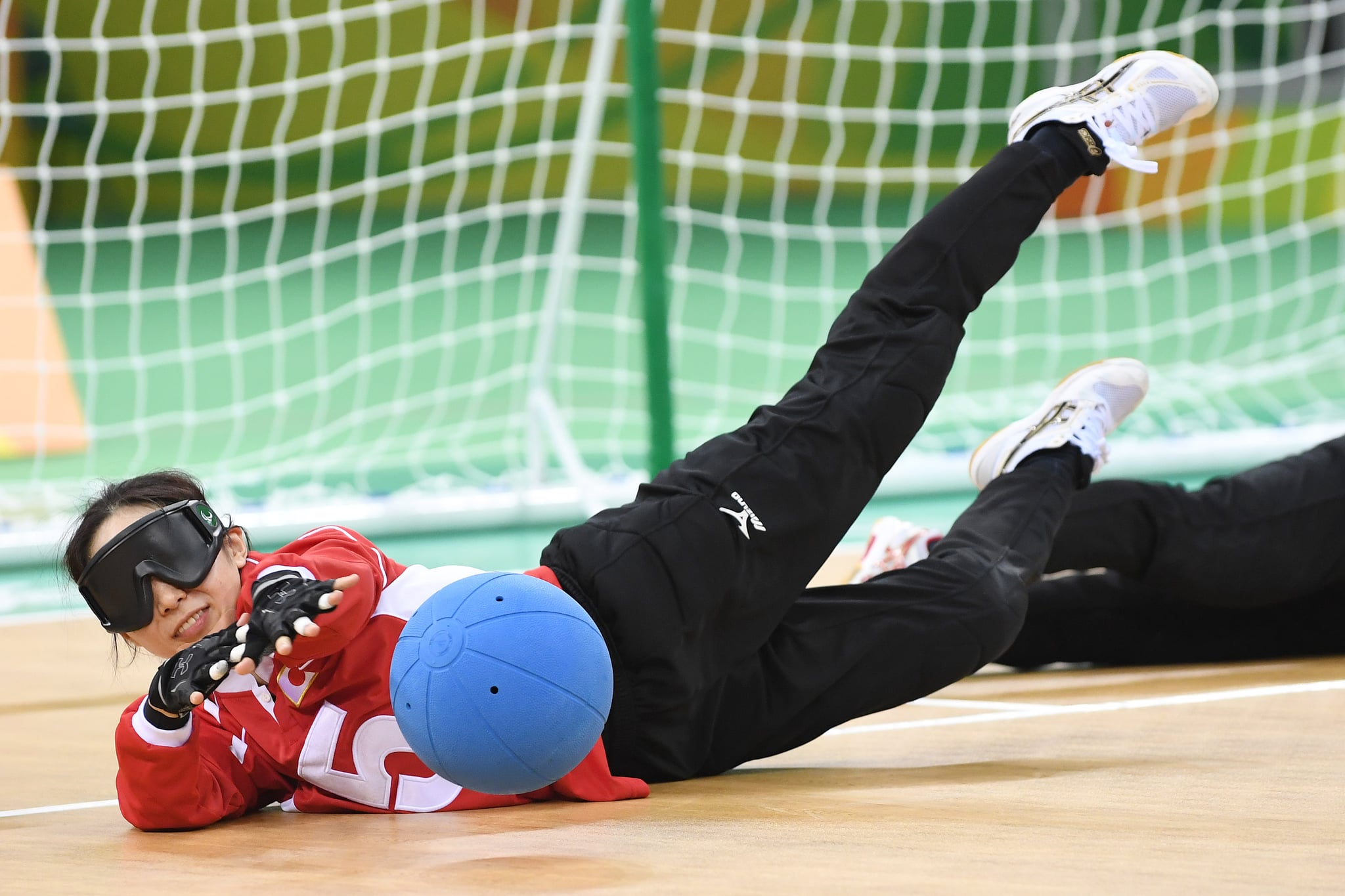 Goalball is one of the many sports you'll be seeing in the upcoming Tokyo Paralympic Games. Goalball, the first team sport for vision-impaired athletes, was officially adopted onto the Paralympic roster in 1976 on the men's side, then 1984 for women. A total of 10 women's teams and 10 men's teams maximum are allowed to contend for podium spots, and Lithuania (men's) and Turkey (women's) are the defending champs, with the USA winning men's silver and women's bronze in 2016. Counting both men's and women's Paralympic medals in goalball, the US is the most dominant in the history of the Games, as documented by the International Blind Sports Federation (IBSA). Check out more about the sport ahead.

What Is Goalball, and What Are the Goalball Rules?

Goalball originated in 1946 as a way to rehabilitate blind World War II veterans, and it is now played competitively in 112 countries around the globe. Two teams face off on the court (59 feet or 18 meters long and 29 and a half feet or nine meters wide). Players have a range of visual impairments — "partially sighted or totally blind (B1-B3 classes)," as Olympics.com states — and wear eyeshades, so that regardless of the type of visual impairment, athletes must rely on other senses. According to the IBSA goalball rulebook used through the end of 2021, players must also have their eyes covered by gauze patches at every major championships.

Only three players out of the usual six total on each team are allowed on the court at a time, and they all guard their team's goal. The goals are the width of the court on either end. The hard rubber ball used is never kicked, just thrown in a variety of ways, and it has holes so you can hear the bells embedded inside. Spectators have to stay quiet during field of play.

According to Teamusa.org, penalties aren't usually physical in nature since teams remain on opposite ends of the court. Instead, the most common penalties are "high balls," meaning a throw doesn't make contact with the floor in the thrower's "team area" (a section of the court in front of the goal that players are defending, which is divided into the Orientation Area closest to the goal and a Landing Area), and something called a "long ball." This is when a ball doesn't touch the neutral area in the middle of the court or the team area.

Team USA women's goalball coach Jake Czechowski describes three different types of throws in goalball to Teamusa.org: smooth, a throw where the ball rolls and stays in contact with the floor; skip, a type of throw where the ball skips across the floor; and bounce, where the ball has more height. Players, too, will sometimes spin before throwing or will throw the ball backward between their legs, which you can see in this footage from the last Paralympics.

Amanda Dennis, who will be on the US women's goalball team in Tokyo, told POPSUGAR via email that if you had to compare aspects of goalball to other sports, the underhand throwing styles are similar to bowling and kickball pitching. The spins that some players incorporate into their throws are similar to discus. Defending the goal, she said, is comparable to soccer; you're diving to block balls that are going 40 to 50 miles per hour. "This means players must be laterally agile," she wrote, "because generally, that's about 0.5-0.7 seconds from when the defender releases in a throw to the initial defensive block."

How Is Goalball Scored?

Simply put, teams are trying to score goals, and the team with the most goals at the end of the competition wins, but any game will end once a team leads by 10 goals. Olympics.com explains that defending players have 10 seconds after touching a thrown ball to throw the ball back. Dennis said this 10-second rule is the most enticing part of goalball because it highlights how truly fast-paced the sport is. "It doesn't matter if the ball hits you and ricochets forward and you have to go chase it and pass it back to a teammate, you MUST throw it back fast, which really keeps crowds engaged and the game fast," she said. If a player doesn't block and throw the ball back in 10 seconds, they have to defend the entire nine-meter-wide net by themselves for a penalty shot, she noted.

Games consist of two 12-minute halves separated by a three-minute break, and if a game enters overtime in the event of a tie, two three-minute halves are permitted. The first team to score a goal is pronounced the winner. If the score stays tied after overtime, the winning team is decided by extra throws — kind of like a shoot-out in hockey, where individual players shoot their shot (in this case, throw their throw). "A winner will be declared when one team is ahead by more goals than there are throws remaining," the rulebook states. Sudden-death extra throws will apply when a tie still remains.

Goalball at the Paralympics

At the Paralympics, there is a preliminary pool play followed by knockout rounds. Competitions start Aug. 24 at 8 p.m. ET / Aug. 25 at 9 a.m. Tokyo time. Ahead, you'll find a video announcing the men's and women's goalball teams for the US. Included on those teams are a few first-time Paralympians along with athletes who are veterans like Dennis, some even returning for their sixth appearances.

Dennis said that she believes many people view goalball as easy, when it's actually the opposite. The sport, she said, is very complex, and for someone who has limited sight after being born with aniridia (meaning she doesn't have irises), putting on an eyeshade for the first time and learning the basic movements was an extreme adjustment. You have to develop spatial awareness, ear-body coordination, and the ability to dive within seconds. "To be in front of the goalball isn't enough to stop it, you must have your body just right (depending on the type of throw from your opponent) or the ball will hit you and flip into the goal anyway," Dennis stated.

"From an outsiders view it doesn't look that hard, but think about me blindfolding you and asking you to shoot a basketball in a hoop," Dennis challenged. "That's essentially how we practice spot accuracy and how we have to execute in games."

Sports
US National Teams Are Splitting World Cup Prize Money. The Internet Is Mad About It.
by Maggie Ryan 23 hours ago