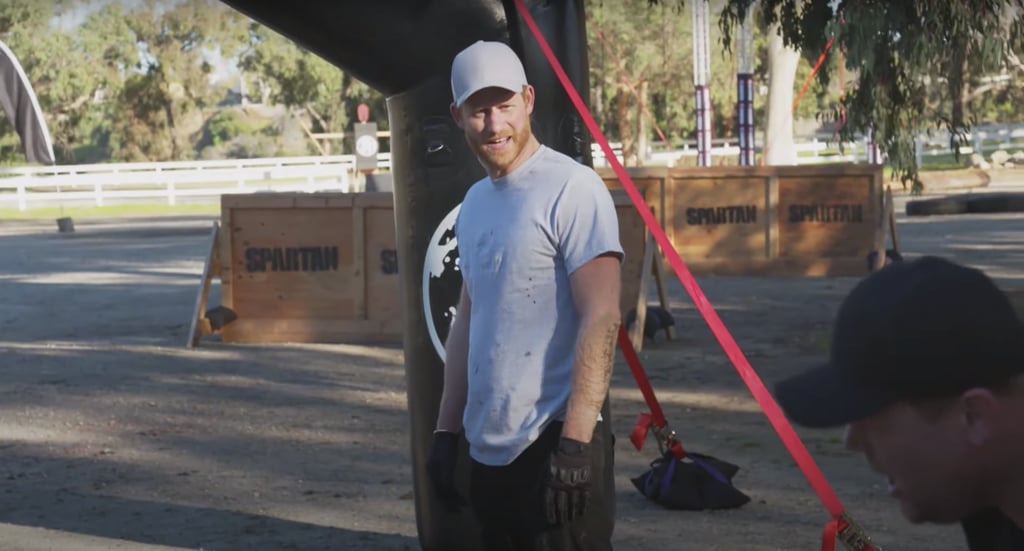 A wise man known as Bruno Mars once said, "Don't believe me, just watch," and watch, we did! On Feb. 26, Prince Harry made a surprise appearance on The Late Late Show With James Corden where they went for a bus tour around Los Angeles, stopped by the house from the Fresh Prince of Bel-Air, and even squeezed in an adorable FaceTime with Meghan Markle. But the coolest part of their interview had to be when James and Harry finished the day with a casual Spartan Race Obstacle Course.

We know that Prince Harry is a military man and served in the Army for 10 years, so he's has had plenty of experience with these obstacles, but what we didn't know is that years later he could still dominate these exercises. As for James, well, he noted his experience as being "very much a member of the BTS Army."

The dynamic duo raced through eight obstacles: they started by simply climbing over a few wooden walls, running through a set of tires, doing a Hercules hoist with weighted bags attached to a rope, then the famed barbed wire crawl over mud, a spear throw, the classic rope climb with a bell at the top, an atlas carry with a 60-pound medicine ball, and lastly, an inverted wall climb into an A-frame obstacle to get over. Sound exhausting? Well, Prince Harry absolutely flaunted his agility and strength and we are impressed! Check out some of the epic moments from their workout ahead, and prepare to be amazed at how little mud Harry had on him after that barbed wire crawl.