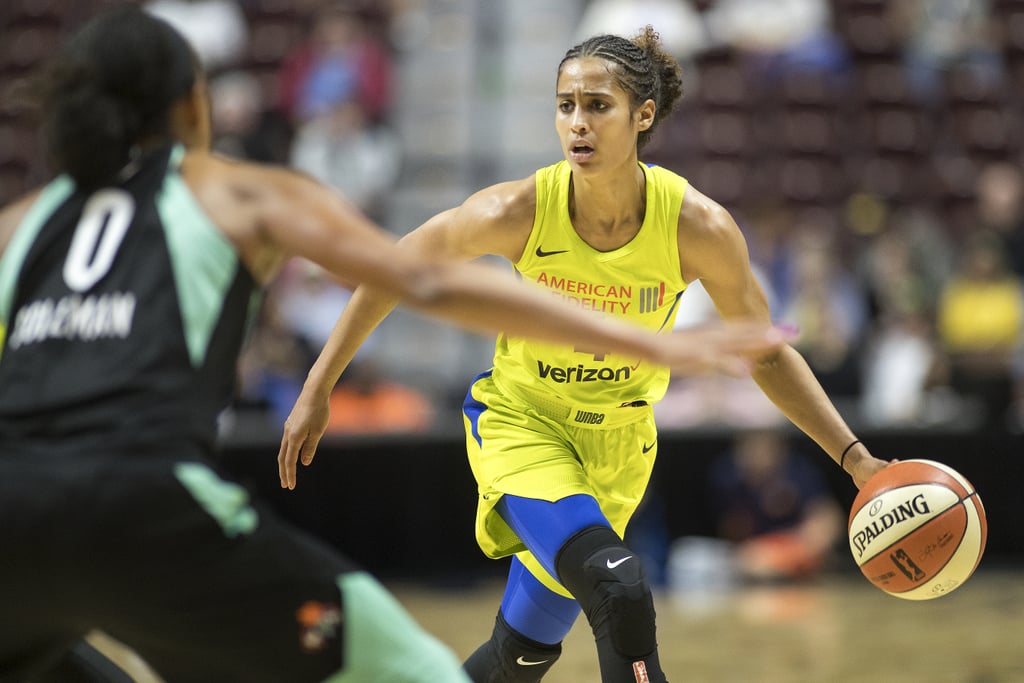 When women find out they are pregnant, they prepare to change many aspects of their lives — from their workouts to their eating habits and everything in between. For WNBA player Skylar Diggins-Smith last year, she continued to play point guard for the Dallas Wings throughout her pregnancy. Over the weekend, the 29-year-old baller revealed on Twitter that she played the 2018 season while pregnant. She's one of the most well-known professional basketball players, and in addition to her stats of being a four-time WNBA All-Star, leading Notre Dame to the NCAA Final Four three times, and so much more, she can add badass mother to that list.

In a series of tweets, the accomplished point guard confronted her critics. "Having no support from your organization is unfortunate," she wrote. "People called me a quitter, said I gave up on my team, etc., etc. Not knowing I took two FULL months away from everything because of postpartum depression. With limited resources to help me be successful mentally/physically. But just wait though . . . KEEP THAT SAME ENERGY." She added, "I played the ENTIRE season pregnant last year! All star, and led league (top 3-5) in MPG . . . didn't tell a soul."

She and husband Daniel Smith first announced they were expecting a child in October 2018, almost two months after her team played its final game in the five-month season. She gave birth to a baby boy in April of this year, and after taking time off to focus on herself and her family, she reportedly received criticism from the team and sat out the 2019 season.

According to HuffPost, if a WNBA player becomes pregnant while under contract, they are supposed to receive half their salary and medical expenses are to be covered by insurance. It's unknown what exactly Skylar was given by the team, but it's clear she did not feel supported. Check out more from Skylar and her fans ahead.

Related:
These Are the 3 Best — and Safest — Workouts to Do While Pregnant
Previous Next Start Slideshow
WNBAPregnancySportsBasketballAthletes