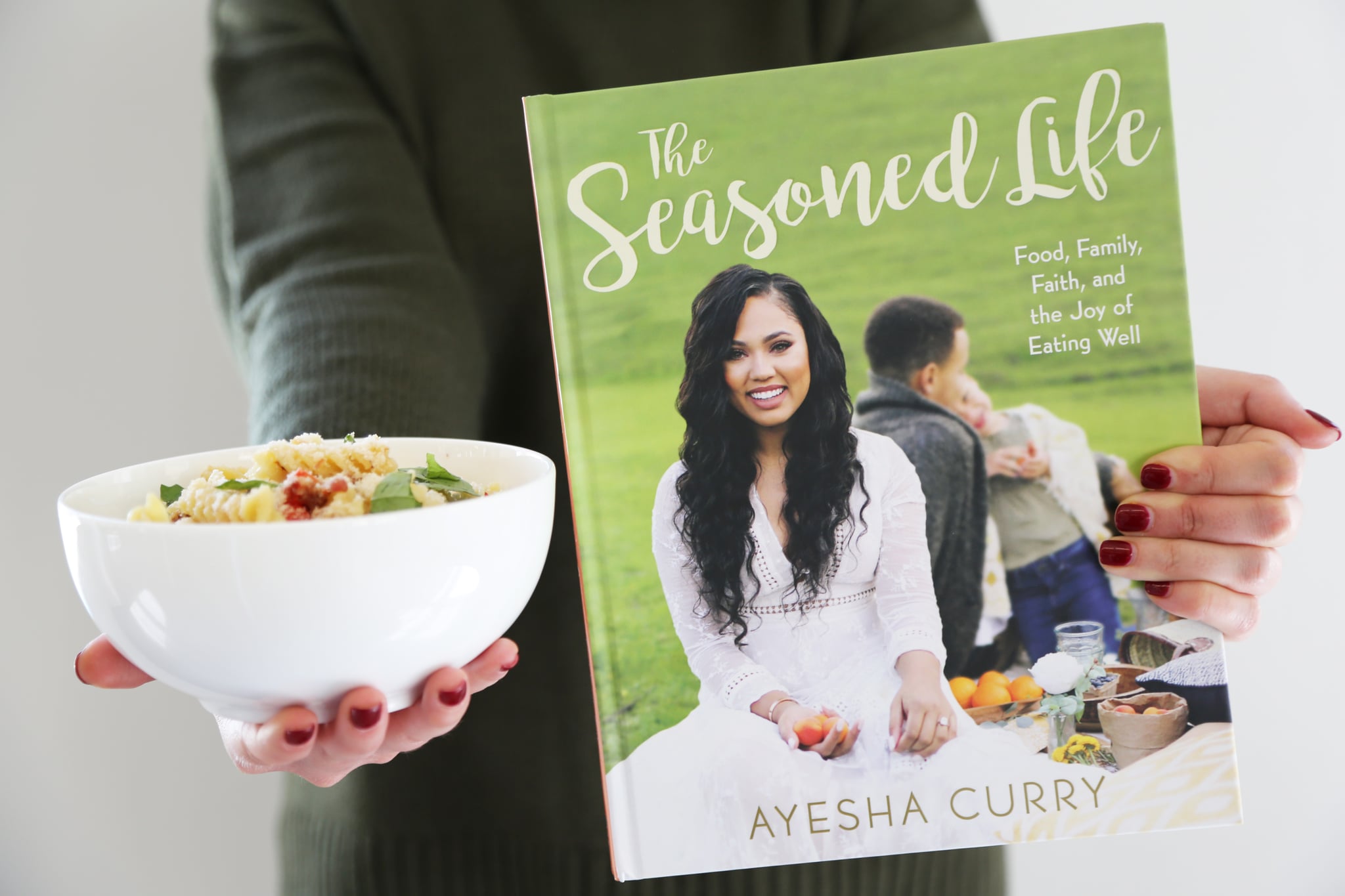 This five-ingredient pasta recipe from Ayesha Curry's new cookbook, The Seasoned Life, will instantly become part of your weekly dinner rotation, as it has for the Food Network host and her husband, Stephen Curry. The NBA star's favorite recipe of Ayesha's is chicken parmesan, which Ayesha admits you won't find in the book, but this pasta is the next best thing. With just five ingredients (egg noodles, pancetta, red bell pepper, parmesan, and basil), you can have a family-friendly dinner on the table in half an hour or less. The star of this dish is the diced pancetta, so don't skimp on it. When it crisps up, it almost tastes like bacon bits and provides the perfect textural contrast to the pasta and the softened peppers. 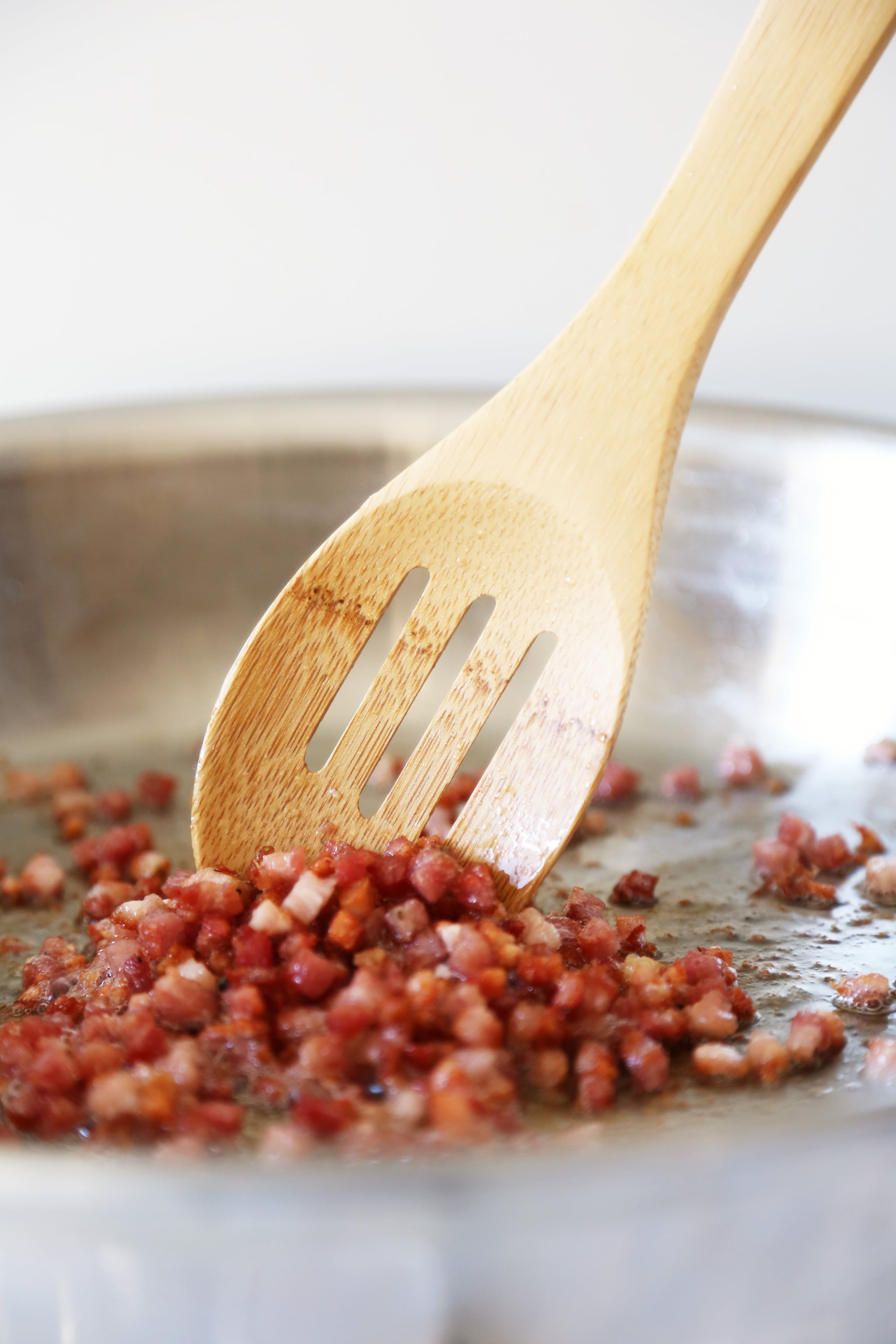 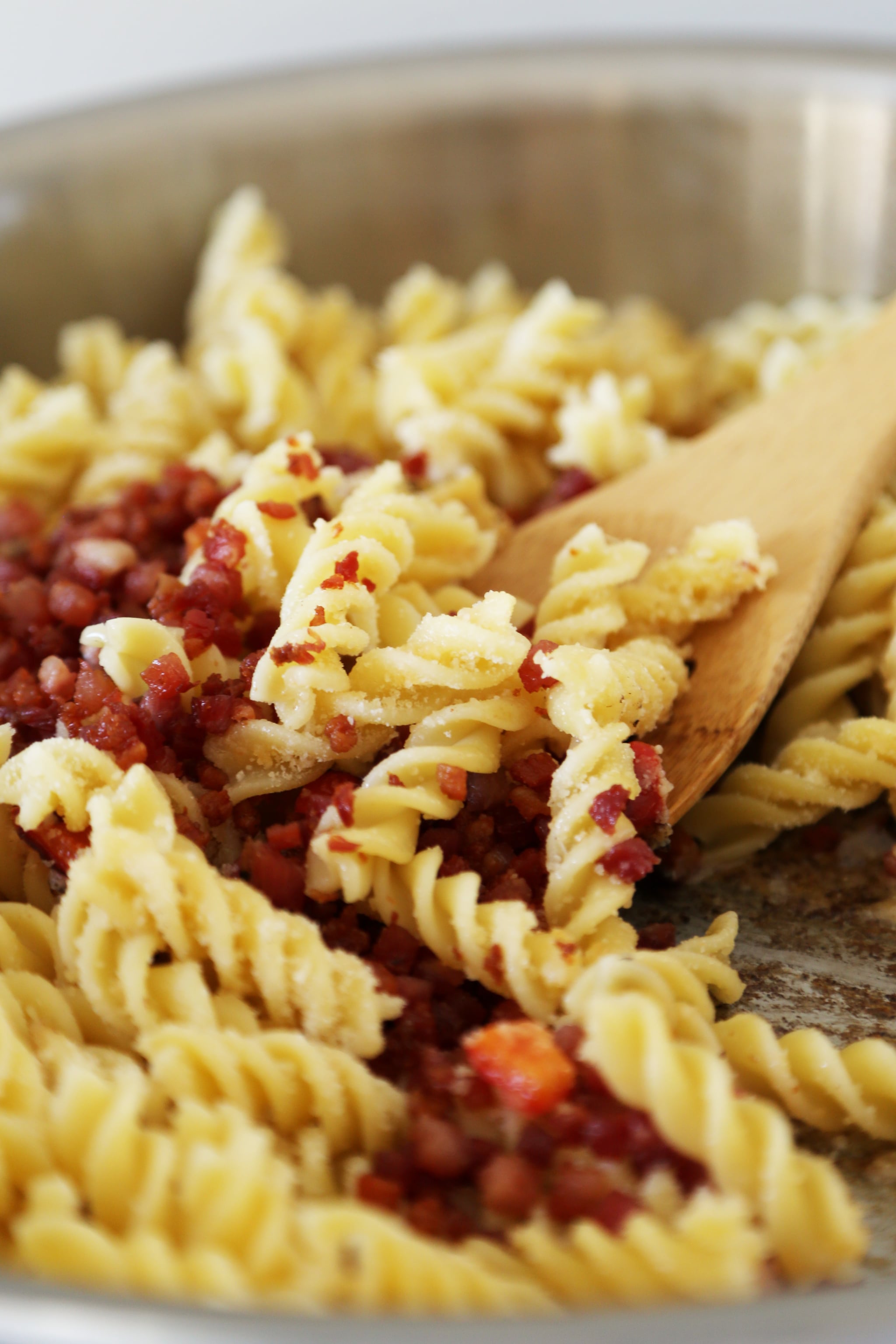 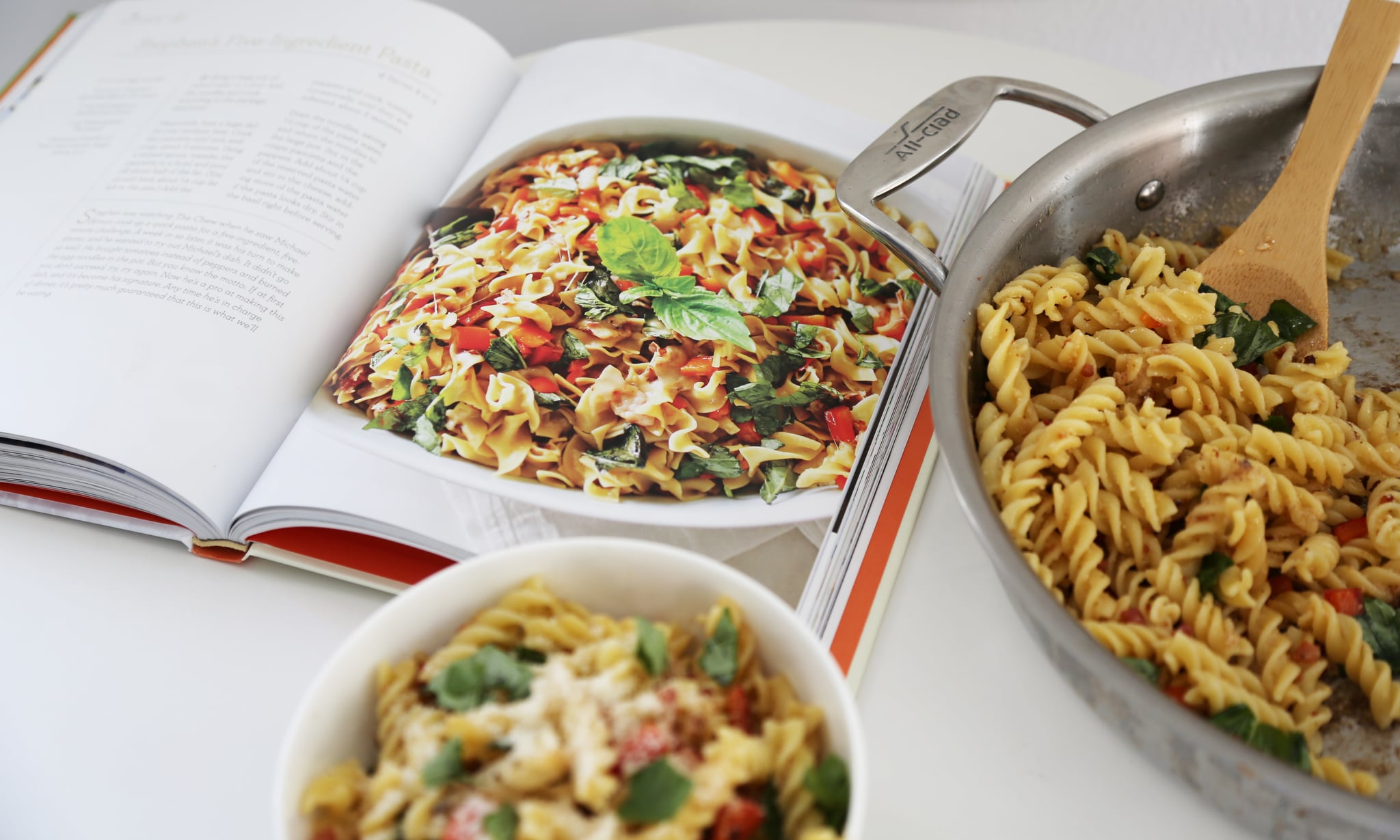 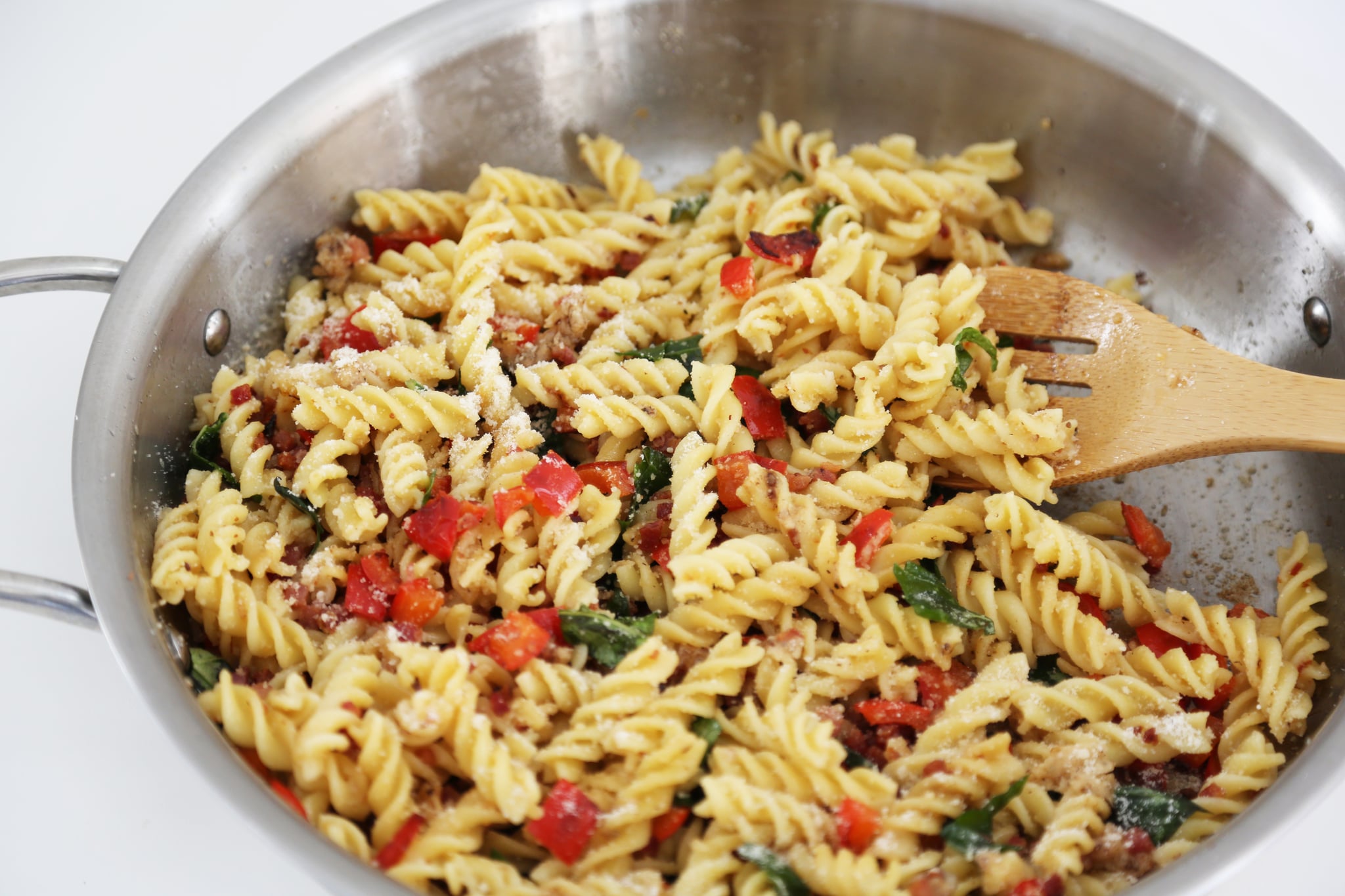 I didn't make any changes to the recipe except the type of pasta. I couldn't find egg noodles at my local grocery store, so I used fusilli instead, but I recommend using egg noodles if you can find them. I'd also go heavy on the salt and pepper at the end, and if you've got lemon juice, red pepper flakes, and white wine or chicken stock to deglaze the pan after the pancetta crisps up, this dish will be even better. But then again, that's where the convenience of five ingredients comes in!

Stephen was watching The Chew when he saw Michael Symon cook up a quick pasta for a five-ingredient, five minute challenge. A week or so later, it was his turn to make dinner, and he wanted to try out Michael’s dish. It didn’t go so well: He bought tomatoes instead of peppers and burned the egg noodles in the pot. But you know the motto: If at first you don’t succeed, try, try again. Now he’s a pro at making this dish, and it’s become his signature. Any time he’s in charge of dinner, it’s pretty much guaranteed that this is what we’ll be eating. 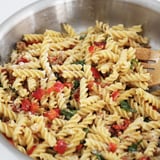 Source: Excerpted from The Seasoned Life, Copyright © 2016 by Ayesha Curry. Used with permission of Little, Brown and Company, New York. All rights reserved. 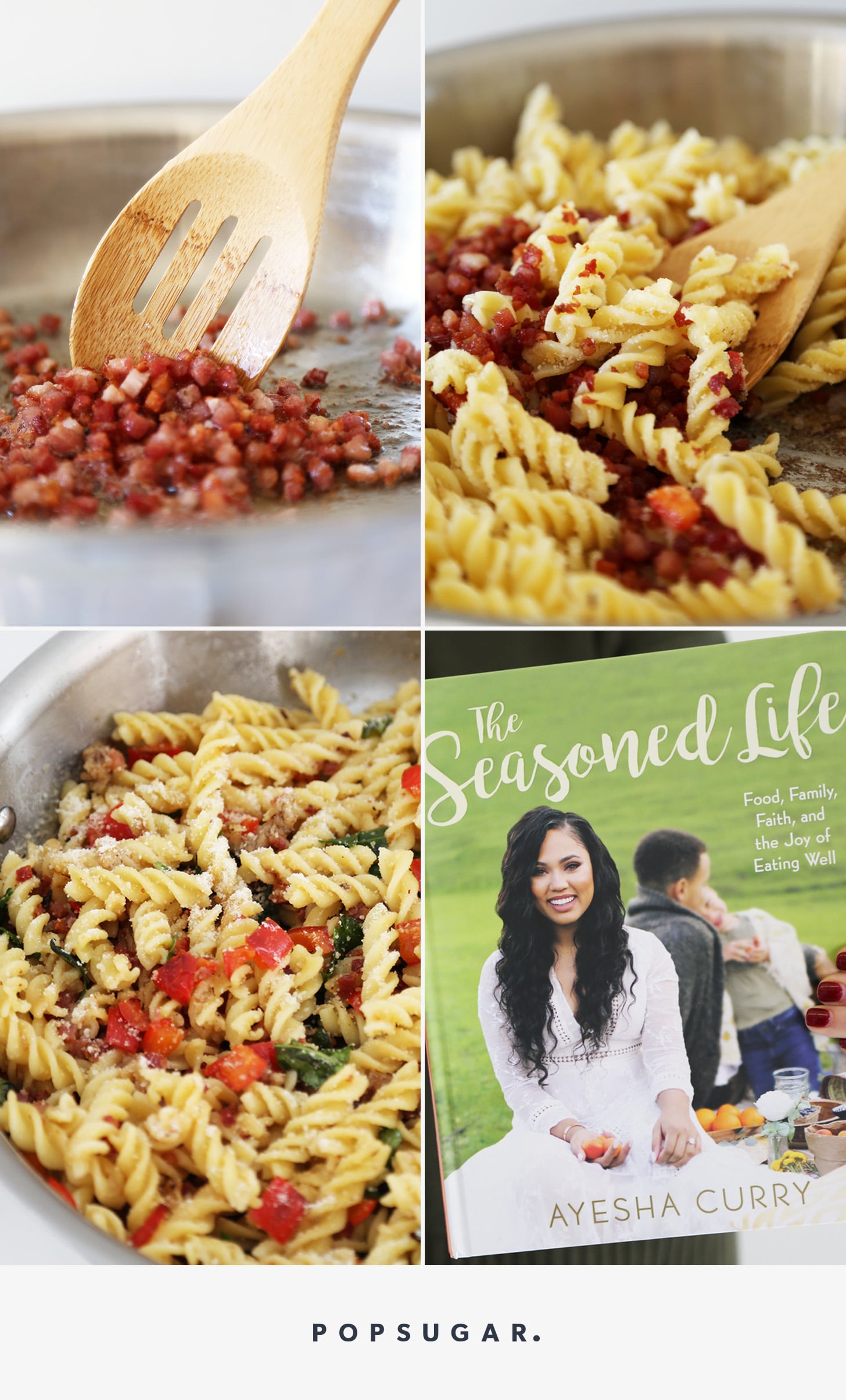 OREO
This 3-Ingredient, No-Bake Oreo Fudge Recipe Is Perfect for Summer
by Kaley Rohlinger 6 hours ago