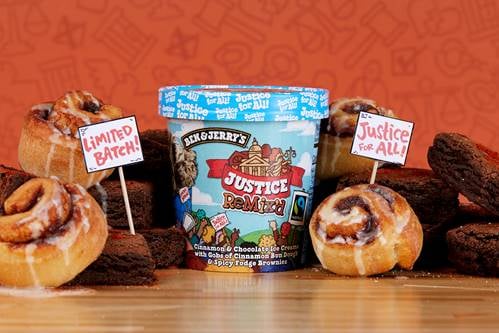 Ben and Jerry's Justice Remix'd flavor packs a powerful message into every spoonful. The beloved ice cream brand teamed up with the Advancement Project National Office to create a tasty treat with chocolate and cinnamon ice cream, in the hopes that it would raise awareness about the need for criminal justice reform in the US.

"Our approach to creating social change is to raise up the work nonprofits are doing on the ground," co-founder Ben Cohen said. "We bring every resource we have to support them — our business voice, our connection with fans, our Scoop Shop community, and, of course, ice cream. Somehow, it's easier to talk about difficult issues over a scoop or two."

What could be more heart-melting than a pint of cinnamon and chocolate ice creams with pieces of cinnamon buns and spicy fudge brownies mixed throughout? Eager shoppers can find it in their local grocery stores and Scoop Shops. The new flavor certainly has the approval of Grey's Anatomy actor Jesse Williams — just watch the video below. Sweeter still is the message behind the Advancement Project itself.

"Our country needs to invest in services that build up communities rather than those that tear them down," Advancement Project National Office Executive Director Judith Browne Dianis said. "That means ending a wealth-based pretrial detention system that locks people up because they are poor, Black or Brown. It means dismantling the school-to-prison pipeline, divesting from criminalizing students, and investing in the creation of high-quality education and services. It's time to reimagine safety and justice."

I'll toast a heaping spoonful of ice cream to that!