All you pizza-lovers on a budget are going to love this easy recipe, brought to you by Beth from Budget Bytes. 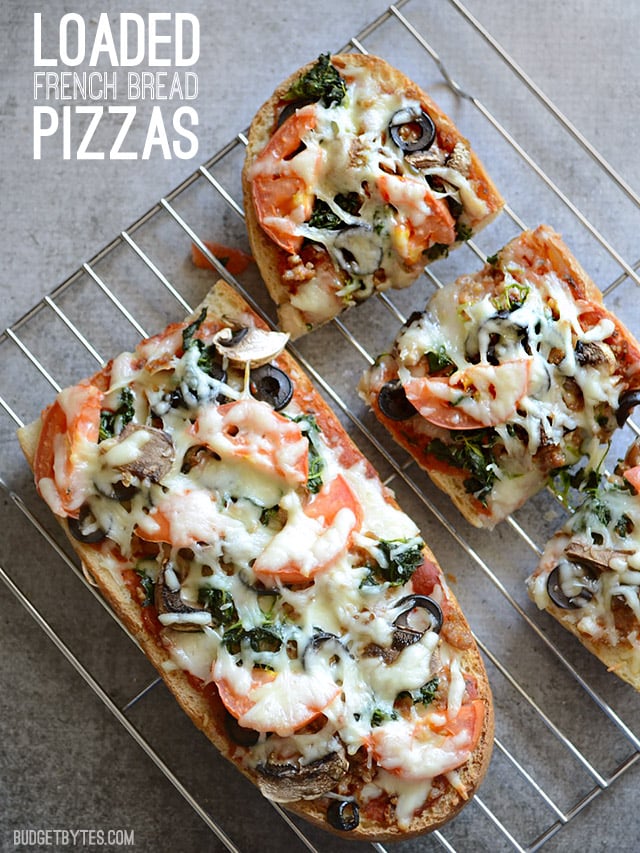 I almost made it through the month without pizza, but when I remembered the 1/2 pound of Italian sausage left over from my skillet meatballs and marinara that was in my freezer, I knew exactly what I had to use it for. I decided to make French bread pizza instead of a regular pizza because it would be easier for me to exert portion control. Pizza is one of those things that I'm usually like, "Just one more slice . . ." and then suddenly the whole thing is gone. With French bread pizzas, I have one little pizza boat thingy and that's the end. The fluffy French bread is a little more filling to me than regular crust, so that helps me press the stop button.

In addition to the Italian sausage, I topped these pizzas with some frozen spinach that I found in the back of the freezer, some sliced Roma tomatoes, and a handful of mushrooms and black olives that I snagged off the salad bar. Unfortunately the cashier charged me for the olive bar instead of the salad bar, so those items came out a little more expensive than I had intended. Still less expensive than buying a whole pack of mushrooms and a can of olives, though. I also mixed up a quick little pizza sauce with a small can of tomato sauce, a few spices, and a dollop of tomato paste that I had previously frozen. I chose to make this simple pizza sauce instead of purchase a jar of pre-made pizza sauce because the least expensive one at the store was going for $1.99.

As you can see, French bread pizza is a GREAT way to use up those odds and ends in your freezer, fridge, and pantry. It feels like a splurge, but it's really a cabinet cleaning strategy. Heh.

Make your pizza sauce first, so the flavors have time to blend while you make the rest of the pizzas. This little 8-ounce can of tomato sauce was only $0.34, compared to 12-ounce jars of pizza sauce that were going for $1.99, so I decided to make my own.

Tomato sauce on its own can be a bit thin, so I added 1 tablespoon tomato paste to help thicken it up (I had some in my freezer, frozen in 1 tablespoon portions). If I didn't have tomato paste on hand, I would have just made do without it, but it definitely makes the sauce better. I also added 1/2 teaspoon dried oregano, 1/2 teaspoon dried basil, and 1/8 teaspoon garlic powder.

Stir all these ingredients together until the tomato paste dissolves into the tomato sauce, and you have yourself a make-shift pizza sauce! If you need to, heat the sauce a little in the microwave or in a small pot to help the paste dissolve.

Brown 1/2 pound Italian sausage and drain off any excess grease.

Shred an 8-ounce block of mozzarella. TIP: whole milk mozzarella melts a LOT better than "part-skim" . . . although it can be hard to find. The part-skim mozz was on sale for $2, so I just used that.

You'll also need to thaw about 1/4 pound of frozen spinach (one cup or so) then squeeze out the extra moisture. Slice up two Roma tomatoes, and grab a handful of sliced mushrooms and olives off the salad bar (because you can get as much or as little of any topping you want that way!).

Cut one large loaf of French bread into three equal length pieces. My French bread was 21 inches long, so I cut it into 7 inch pieces. Then cut each piece open as if you were going to make a sandwich. Lay each of the six pieces, cut side up, on a baking sheet (or two).

Now it's time to top the pizzas! Spread the sauce over each piece from edge to edge. Lay down half the cheese, then the sausage, spinach, mushrooms, olives, and tomatoes. Finally, top with the second half of the cheese. Doing the cheese in two layers like this helps glue all those toppings into place. You can also press the toppings into the bread a bit (just try not to squish the bread TOO hard) to help them stay in place. These things are LOADED.

Finally, bake the pizzas in a preheated 375 degree oven for about 15 minutes, or until the cheese is melty and the crust is crispy. The time will vary a bit depending on your toppings, your oven, and the size of your bread, so just keep an eye on it.

If you want to save some in the fridge for later, bake them half way, or just until the cheese is melted, then let them cool at room temperature. They cool fairly quickly because that bread is so light and fluffy. 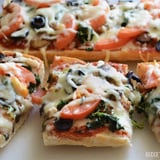 Meal Prep
When It's Too Hot to Turn On the Oven, Here Are 30 Healthy Ideas For Meal-Prep Sunday
by Jenny Sugar 20 hours ago

by Samantha Brodsky 22 minutes ago